One young child per day hospitalized in 2012 and 2013 because of pods; researchers recommend households with young children use traditional detergent instead. 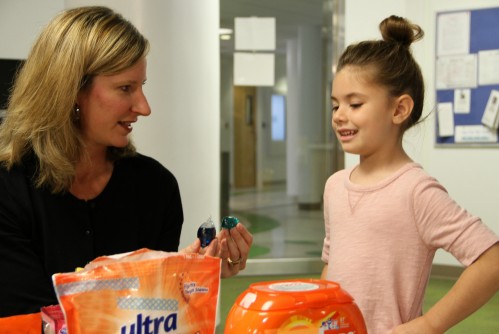 Tracy Mehan from the Center for Injury Research and Policy at Nationwide Children's Hospital talks with a young girl who has trouble distinguishing an actual laundry detergent pod from a look-alike that researchers created with a fruit flavored drink.

Every hour in the U.S., a child swallows, inhales or otherwise comes into contact with the highly concentrated chemicals inside laundry detergent pods. A new study from the Center for Injury Research and Policy at Nationwide Children`s Hospital charted more than 17,000 cases from 2012 through 2013.

Newswise — Laundry detergent pods began appearing on U.S. store shelves in early 2012, and people have used them in growing numbers ever since. The small packets can be tossed into a washing machine without ever having to measure out a liquid or powder. The convenience, though, has come with risks for young children.

A new study from researchers at Nationwide Children’s Hospital found that from 2012 through 2013, U.S. poison control centers received reports of 17,230 children younger than 6 years of age swallowing, inhaling, or otherwise being exposed to chemicals in laundry detergent pods. That’s nearly one young child every hour. A total of 769 young children were hospitalized during that period, an average of one per day. One child died. One and two year-olds accounted for nearly two-thirds of cases. Children that age often put items in their mouths as a way of exploring their environments. Children who put detergent pods in their mouths risk swallowing a large amount of concentrated chemicals. The vast majority of exposures in this study were due to ingestion.

“Laundry detergent pods are small, colorful, and may look like candy or juice to a young child,” said Marcel J. Casavant, MD, a co-author of the study, chief of toxicology at Nationwide Children’s Hospital and medical director of the Central Ohio Poison Center. “It can take just a few seconds for children to grab them, break them open, and swallow the toxic chemicals they contain, or get the chemicals in their eyes.”

Nearly half (48%) of children vomited after laundry detergent pod exposure. Other common effects were coughing or choking (13% of cases), eye pain or irritation (11%), drowsiness or lethargy (7%) and red eye or conjunctivitis (7%).

“It is not clear that any laundry detergent pods currently available are truly child resistant; a national safety standard is needed to make sure that all pod makers adopt safer packaging and labeling,” said Gary Smith, MD, DrPH, the study’s senior author and director of the Center for Injury Research and Policy at Nationwide Children’s Hospital. “Parents of young children should use traditional detergent instead of detergent pods.”

Data for this study came from the National Poison Database System, the most comprehensive and accurate database available for investigation of poisonings in the United States. The study was conducted by researchers at the Center for Injury Research and Policy and the Central Ohio Poison Center, both at Nationwide Children’s Hospital, and The Ohio State University College of Medicine.

The Center for Injury Research and Policy (CIRP) of The Research Institute at Nationwide Children’s Hospital works globally to reduce injury-related pediatric death and disabilities. With innovative research at its core, CIRP works to continually improve the scientific understanding of the epidemiology, biomechanics, prevention, acute treatment and rehabilitation of injuries. CIRP serves as a pioneer by translating cutting edge injury research into education, policy, and advances in clinical care. To learn more about CIRP, visit www.injurycenter.org.