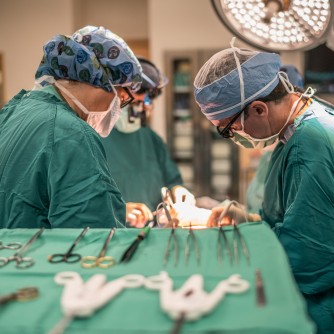 New study of more than 3,500 melanoma cancer patients suggests any survival advantage associated with removing all the lymph nodes in the area closest to the melanoma is too small to justify the complications patients may suffer from having them removed.

Newswise — Many patients with melanoma need a sentinel-lymph-node biopsy to determine if cancer cells have spread there, but a positive finding doesn’t mean all the lymph nodes in the area must be removed, according to a new international study conducted in part by researchers in Utah that may change standard treatment for melanoma patients whose cancer has spread.

The international study involving 63 centers, including Intermountain Healthcare's Intermountain Medical Center and the Huntsman Cancer Institute in Salt Lake City, and more than 3,500 patients, suggests any survival advantage associated with removing all the lymph nodes in the area closest to the melanoma is too small to justify the complications patients may suffer from having them removed.

Approximately one-fourth of the patients in the randomized phase-three trial were being treated for melanoma at Intermountain Medical Center or the Huntsman Cancer Institute.

Findings were published in The New England Journal of Medicine.

Melanoma is a comparatively rare but potentially deadly form of skin cancer. Although it makes up fewer than one percent of all skins cancers, melanoma is responsible for most skin cancer deaths, according to the American Cancer Society. Roughly 87,000 new cases of invasive melanoma are diagnosed in the United States each year.

Lymph nodes are small glands that carry fluids, nutrients, and waste between tissue and the bloodstream. The lymphatic system plays a key role in the body’s immune response to infection and disease.

When a biopsy detects melanoma in a sentinel node, standard treatment has been to remove all the nearby nodes, which sometimes triggers complications, said Tawnya L. Bowles, MD, one of the study authors, and principal investigator at Intermountain Medical Center.

“It can be a very big deal for patients,” said Dr. Bowles. “They can have repeat hospitalizations for infections in their extremities. They can have life-limiting, painful swelling where they can’t do the activities they like to do or wear their usual clothing. It’s a significant, real problem for patients who are affected.”

The new study, called the Multicenter Selective Lymphadenectomy Trial II, enrolled 3,531 patients who had melanoma. Of those, 1,939 patients had an abnormal sentinel-node biopsy and were randomly assigned to one of two groups for further study and treatment.

In the ultrasound group, if the lymph node got bigger or other abnormalities were detected, a needle biopsy was done to look for melanoma. If it was detected, the other lymph nodes were removed. If the ultrasound was normal over the study period, patients kept all but their sentinel lymph nodes and didn’t have more surgery.

The survival rates of the two groups were compared to see if patients who had multiple lymph nodes removed were more likely to be alive three years later compared to those who kept them.

The study found no significant difference in melanoma-specific survival at three years. But for patients who had those lymph nodes removed, the risk of swelling in the affected arm or leg was four times greater compared to whose lymph nodes were intact.

Some in the group whose lymph nodes were left in place had a recurrence in their lymph nodes. When melanoma recurred in a lymph node, the patients were treated and mortality didn’t significantly increase during the study.

Removing the sentinel lymph node for biopsy is of major importance, according to the study authors.

“If the sentinel-node biopsy hadn’t been done, the tumor present in the lymph node would have grown and progressed,” said Dr. Bowles. “Checking that lymph node is really important, but many patients can be spared taking out the others.”

The study raises another question that’s yet to be sorted out. With melanoma, immune therapy is often given as an added, or adjuvant, treatment. But most studies of adjuvant therapy have been done in patients who had all their lymph nodes removed after an abnormal sentinel-lymph-node biopsy.

That means researchers know how well the therapies work in those patients, but not whether immune therapy results would change if the nodes remain in place. The treatment could be just as effective, but isn’t yet proven in clinical studies.

“The question of immune therapy is important, because while removing lymph nodes eliminates the risk that melanoma will spread there, it doesn’t stop melanoma from spreading to organs, bones, and distant lymph nodes,” Dr. Bowles said. “Patients who die typically die of those distant metastases.”

This isn’t the first time that spread of cancer through lymph nodes has been studied. Similar findings regarding treatment when breast cancer spreads to lymph nodes have already changed the standard of care for those patients. A positive sentinel node biopsy no longer automatically means all lymph nodes in the area will be removed.

Dr. Bowles hopes that will be the case with melanoma.

“I hope dermatologists and other healthcare professionals who treat melanoma will understand the sentinel node biopsy is still important, but not all patients need to have follow-up surgery to remove all the other nodes if that sentinel node is positive for melanoma,” she said.

Intermountain Healthcare researchers plan to follow the study-enrolled patients in their clinic, looking for 10-year survival and recurrence rates.

“Because we have a large group of patients who were in the ultrasound group, we hope to learn more about their outcomes. Did they have immune treatment? How did they do over time?” Dr. Bowles said. “We’re looking forward to continued insights and more advancements in the standard of care for melanoma patients.”