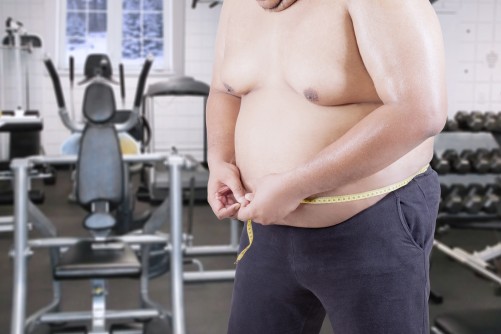 Researchers from the two centers found that abdominal obesity — or having an apple-shaped body — is a strong predictor of serious heart disease in patients who have type 1 or type 2 diabetes, and haven’t displayed any symptoms of heart disease.

Apple-shaped bodies are already associated with metabolic syndrome (which includes high blood pressure, high sugar levels and high cholesterol), as well as coronary artery disease and heart failure, but this new study found that waist circumference is also a strong predictor of left ventricular dysfunction in patients. Metabolic syndrome is often accompanied by excess body fat around the abdomen.

The collaborative team of researchers studied 200 diabetic men and women who had not yet exhibited any coronary disease. The researchers found that even independently of total body weight and body mass index or BMI, abdominal obesity was strongly associated with regional left ventricular dysfunction, which is a common cause of heart disease, including congestive heart failure.

Results of the study will be reported at the 2016 American College of Cardiology Scientific Session in Chicago on Saturday, April 2.

“Our research examined patients with diabetes, who are considered high risk for developing heart disease already, and found that the shape of your body determined if you were at a greater risk to develop left ventricular dysfunction,” said Brent Muhlestein, co-director of research at the Intermountain Medical Center Heart Institute in Salt Lake City.

“This study confirms that having an apple-shaped body — or a high waist circumference — can lead to heart disease, and that reducing your waist size can reduce your risks,” adds Dr. Muhlestein.

Studies show a strong correlation between weight gain and regional left ventricular function — and obesity is a major worldwide health risk. One in three people will have cardiovascular disease in their lifetime, and about a third of them will die from a heart attack or similar malfunction before their heart disease is diagnosed.

The results of the new research expands on the results of a previously published study called faCTor-64, also conducted by researchers at Intermountain Medical Center Heart Institute and Johns Hopkins, which showed that the greater a person’s body mass index, the greater their risk of heart disease.

FaCTor-64 enrolled patients with diabetes who were considered to be at high risk for heart attacks, strokes, or death but had no evidence of heart disease as of yet. Study participants completed randomized screening for coronary artery disease by CT coronary angiography, then received recommendations to change their care or their lifestyles, or continue routine standard diabetes care, based on their results. They were then followed to track future adverse heart events.

During the new study, 200 participants who received CT screenings also had echocardiography to assess their left ventricular function. The left ventricle is the chamber of the heart that pumps oxygen-rich blood to the brain and the body. When there’s a dysfunction in the left ventricle, blood backs up into the lungs and lower extremities, which often leads to heart failure and increases the risk of sudden cardiac arrest.

Although any form of obesity can produce stress on the heart, the new Intermountain Medical Center Heart Institute/Johns Hopkins study shows that abdominal obesity, more so than total body weight or BMI (weight to height ratio), is a strong predictor of left ventricle dysfunction.

“We specifically found that waist circumference appears to be a stronger predictor for left ventricle dysfunction than total body weight or body mass index,” says Boaz D. Rosen, MD, of Johns Hopkins, who is the study’s principal investigator.

Dr. Rosen says further studies are needed to verify these findings. “It will be important to see if these patients are indeed at risk of developing heart failure or coronary artery disease in the future,” he added.

Intermountain Medical Center is the flagship facility for the Intermountain Healthcare system, which is based in Salt Lake City.