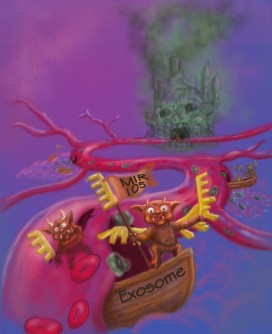 City of Hope researchers found that a microRNA called miR-105 helps cancer metastasize by breaking down the building blocks of blood vessels' barriers, allowing the cancer cells to enter the bloodstream.

Newswise — Metastasis — the spreading of cancer cells from a primary tumor site to other parts of the body — generally leads to poorer outcomes for patients, so oncologists and researchers are constantly seeking new ways to detect and thwart this malicious process. Now City of Hope researchers may have identified a substance that contributes to it: microRNAs, particularly one called miR-105 that is secreted by breast cancer cells.

The findings were published in the April 14 issue of Cancer Cell.

"MicroRNAs were discovered over two decades ago, but it's only recently that the scientific community started looking into their role in cancer," said S. Emily Wang, Ph.D., associate professor in the Department of Cancer Biology and senior author of the study. "When we found out that cancer cells can make and secrete microRNAs, we wanted to investigate their role in interactions between cancer cells and normal tissue."

MicroRNAs are small snippets of genetic code that regulate gene expression. This, in turn, alters the quantity and quality of proteins that are manufactured by those genes. In this particular study, Wang and her team found that miR-105 helps breast cancer metastasize by interacting with the gene TJP1. This gene is responsible for producing a protein, ZO-1, used in the boundaries between blood vessel cells.

These boundaries, called tight junctions, are normally impermeable to most substances, including cancer cells. miR-105's interference leads to the degradation of ZO-1, which makes the junction leaky and allows cancer cells to break free from the primary tumor and enter the bloodstream.

miR-105's ability to break down tight junctions also helps breast cancer cells invade other organs, including the brain. There, miR-105 leads to the degradation of the blood-brain barrier, which also uses ZO-1.

These findings are supported by further research with animal models. In this part of the study, tumors with overexpressed miR-105 led to more extensive metastases in mice. Meanwhile, mice that were given an experimental anti-miR-105 drug had smaller tumors that were less likely to spread. The drug also restored the tight junction integrity of their blood vessels.

From these findings, Wang suggested that miR-105 — which is detectable in the bloodstream — could be used as a biomarker to determine the metastatic potential of a primary breast cancer. It could also be used to catch the beginning of metastasis, giving oncologists enough time to try other treatments before secondary tumors form.

Wang and her team are currently conducting additional preclinical studies on miR-105 and other cancer-secreted microRNAs, with the goal developing a reliable test to screen for these molecules and develop drugs that can target them.