Device May Improve Quality and Frequency of Repair 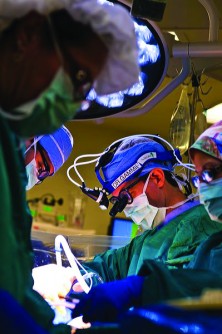 Newswise — Baltimore, November 1, 2017 – A new study has found that a pioneering device to repair heart valves is safe and effective, and can reduce the invasiveness and side effects of conventional mitral valve surgery. The Harpoon Mitral Valve Repair System (H-MVRS), an image-guided device based on technology developed at the University of Maryland School of Medicine (UMSOM), is deployed through a small opening between the ribs, and repairs the heart while it continues to beat. The research was presented at the Transcatheter Cardiovascular Therapeutics (TCT 2017) symposium in Denver, and simultaneously published in JACC, the Journal of the American College of Cardiology.

“The Harpoon device was found to be remarkably safe and effective,” says the study’s principal investigator and an inventor of the device, James S. Gammie, MD, professor of surgery at UMSOM and chief of cardiac surgery at the University of Maryland Medical Center. “The device allowed the surgeons to precisely and effectively reduce the degree of mitral regurgitation without using an open-heart procedure. There were no deaths. Only one patient needed a blood transfusion, and there were no strokes, no need for pacemakers, no readmission to the ICU, and no reintubations,” he says.

Thirty patients with a condition called mitral valve regurgitation (MR) were treated with the device at six clinical centers in Europe, sponsored by the manufacturer of the device, Harpoon Medical, Inc., Baltimore, Md., to determine whether the device meets essential European health and safety requirements.

Three patients required conversion to conventional open-heart mitral surgery, including two cases where poor imaging prevented accurate placement of the tool, while 27 met the primary endpoint. At six months, MR was mild or less in 85 percent (22/26) of patients successfully treated with H-MVRS. The repair was associated with restoration of normal valve function and improvement in the heart’s ability to pump blood, according to the researchers, and the operative times for procedures using the device were approximately half those reported for conventional mitral valve repair.

The H-MVRS is an investigational device. It does not have European CE marking and the U.S. Food and Drug Administration has not approved it for use in patients in the United States.

The H-MVRS is designed to treat degenerative MR, the most common type of heart valve disorder. In MR, a leaky valve lets blood travel in the wrong direction on the left side of the heart, causing shortness of breath, fluid retention, irregular heartbeats and fatigue. MR develops when the small fibrous cords that open and close the valve’s flaps, known as leaflets, are broken or stretched, preventing them from closing tightly and causing the leaflets to bulge or prolapse upward toward the left atrium. The natural cords connect the valve flaps to muscles inside the heart that contract to close the mitral valve, which gets its name because its two flaps resemble a bishop’s mitre.

The device anchors artificial cords on the flaps to take the place of the natural cords. The artificial cords are made of expanded polytetrafluoroethylene (ePTFE), a polymer commonly used as sutures in cardiac surgery.

Surgeons insert the device into the beating heart through a tiny opening in the ribcage and, using echocardiographic imaging, guide it to the surface of the defective mitral flaps. When the surgeon determines the optimal placement for an artificial cord, the device is actuated and a specially designed needle makes a tiny hole and sends the cord material through the flap. The needle is then withdrawn and the cord of ePTFE is tightened to form a double-helical knot to hold it in place. The sequence is repeated for the desired number of knots (usually four to six). The other end of the cord is adjusted for optimum length and tied to the outside layer of the heart, the epicardium.

“Over the past five years, our faculty has increasingly engaged in entrepreneurial and technology transfer activity – with significant increases in the number of U.S. and foreign patents issued, technology inventions licensed and start-up companies formed,” says UMSOM Dean E. Albert Reece, MD, PhD, MBA, vice president for medical affairs at the University of Maryland and the John Z. and Akiko K. Bowers Distinguished Professor. “This invention by Dr. Gammie is an excellent example of how new devices and therapies developed here have tremendous potential for treating patients and ultimately saving lives.”

The device was previously tested in Poland. U.S. testing of the device may begin in 2018.

DISCLOSURE: The study was funded by Harpoon Medical, Inc. Dr. Gammie and three others on the research team report ownership of stock and/or options to purchase stock in Harpoon Medical. At the present time, the US Food and Drug Administration has not approved the H-MVRS for patients in the United States.

Commemorating its 210th Anniversary, the University of Maryland School of Medicine was chartered in 1807 as the first public medical school in the United States. It continues today as one of the fastest growing, top-tier biomedical research enterprises in the world -- with 43 academic departments, centers, institutes, and programs; and a faculty of more than 3,000 physicians, scientists, and allied health professionals, including members of the National Academy of Sciences, and a distinguished recipient of the Albert E. Lasker Award in Medical Research.  With an operating budget of more than $1 billion, the School of Medicine works closely in partnership with the University of Maryland Medical Center and Medical System to provide research-intensive, academic and clinically-based care for more than 1.2 million patients each year. The School has over 2,500 students, residents, and fellows, and nearly $450 million in extramural funding, with more than half of its academic departments ranked in the top 20 among all public medical schools in the nation in research funding. As one of the seven professional schools that make up the University of Maryland, Baltimore campus, the School of Medicine has a total workforce of nearly 7,000 individuals. The combined School and Medical System (“University of Maryland Medicine”) has a total budget of $5 billion and an economic impact of nearly $15 billion on the state and local community. The School of Medicine faculty, which ranks as the 8th-highest public medical school in research productivity, is an innovator in translational medicine with 600 active patents and 24 start-up companies. The School works locally, nationally, and globally, with research and treatment facilities in 36 countries around the world. Visit medschool.umaryland.edu/

The University of Maryland Medical Center (UMMC) is comprised of two hospitals in Baltimore: an 800-bed teaching hospital – the flagship institution of the 12-hospital University of Maryland Medical System (UMMS) – and a 200-bed community teaching hospital, UMMC Midtown Campus. UMMC is a national and regional referral center for trauma, cancer care, neurocare, cardiac care, diabetes and endocrinology, women’s and children’s health, and has one of the largest solid organ transplant programs in the country. All physicians on staff at the flagship hospital are faculty physicians of the University of Maryland School of Medicine. At UMMC Midtown Campus, faculty physicians work alongside community physicians to provide patients with the highest quality care. UMMC Midtown Campus was founded in 1881 and is located one mile away from the University Campus hospital. For more information, visit www.umm.edu.