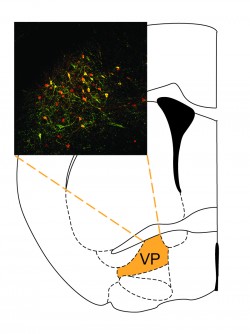 Cartoon schematic and fluorescent image highlighting cells in the ventral pallidum that were studied. 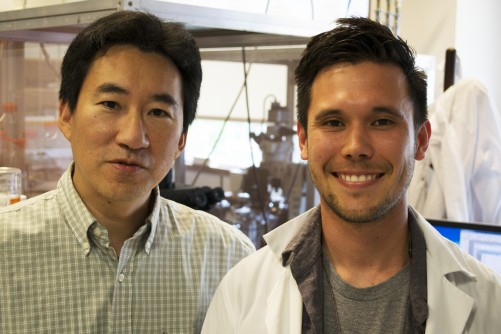 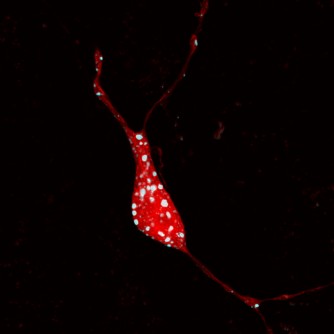 Zoomed image of a ventral pallidal neuron cell body (red) and sites of synaptic contact – areas where cells transmit information to and from one another.

Newswise — University of California San Diego scientists have linked specific wiring in the brain to distinct behavioral symptoms of depression.

In a study published in the journal Cell, researchers in UC San Diego’s Division of Biological Sciences found brain circuits tied to feelings of despair and helplessness and were able to alleviate and even reverse such symptoms in mice studies.

“We took an approach of studying depression in the sense that different brain areas and circuits of the brain might mediate or contribute to very discrete aspects of depression,” said study first-author Daniel Knowland, a UC San Diego graduate student. “For example, brain area A might contribute to loss of appetite, brain area B to social withdrawal and so forth.”

Senior author Byungkook Lim, an assistant professor in the Neurobiology Section, said the results require much more study and evaluation to be applied to humans with depression, but the new research in animal models provides solid grounding.

“This is one of the first studies providing clear evidence showing that different brain circuitry is involved in different types of depressive behavior with specific symptoms,” said Lim. “Each area of the brain is different with distinct cell types and connectivity, so if we can confirm that one area of circuitry is more involved in a particular symptom than another, we may eventually be able to treat a depression patient more efficiently than treating everyone the same way.”

The researchers employed several tools to track brain pathways and specific areas of neurons involved in specific behaviors, including imaging techniques and social strategy behavioral models. Two populations of neurons were identified in the brain’s ventral pallidum region (part of the basal ganglia) as key to underlying depressive behavior.

The new study found that specifically modifying pathways in these two areas in a mouse displaying depression led to improved behavioral changes similar to those of a healthy mouse. More importantly, this study provides strong insight to understanding the interaction between several brain areas in depression. Previous studies have mainly focused on the role of certain brain areas in isolation. Researchers in the new study were able to examine connections across multiple regions and how one impacted the other.

In addition to Knowland and Lim, coauthors include UC San Diego’s Varoth Lilascharoen,