Newswise — Does your toddler’s video chat with Grandma equal quality interaction time, or just more “screen” time entertainment? A team of Lafayette College psychology researchers took a closer look at young children and video interactions and made some surprising discoveries about what kids aged 1- to 2-years-old do and don’t get out of FaceTime interactions on a screen.

Professor Lauren J. Myers, Ph.D., a developmental psychologist who studies children’s cognitive and social-cognitive development, and her team at the Lafayette Kids Lab at Lafayette College in Easton, Pa., will publish their study "Baby FaceTime: Can toddlers learn from online video chat?" in the forthcoming issue of the journal Developmental Science.

Many families with young children use video chat to connect with family and friends--but what do children understand about the on-screen people and content of these interactions? The American Academy of Pediatrics discourages screen time for kids under 2 years because children who watch a lot of media often have poor language skills, and they miss out on other activities that would be more developmentally appropriate. However, there may be a difference between putting a baby in front of a television and having an interactive exchange via video chat. “In this study, we tested whether young children form relationships with and learn from people via video chat,” says Myers.

Myers and her Lafayette students, Rachel B. LeWitt, Renee E. Gallo and Nicole M. Maselli, sought to find new answers to questions about why children under 2 years old seem to learn better in person than from video. The researchers evaluated 1- to 2-year-old children’s learning from video chat by manipulating social contingency: 60 children experienced one week of either real-time FaceTime conversations or pre-recorded videos (30 in each group) as the partner taught novel words, actions and patterns. The researchers found that children paid attention and responded to their on-screen partners, but only children who experienced interactive video chat responded in sync with the partner, such as clapping to imitate after the partner had clapped.

After one week of video chatting, children in the FaceTime (live) condition learned social information—that is, they preferred and recognized someone they had previously only ‘met’ via video-chat—and cognitive information, learning new words and patterns. Learning occurred from video chat only when children talked to an on-screen “partner” who responded to them in real time, and learning did not occur when the partner was pre-recorded and couldn’t actually see or hear the child. Myers says they found that video chat makes learning possible for children under 2 years old because it mimics in-person interaction—when it created a situation in which the on-screen person can respond to the child accurately in a back-and-forth conversation.

According to the Lafayette study, starting at about 17 months, children begin to get something out of live video interaction with real people and are able to apply the interaction to people--like Grandma and other people they know--with whom they have a relationship in real life. “They start to understand who that person is on the screen, and they’re able to get something meaningful out of the live video interaction with them,” says Myers.

While Myers says it’s clear that these video chat interactions represent a form of quality time, she notes that the same does not hold true to video interactions designed to seem “real” but are not. “We found evidence that young kids can tell the difference between live interactions and the pre-recorded ‘fake’ interactions that included pauses after questions and ‘calls to respond’ similar to those featured in Dora the Explorer and other popular children’s programs on TV,” she says.

The study will appear online prior to publication in Developmental Science as an "Early View" on July 15 at http://onlinelibrary.wiley.com/journal/10.1111/(ISSN)1467-7687/earlyview

You can find the Lafayette Kids Lab http://www.sites.lafayette.edu/kidslab/who-we-are/ and watch a video abstract of this study at https://youtu.be/rTXaAYd5adA 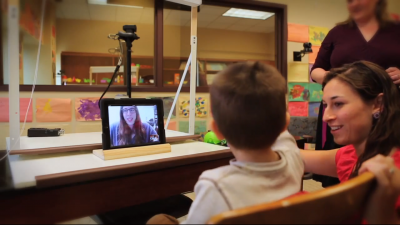 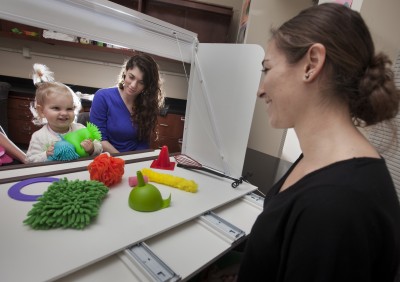