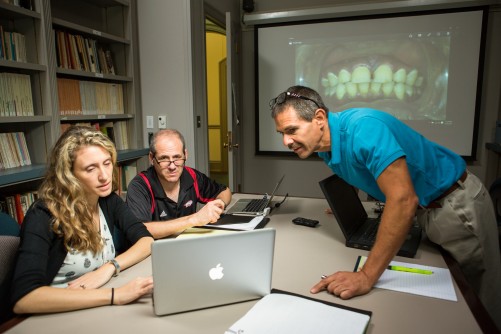 Newswise — FAYETTEVILLE, Ark. – Findings from the first comprehensive study on the oral health of a population in transition from a foraging, wild-food diet to an agriculture-based diet indicate that oral health is affected not just by diet, but also by gender and behavior differences between men and women.

“The transition from hunting and gathering to agriculture is routinely associated with a decline in oral health,” Ungar said, “because of increased consumption of carbohydrates and growth of bacterial colonies in dental plaque linked to the development of tooth decay.”

The team studied the oral health of the Hadza, a population in Tanzania that is in transition from a foraging, wild-food lifestyle to agricultural food consumption and identified several variables that could influence tooth decay and periodontal disease, from sex differences in diet to smoking habits.

All foragers in the study exhibited some degree of cavities, periodontal disease and gross wear on teeth, indicating that there were more factors involved in their oral health than just whether people were living in the bush or a village setting.“Our results show that a person’s sex and where they live really influences how healthy their teeth are,” Crittenden said. “Comparing Hadza village camps to bush camps shows major difference, but only when you break out the sample by biological sex. Living in the same environment, with access to the same resources, men and women show different dietary patterns. Understanding how these patterns play out among the Hadza can inform our understanding of how they played out in prehistory.”

The discovery that men and women in the same environment, with the same resources available to them, had different levels of oral health raises questions about conventional wisdom concerning the effects of the transition from hunting and gathering to an agricultural lifestyle on oral health. The team plans to study further each factor in the Hadza transitional population, from diet to behavior and life history.