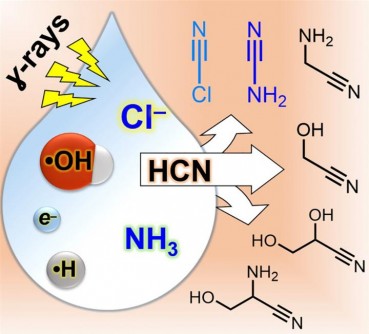 Starting from hydrogen cyanide, the one-pot synthesis of cyanamide and precursors to simple sugars in water -- using gamma rays in the presence of ammonium and chloride salts -- offers a way forward for engineering complex mixtures that can evolve important, potentially prebiological compounds.

Newswise — One of the most fundamental unexplained questions in modern science is how life began. Scientists generally believe that simple molecules present in early planetary environments were converted to more complex ones that could have helped jumpstart life by the input of energy from the environment. Scientists consider the early Earth was suffused with many kinds of energy, from the high temperatures produced by volcanoes to the ultraviolet radiation beamed down by the sun. One of the most classic studies of how organic compounds could have been made on the early Earth is the Miller-Urey experiment, which showed you electrical discharges simulating lightning can help make a variety of organic compounds, including amino acids, which are basic building blocks of all life. Another important source of energy in planetary environments is high-energy radiation, which has various sources including radioactive decay of naturally occurring chemical elements such as uranium and potassium. Research led by Yi Ruiqin and Albert Fahrenbach from the Earth-Life Science Institute (ELSI) at Tokyo Institute of Technology, Japan, has recently shown that a variety of compounds useful for the synthesis of RNA, are produced when simple compound, combined with sodium chloride, are exposed to gamma rays.

This work importantly brings us one step closer to understanding how RNA, which is widely thought to be a candidate molecule for helping start life, could have arisen abiotically on early Earth. Due to its complexity, making RNA "from scratch" under primitive solar system conditions is no easy task. Biology is great at it, because it has evolved over billions of years to do the job with amazing efficiency. Before life emerged, there would have been little in the environment that would have assisted in making RNA. These researchers found that sodium chloride - or common table salt - can assist in making the necessary building blocks for RNA. Sodium chloride is the chemical compound that makes the sea salty, thus it is highly likely this process could occur on primitive planets, including Earth.

The most challenging aspect of this work was figuring out that salt, specifically the chloride component, played a crucial role in these reactions. Typically, chemists ignore chloride in their reactions. When chemists conduct reactions in water, it is highly likely at least some chloride is in there anyway, though most of the time it just sits idly by as a "spectator." It often doesn't play a significant role in the reactions chemists are interested in, it's just part of the background a lot of the time. These researchers found out though, that this was not the case in their experiments, and it took them some time to figure that out. What they eventually deduced was that the ionizing radiation they were using as the energy source to drive their reactions causes chloride to lose an electron and become what is known as a "radical". As the name suggests, the chloride is then no longer so mild-mannered and becomes much more chemically reactive. Once the chloride is activated by gamma radiation, it is free to help construct other high energy compounds which finally can help build up complex RNA molecules.

While these researchers haven't yet coaxed their reactions all the way to RNA, this work shows that there is now nothing in principle which should stop this from occurring. The question now is not so much how to make all the necessary building blocks to make RNA, but how to combine them in a "warm little pond" to make the first RNA polymers. One of the major challenges to this is understanding how other molecules, that is, other than those important for making RNA, might affect this process. The authors think this could be pretty "messy" chemistry in the sense that a lot of other molecules, which could interfere with this process, would be made at the same time. Whether these other molecules will interfere with RNA synthesis, or even have a beneficial effect, is the future focus of these scholars' research. Understanding very complex mixtures of chemicals is not only a challenge in origins of life research, but a major challenge for organic chemistry in general.

Tokyo Tech stands at the forefront of research and higher education as the leading university for science and technology in Japan. Tokyo Tech researchers excel in fields ranging from materials science to biology, computer science, and physics. Founded in 1881, Tokyo Tech hosts over 10,000 undergraduate and graduate students per year, who develop into scientific leaders and some of the most sought-after engineers in industry. Embodying the Japanese philosophy of "monotsukuri," meaning "technical ingenuity and innovation," the Tokyo Tech community strives to contribute to society through high-impact research. http://www.titech.ac.jp/english/

Launched in 2012, ELSI is one of Japan's ambitious World Premiere International research centers, whose aim is to achieve progress in broadly inter-disciplinary scientific areas by inspiring the world's greatest minds to come to Japan and collaborate on the most challenging scientific problems. ELSI's primary aim is to address the origin and co-evolution of the Earth and life.

The World Premier International Research Center Initiative (WPI) was launched in 2007 by the Ministry of Education, Culture, Sports, Science and Technology (MEXT) to help build globally visible research centers in Japan. These institutes promote high research standards and outstanding research environments that attract frontline researchers from around the world. These centers are highly autonomous, allowing them to revolutionize conventional modes of research operation and administration in Japan.