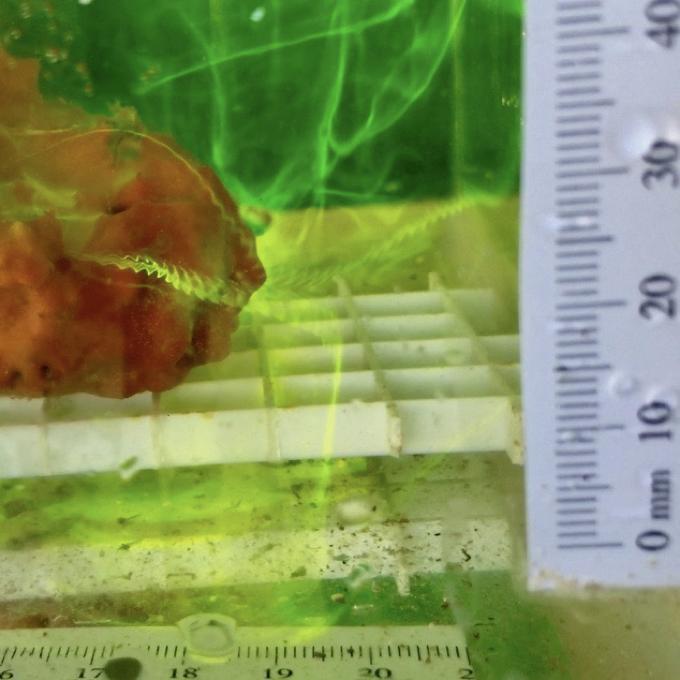 The active pumping of seawater by the sponge Mycale grandis can be seen in distinct jets of Fluorescein dye expelled by the sponge. 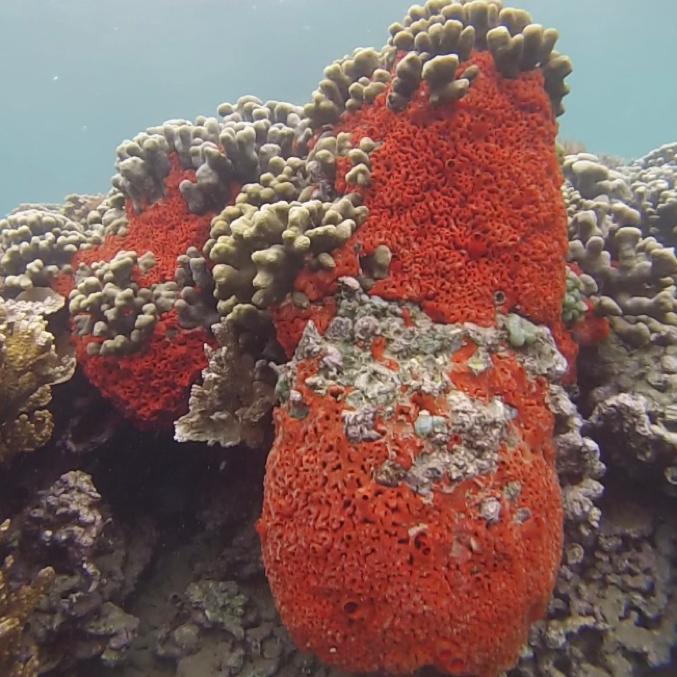 The sponge Mycale grandis overgrowing coral on the reef in Kāneʻohe Bay.

Newswise — Research conducted at the University of Hawaiʻi (UH) at Mānoa School of Ocean and Earth Science and Technology (SOEST) on a marine sponge in Kāneʻohe Bay, O?ahu revealed a unique feeding strategy, wherein the sponge animal acquires important components of its diet from symbiotic bacteria living within the sponge.

Coral reefs are one of Hawaiʻi's most important natural resources and support fisheries and the state's economy. Marine sponges are important components of coral reef ecosystems, but in Hawaiʻi, the Indo-Australian sponge Mycale grandis is an invasive alien species that was only first documented in the islands in the late 1990s. M. grandis is now found in and near major harbors of the Main Hawaiian Islands as well as within Kāneʻohe Bay.

Alien and invasive species are one of the threats to endemic and native species, which are vulnerable due to their evolution in the remote archipelago. M. grandis competes with coral for space on the reef, but unlike coral, which build hard rocky substrate with their skeletons, M. grandis is a soft, non-reef building animal and does not provide the same habitat for other reef organisms.

In a study led by Dr. Joy Leilei Shih for her doctoral research at UH Mānoa, the diet of M. grandis sponges collected from Kāneʻohe Bay was elucidated by using a new application of a technique that relies on naturally occurring stable isotopes to understand the origin of specific compounds in the tissues of plants and animals. In this case, the team tested where amino acids, the building blocks of proteins in tissues, in the sponge came from. Did they originate from food caught and filtered from seawater or were they supplied to the sponge from the microbes living within the sponge itself?

When one organism consumes another, elemental properties in the prey are conserved and leave behind a unique chemical pattern with the predator. By assessing the chemical difference between predator and prey tissues, Shih and colleagues found the diet of sponges did not originate from photosynthesizing microbes (such as seen in corals) and M. grandis feeding did not follow general patterns of other multicellular animals. Instead, the isotopic patterns of the sponge and its symbiotic microbes were not different from one another, indicating the sponge obtains nutrition through the uptake of amino acids originating from their symbiotic microbes.

"While we knew that the symbionts of sponges play an important role in their diet, the mechanism by which it occurred was unknown," said Shih. "The only way to produce the observed amino acid isotopic pattern, or fingerprint, if you will, is through the direct transfer of amino acids from their symbiotic bacteria."

"The patterns we detected in M. grandis and its symbionts are very interesting, as they suggest sponges may be actively capturing materials in seawater to support the needs of their microbial community, which in turn supply the sponge with essential tissue building blocks," said Dr. Chris Wall, a postdoctoral researcher at UH Mānoa and a co-author on the study.

"The symbiosis we see between the sponge and its microbial community is remarkable," said Shih. "We know that sponges rely on their symbionts for a variety of purposes including chemical defense, metabolite removal, and now we have insight into this well-tuned and efficient feeding strategy and the major role these microbial symbionts play in sponge nutrition. The intimate relationship between sponges and their symbionts developed over their long evolutionary history. Sponges are the oldest multi-cellular animal on earth. That's why they are so well-adapted and resilient."

Marine sponges in Hawaiʻi are not well studied. A study by the Smithsonian Institution-organized MarineGEO Hawaiʻi program in 2017 identified 150 previously unseen sponge species in Hawaiʻi, roughly one third of which are new species. Previously, only about 10 sponge species were known to exist in Kāneʻohe Bay. The researchers' new approach to investigating sponge feeding strategies can be applied to future research on other marine sponges in Hawai'i and elsewhere. Sponges play an important role in the nutrient dynamics of coral reefs, and in the future, sponges may rise to dominate coral reefs as corals decline from direct pressure from human activity and climate change. This work provides new insights into the biology of sponges and shows the importance of marine microbes to the diet of an invasive sponge.

Caption: The active pumping of seawater by the sponge Mycale grandis can be seen in distinct jets of Fluorescein dye expelled by the sponge.

Caption: The sponge Mycale grandis overgrowing coral on the reef in Kāneʻohe Bay.