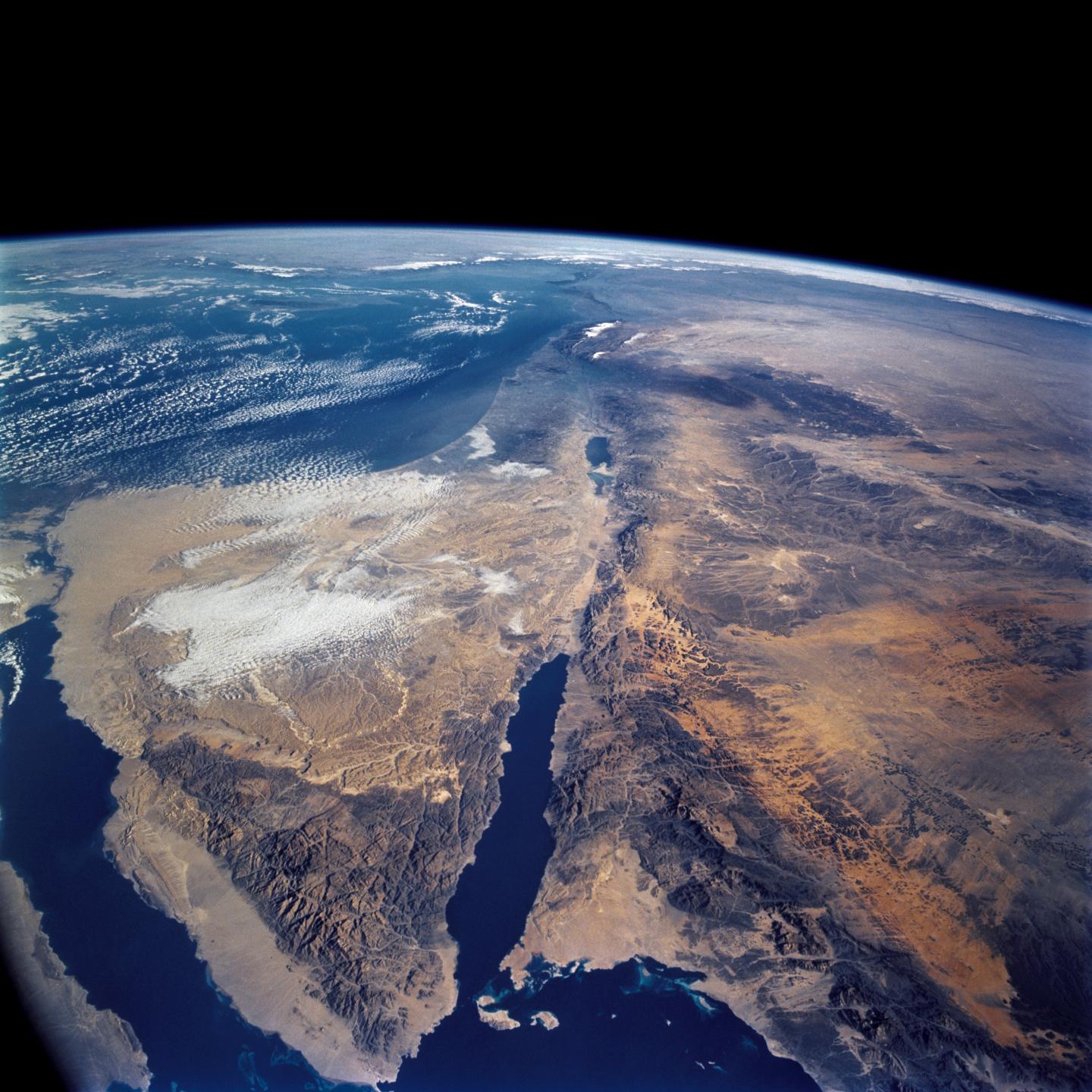 An aerial view of the Dead Sea taken by the Hubble Space Telescope. New research explains why salt crystals are piling up on the deepest parts of the Dead Sea's floor, a finding that could help scientists understand how large salt deposits formed in Earth's geologic past. 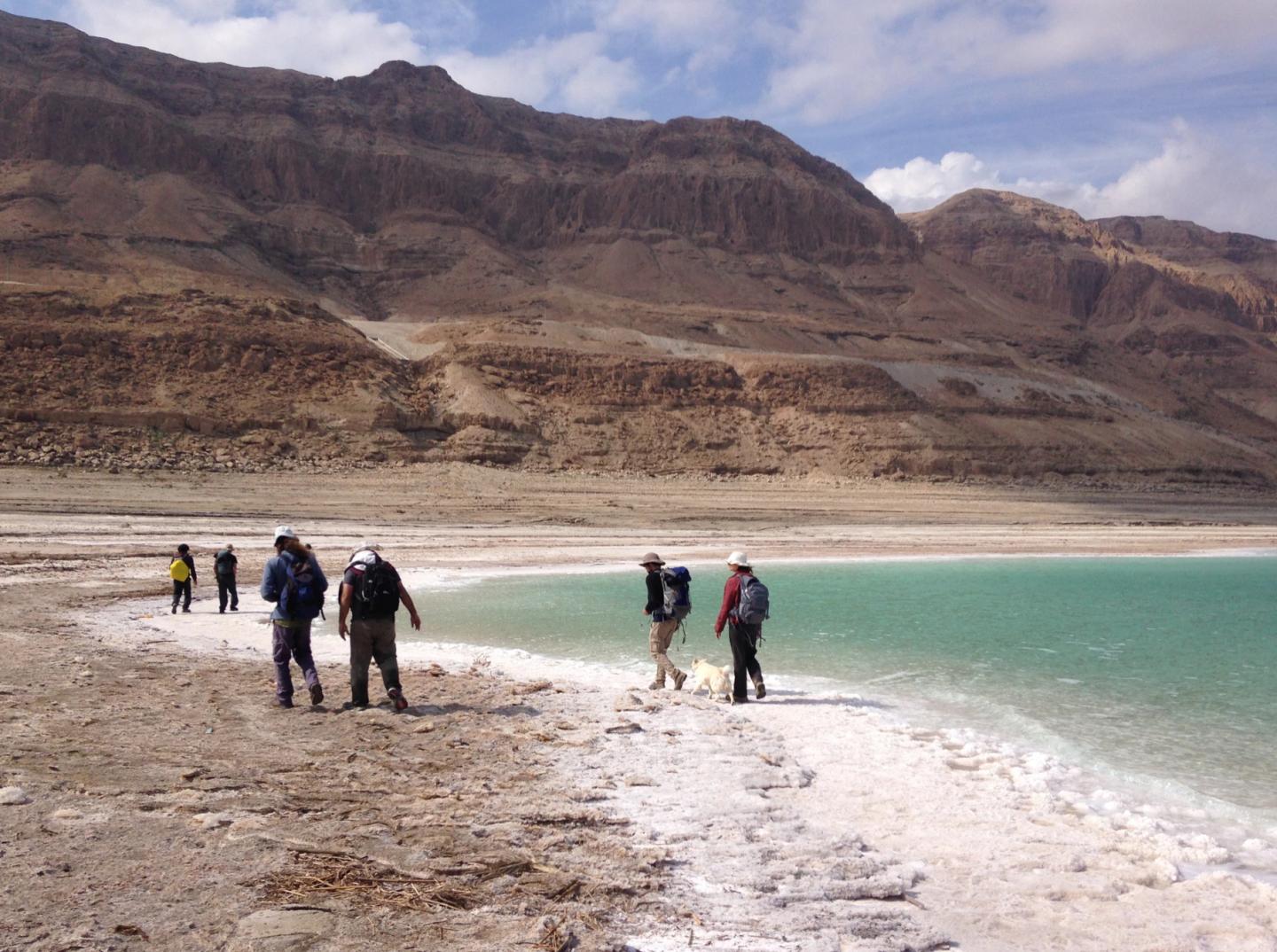 Researchers walk along the bank of the Dead Sea, one of Earth's saltiest bodies of water. It is nearly ten times saltier than the ocean.

Newswise — WASHINGTON--New research explains why salt crystals are piling up on the deepest parts of the Dead Sea's floor, a finding that could help scientists understand how large salt deposits formed in Earth's geologic past.

The Dead Sea, a salt lake bordered by Jordan, Israel and the West Bank, is nearly 10 times as salty as the ocean. Humans have visited the Dead Sea for thousands of years to experience its purported healing properties and to float in its extremely dense, buoyant waters, and mention of the sea goes back to biblical times.

Much of the freshwater feeding the Dead Sea has been diverted in recent decades, lowering the sea's water levels and making it saltier than before. Scientists first noticed in 1979, after this process had started, that salt crystals were precipitating out of the top layer of water, "snowing" down and piling up on the lakebed. The salt layer on the lake floor has been growing about 10 centimeters (4 inches) thicker every year.

The process driving this salt crystal "snow" and buildup of salt layers on the lakebed has puzzled scientists because it doesn't make sense according to the laws of physics. Now, a new study in AGU's journal Water Resources Research proposes that tiny disturbances in the lake, caused by waves or other motion, create "salt fingers" that slowly funnel salt down to the lakebed. Watch a video about this research here.

"Initially you form these tiny fingers that are too small to observe... but quickly they interact with each other as they move down, and form larger and larger structures," said Raphael Ouillon, a mechanical engineer at the University of California Santa Barbara and lead author of the new study.

"The initial fingers might only be a few millimeters or a couple of centimeters thick, but they're everywhere across the entire surface of the lake," said Eckart Meiburg, also a mechanical engineer at UC Santa Barbara and co-author of the new study. "Together these small fingers generate a tremendous amount of salt flux."

"Altogether this makes the Dead Sea a unique system," said Nadav Lensky, a geologist with the Geological Survey of Israel and co-author of the new study. "Basically, we have here a new finding that we think is very relevant to the understanding of the arrangement of these basins that were so common in Earth's history."

As the Dead Sea has become saltier in recent decades, much of that salt has become concentrated near its surface. During the summer, extra heat from the Sun warms the surface of the Dead Sea and divides it into two distinct layers: A warm top layer sitting atop a colder lower layer. As water evaporates from the top layer in the summer heat, it becomes saltier than the cooler layer below.

Researchers realized the salt snow they observed was originating in this top salty layer, but this warm water doesn't mix with the cooler water below because it's so much warmer and less dense. So they were puzzled as to how salt from the surface was entering the cooler layer and plummeting to the bottom of the lake.

Lensky and his colleagues proposed an explanation in 2016, and the new research tests this theory for the first time.

They propose that when the top layer of the lake is disturbed by waves or other motion, tiny parcels of warm water enter the cooler pool of water below. Heat diffuses more rapidly than salt, so this warm water parcel rapidly cools. But as it cools it holds less salt, so the salt precipitates out and forms crystals that sink to the bottom. Watch an animation of the salt fingers here.

In the new study, researchers created a computer simulation of how water and salt would flow in the Dead Sea if the salt fingers theory was correct. They found the salt fingers theory correctly predicted the downward flow of salt snow and buildup of salt layers in the middle of the lake's floor. Because the level of the lake is declining, due to pumping of freshwater from the nearby Jordan River, the salt layers are concentrated in the central part of the lake, according to the authors.

"We know that many places around the world have thick salt deposits in the Earth's crust, and these deposits can be up to a kilometer thick," Meiburg said. "But we're uncertain how these salt deposits were generated throughout geological history."

One notable example is the thick salt layer underneath the Mediterranean Sea. Researchers know that about six million years ago, the Strait of Gibraltar closed off, because of the movements of Earth's tectonic plates. This cut off the supply of water from the Atlantic Ocean to the Mediterranean, creating a giant shallow inland sea.

After several hundred thousand years, the Mediterranean's water levels dropped so much that the sea partly or nearly dried out, leaving behind thick deposits of salt. The new finding suggests these deposits formed during this time in a similar manner to what is happening right now in the Dead Sea. When the Strait of Gibraltar opened up again, water flooded the basin and the salt deposits were buried under new layers of sediment, where they remain today.

Founded in 1919, AGU is a not-for-profit scientific society dedicated to advancing Earth and space science for the benefit of humanity. We support 60,000 members, who reside in 135 countries, as well as our broader community, through high-quality scholarly publications, dynamic meetings, our dedication to science policy and science communications, and our commitment to building a diverse and inclusive workforce, as well as many other innovative programs. AGU is home to the award-winning news publication Eos, the Thriving Earth Exchange, where scientists and community leaders work together to tackle local issues, and a headquarters building that represents Washington, D.C.'s first net zero energy commercial renovation. We are celebrating our Centennial in 2019. #AGU100

Caption: An aerial view of the Dead Sea taken by the Hubble Space Telescope. New research explains why salt crystals are piling up on the deepest parts of the Dead Sea's floor, a finding that could help scientists understand how large salt deposits formed in Earth's geologic past.

Caption: Researchers walk along the bank of the Dead Sea, one of Earth's saltiest bodies of water. It is nearly ten times saltier than the ocean.