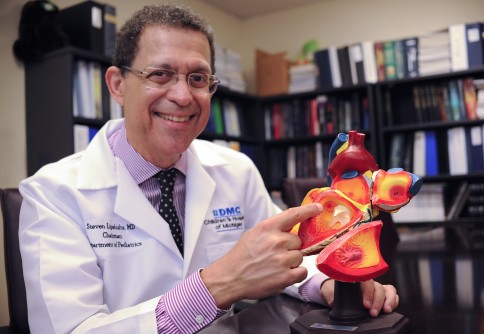 Newswise — DETROIT, Mich., Thursday, March 17, 2016 – A newly published national study by the Children’s Hospital of Michigan and Wayne State University School of Medicine researchers shows that “parental impact and family functioning” become increasingly abnormal when children with cardiomyopathy-related chronic heart disease are more severely ill than children less affected by the disease. The findings, published in the March 2016 issue of the Journal of Pediatrics, appear to suggest that “chronic heart disease [caused by cardiomyopathy] is in many ways a family disease,” and that finding ways to include the entire family in the affected child’s treatment might be a more effective approach for many pediatric heart disease survivors.

The study raises important questions for patients and pediatric cardiologists alike – and could eventually play a role in expanding the standard of care for patients who survive early cardiomyopathy-related heart failure, said the researchers.

“This study shows that the parental impact and family functioning [became] highly abnormal the sicker a child was,” said Children’s Hospital of Michigan Pediatrician-in-Chief and Chair of the Wayne State University School of Medicine Department of Pediatrics Steven E. Lipshultz, M.D., senior author and principal investigator of the study. “Further, this study showed that the more abnormal these functional status and quality of life parameters were, the less likely the child was to have a good outcome.

“These findings suggested that using these parameters to assess patients during regular visits may identify high-risk children and families,” he added. “But they also show we don’t follow a patient’s family as a ‘chronic-illness family’ in a family-based care model – and a good next step may be to see if doing that is helpful.”

The study was based in part on a review of more than 300 questionnaires completed by the parents of cardiomyopathy-linked chronic heart disease survivors. “The data we gathered clearly suggest that the level of functioning and the quality of life of these patients are associated with the severity of their illness and whether they will ultimately fail medical management of their cardiomyopathy,” Dr. Lipshultz said. “Since families who felt worse were significantly more likely to have children who needed a heart transplant or who died, this may mean that how the family reacts to this illness could be important.”

“Throughout the U.S. we currently do not routinely quantitatively assess serially how families of children with cardiomyopathy are emotionally responding to what their children are going through. However, based on the findings of this study this should become the new global standard of clinical care since the early identification of families with functional impairment allows for the provision of specialized services early in the course of these diseases,” Dr. Lipshultz explained.

But he was also careful to point out that a treatment model that includes assessment of and assistance to a patient’s family still needs to be directly studied to gauge its potential effectiveness.

The study also documented a clear association between negative health outcomes of childhood cardiomyopathy survivors and “impaired health-related quality of life and functional status” and suggested measuring the impact of the survivors’ chronic illnesses on their families might be helpful in improving long-term outcomes.

After describing the “excitement and encouragement that have flowed from the early, online publication of the team’s study in the world’s most often-cited pediatric journal,” Dr. Lipshultz went on to point out that its findings “strongly suggest the potential value of a comprehensive, broad-based [clinical] approach to caring for survivors of childhood cardiomyopathy.

“As the study implies, this is a disease which often has a large effect on family functioning,” he said. “But when you ask, do we have a program of chronic-illness management in place for these kids, the answer all too often is: absolutely not.”

Dr. Lipshultz also noted that “until now, nobody has appreciated the impact that this chronic illness has on families, and this study shows that patients might benefit significantly from family-linked treatment that would include comprehensive medical management and a ‘medical home’ for the entire family that could include a cardiologist, a nurse practitioner, a social worker, a nutritionist and perhaps a psychologist.

“All too frequently, pediatric patients wind up visiting their cardiologist for only short periods of time, and the result, perhaps, is that their medications may be adjusted a little and then they’re sent on their way,” he added. “But the study seems to suggest that this fragmented approach to caring for these chronically ill patients simply isn’t good enough.”

The Children’s Hospital of Michigan is participating in a project focused on improved access and reduced costs for chronic, frequent users of children’s hospital services. These goals are achieved through a patient-centered medical home that promotes ongoing team- and self-management of complex chronic diseases. The onsite multidisciplinary team-based care model includes medical as well as behavioral, social work, pharmacy and dietary professionals. This approach may improve care and reduce the costs of treating urban children with chronic illnesses.

Supported by the National Heart, Lung, and Blood Institute (NHLBI; R01 HL HL53392). The contents of this publication are solely the responsibility of the authors and do not necessarily represent the official views of the NHLBI. The authors declare no conflicts of interest.