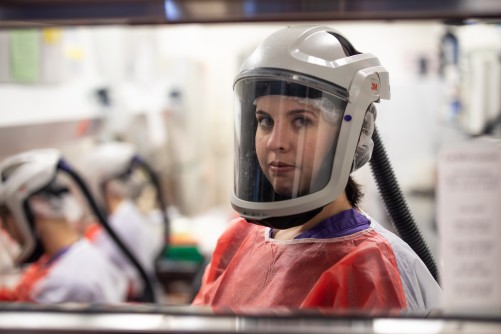 To work with Rift Valley fever virus, Cynthia McMillen, Ph.D., has to wear full body protective gear, including a respirator. 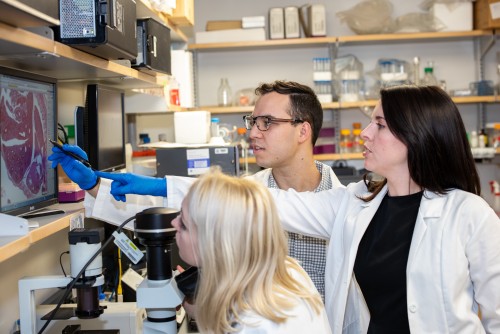 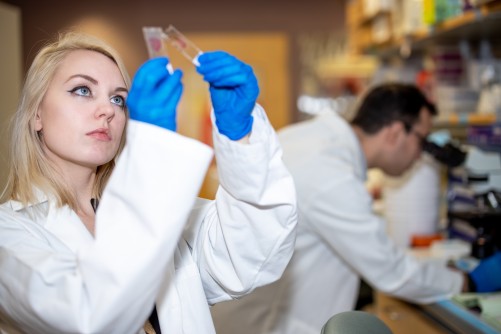 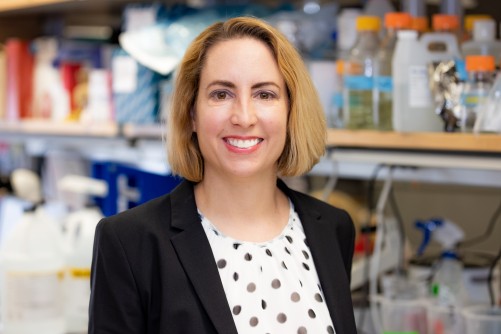 Assistant Professor at the University of Pittsburgh Center for Vaccine Research, Principal Investigator and senior author of this study. 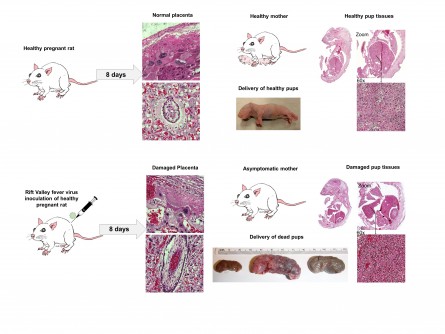 Visual Abstract Summarizing the Main Findings of the Paper 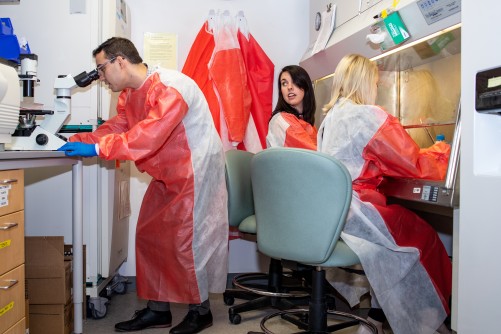 Cynthia McMillen and Devin Boyles work with cultured cells in the fume hood, while Joseph Albe examines them under the microscope.

To work with Rift Valley fever virus, Cynthia McMillen, Ph.D., has to wear full body protective gear, including a respirator.

Assistant Professor at the University of Pittsburgh Center for Vaccine Research, Principal Investigator and senior author of this study.

Visual Abstract Summarizing the Main Findings of the Paper

Cynthia McMillen and Devin Boyles work with cultured cells in the fume hood, while Joseph Albe examines them under the microscope.

Newswise — PITTSBURGH, Dec. 5, 2018 – Like Zika, infection with Rift Valley fever virus can go unnoticed during pregnancy, all the while doing irreparable – often lethal – harm to the fetus. The results of a new study, led by researchers at the University of Pittsburgh Center for Vaccine Research (CVR), underscore the importance of disease prevention for pregnant women and set the stage for vaccine development.

In a paper published today in Science Advances, the researchers show that, in pregnant rats with no outward signs of disease, Rift Valley fever virus is vertically transmitted from mother to child through the placenta, resulting in high rates of stillbirth. Similar results were seen in human tissue.

“I think it’s such a big step forward for the field,” said lead author Amy Hartman, Ph.D., assistant professor of infectious diseases and microbiology in Pitt’s Graduate School of Public Health, and member of Pitt’s CVR. “Now we have a way to study in the lab how the virus is transmitted from mother to fetus, with the very important goal of figuring out how to prevent that.”

Although Rift Valley fever has been reported only in Africa and the Middle East, the mosquito that transmits the virus also ranges from Europe to the Americas. The World Health Organization considers Rift Valley fever a potential public health emergency.

Epidemiology in human pregnancy is scant, but among herds of livestock, Rift Valley fever outbreaks lead to an “abortion storm,” resulting in widespread miscarriage and stillbirth affecting 90 to 100 percent of pregnant animals.

This new study by Hartman and colleagues establishes for the first time a laboratory-friendly rodent model of the virus’ hallmark gestational consequences.

“Our model is similar to what is seen in livestock,” said first author Cynthia McMillen, Ph.D., a postdoctoral researcher in Hartman’s lab. “The adults may have little or no disease symptoms, but still have significant damage to the placenta and their offspring. This observed pathology and vertical transmission of the virus can explain how Rift Valley fever virus infection leads to fetal demise.”

Overall, 65 percent of the pups born of infected rats died, compared to 25 percent of pups born of uninfected controls. All of the infected mothers lost at least one pup, and all of their offspring – living and dead – contracted the virus. The placentas of these animals harbored more virus than any other tissue in the body.

Because the placenta is different among species, it was important to see whether human placenta has the same susceptibility to Rift Valley fever virus infection. So McMillen and colleagues enlisted the help of Carolyn Coyne, Ph.D., professor of pediatrics at UPMC Children’s Hospital of Pittsburgh and a leading expert on viral infections of the placenta. Using human placenta tissue, the research team found that Rift Valley fever virus is even better at evading the mother-child barrier than other vertically transmitted viruses, like Zika.

“Zika has to take smaller ‘side roads’ through the placenta, and it’s a less efficient process. That’s why not all women who contract Zika go on to have babies with congenital defects,” said Coyne, who was a coauthor on the study. “But Rift Valley fever virus has mechanisms that overcome the placenta’s antiviral strategies. It takes ‘the expressway’ to get into the placenta fastest and easiest. Rift Valley fever is more pathogenic in fetal tissue than Zika ever has been.”

Having these laboratory models in place, the researchers aim to develop vaccines that could prevent Rift Valley fever virus from realizing its potential as a public health emergency.

“With Zika, the virus emerged and then the medical and scientific community realized it caused birth defects in developing babies,” Hartman said. “What we want to do with Rift Valley fever is to understand how the virus causes miscarriage and birth defects prior to it spreading throughout large areas of the world.”

Additional authors on the study include Devin Boyles, M.S., and Joseph Albe, M.P.H., of Pitt; Nitin Arora, M.D., of the University of Alabama at Birmingham; Michael Kujawa of the Children’s National Medical Center; and Jeffrey Bonadio, M.D., of UPMC Magee-Womens Hospital.

For additional high-resolution images, contact Erin Hare at HareE@upmc.edu or 412-864-7194.