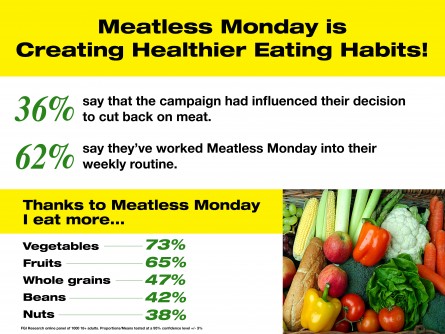 Meatless Monday One day a week, cut out meat

Newswise — NEW YORK -- On October 6th, over 8,000 people will gather in Philadelphia for the Academy of Nutrition and Dietetics’ 2012 Food & Nutrition Conference (FNCE). The hot topic is how dietitians and nutritional professionals can shift Americans away from a diet high in saturated fat, sugar and processed foods to a more balanced diet of lean proteins, vegetables and whole grains called for in the MyPlate guidelines.

The Monday Campaigns and Johns Hopkins Center for a Livable Future announced the results of a national survey that suggest how Meatless Monday can be an effective tool to meet this challenge. An online survey conducted by FGI Research found that Meatless Monday not only influences people to reduce meat intake, but encourages them to incorporate healthier alternatives into their weekly routine.

The survey found that over one-third of people (36 percent) aware of Meatless Monday said that the campaign has influenced their decision to cut back or to consider cutting back on meat. Overall, this group reported improvements in consumption of a range of healthy foods, with 73 percent saying they eat more vegetables, 64 percent eating more fruits, 42 percent eating more beans and 47 percent eating more whole grains.

“We started out with the simple goal of cutting back on meat and saturated fat and along the way found that Meatless Monday had become a way to get lots of delicious meatless alternatives on America’s plates”, says Sid Lerner, chairman and founder of The Monday Campaigns. “Meatless Monday gives chefs and home cooks a weekly opportunity to think creatively about what to cook instead of meat.”

Nutrition professionals can easily take advantage of Meatless Monday’s simple message. “In a clinical setting, dietitians can counsel patients on the benefits of eating weekly meatless meals and even send out pre-Monday reminders via e-newsletter or social media,” says Allison Righter, MSPH, RD with the Center for a Livable Future. “Dietitians working in food service, with community organizations, in education or research, or in a private practice can all adapt the campaign in their own way – through creating interactive and informational displays, developing and promoting healthy meatless options, leading cooking classes, or organizing consumer contests.”

For more on Meatless Monday and how the campaign can be used to promote a well-balanced diet, guests at FNCE can visit booth 1241. Information and delicious, healthy recipes are also available at meatlessmonday.com

The Monday Campaigns is a non-profit initiative that uses weekly prompts and the unique cultural associations of Monday as the beginning of the week to positively affect a range of healthy behaviors, including eating healthy, exercising, and quitting smoking.

Meatless Monday, founded in 2003 in association with the Johns Hopkins Bloomberg School of Public Health, encourages people to reduce meat consumption by 15% (one day a week) to benefit their personal health and the health of the environment.

The Center for a Livable Future(CLF) at the Johns Hopkins Bloomberg School of Public Health provides scientific expertise and technical assistance to the Meatless Monday campaign. For this survey, CLF served as an advisor in developing the questions and analyzing the results.

FGI Research is a leading provider of custom market research, panels and surveys and data collection. This online survey was administered in July 2012 to a nationally representative sample of 1,005 U.S. adults ages 18 and over. The margin of error is 3%.