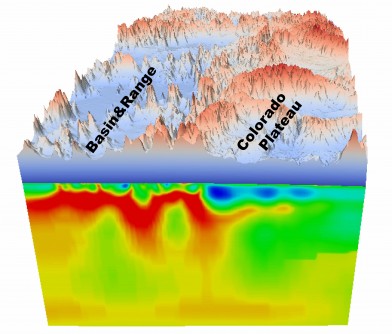 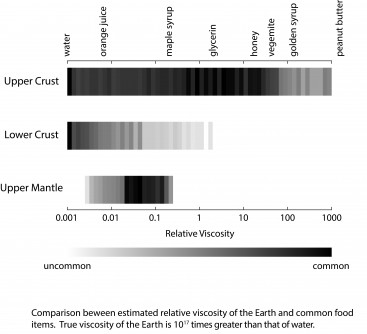 Comparison between relative viscosity of the Earth and common food items.

Newswise — Scientists have developed a method to estimate weakness in the Earth’s outer layers which will help explain and predict volcanic activity and earthquakes.

Published in the journal Science today, the research describes a new model of the Earth’s movement in the upper crust through to upper mantle (400km below the surface), allowing predictions at a much smaller scale than previously possible.

The research is a collaboration between researchers at the University of Illinois in the US and University of Adelaide in Australia.

“Producing realistic models of these movements has been difficult because the small scale variations in viscosity are often poorly known,” says co-author Dr Derrick Hasterok, from the University of Adelaide’s School of Physical Sciences.

“In essence, we’ve developed a method to estimate small scale (between one and 10 kilometer) variations of viscosity within the upper 400 km of the Earth’s crust using surface-based electromagnetic imaging techniques.”

The resulting model allows the dramatic improvement of flow models which can be used to make predictions about the forces driving tectonic plate deformation and sources of potential seismic and volcanic activity.

The method they have developed uses an electromagnetic imaging technique called magnetotellurics to estimate the electrical conductivity beneath the Earth's surface.

“The same factors which affect electrical conductivity ─ temperature, water content, and the presence of molten material (magma) ─ also affect the viscosity or strength. The hotter, wetter or more molten, the weaker the structure,” says lead author Dr Lijun Liu, from the University of Illinois.

“We’ve been able to look at processes operating beneath the Earth’s surface at a much smaller scale than previous geodynamic modelling.”

The researchers used data from a magnetotelluric survery of western United States to show their model works. Currently there is a continent-wide project mapping the Australian upper mantle using the same electromagnetic technique, and the researchers believe applying this data to their new model will bring improved understanding of volcanic and earthquake activity along the southeastern and eastern coast of Australia.