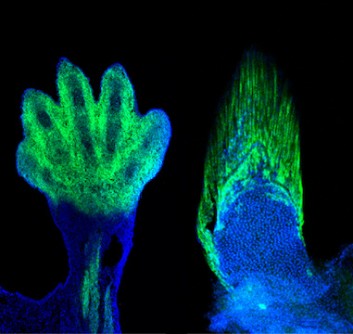 Markers of the wrists and digits in the limb of a mouse (left) are present in fish and demarcate the fin rays (right). The wrist and digits of tetrapods are the cellular and genetic equivalents of the fin rays of fish. 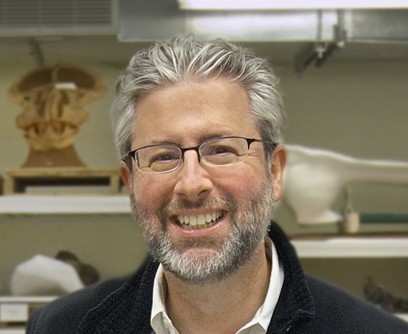 Neil Shubin, PhD, the Robert R. Bensley Distinguished Service Professor of Organismal Biology and Anatomy at the University of Chicago

Newswise — One of the great transformations required for the descendants of fish to become creatures that could walk on land was the replacement of long, elegant fin rays by fingers and toes. In the Aug. 18, 2016, issue of Nature, scientists from the University of Chicago show that the same cells that make fin rays in fish play a central role in forming the fingers and toes of four-legged creatures.

After three years of painstaking experiments using novel gene-editing techniques and sensitive fate mapping to label and track developing cells in fish, the researchers describe how the small flexible bones found at the ends of fins are related to fingers and toes, which are more suitable for life on land. “When I first saw these results you could have knocked me over with a feather,” said the study’s senior author, Neil Shubin, PhD, the Robert R. Bensley Distinguished Service Professor of Organismal Biology and Anatomy at the University of Chicago. Shubin is an authority on the transition from fins to limbs.

“For years,” he said, “scientists have thought that fin rays were completely unrelated to fingers and toes, utterly dissimilar because one kind of bone is initially formed out of cartilage and the other is formed in simple connective tissue. Our results change that whole idea. We now have a lot of things to rethink.”

To unravel how fins might have transformed into wrists and fingers, the researchers worked mostly with a standard fish model: the zebrafish.

Tetsuya Nakamura, PhD, a postdoctoral scholar in Shubin’s lab, used a gene-editing technique, CRISPR/Cas, in zebrafish to delete important genes linked to limb-building, and then selectively bred zebrafish with multiple targeted deletions. He spent more than two years building and cross breeding the fish mutants, a project that began at the Marine Biological Laboratories in Woods Hole, Massachusetts.

At the same time, Andrew Gehrke, PhD, a former graduate student in Shubin’s lab, refined cell-labelling techniques to map out when and where specific embryonic cells migrated as the animals grew and developed.

“It was one of those eureka moments,” Gehrke said. “We found that the cells that mark the wrists and fingers of mice and people were exclusively in the fin rays of fish.”

The team focused on Hox genes, which control the body plan of a growing embryo along the head-to-tail, or shoulder-to-fingertip, axis. Many of these genes are crucial for limb development.

They studied the development of cells, beginning, in some experiments, soon after fertilization, and followed them as they became part of an adult fin. Previous work has shown that when Hox genes, specifically those related to the wrists and digits of mice (HoxD and HoxA), were deleted, the mice did not develop those structures. When Nakamura deleted those same genes in zebrafish, the long fins rays were greatly reduced.

“What matters is not what happens when you knock out a single gene but when you do it in combination,” Nakamura explained. “That’s where the magic happens.”

The researchers also used a high-energy CT scanner to see the minute structures within the adult zebrafish fin. These can be invisible, even to most traditional microscopes. The scans revealed that fish lacking certain genes lost fin rays, but the small bones made of cartilage fin increased in number. The authors suspect that the mutants that Nakamura made caused cells to stop migrating from the base of the fin to their usual position near the tip. This inability to migrate meant that there were fewer cells to make fin rays, leaving more cells at the fin base to produce cartilage elements.

“It really took the combination of labeling and knockouts to convince us that this cellular relationship between fins and limbs was real,” Gehrke said.

Future research includes new expeditions to find more fossil intermediates – such as Tiktaalik, a link between primitive fish and the first four-legged animals, discovered by Shubin and colleagues in 2006 – in the transition from fins to limbs. They are also planning experiments with Hox genes to learn how a common population of cells can form such different structures in fish and people. 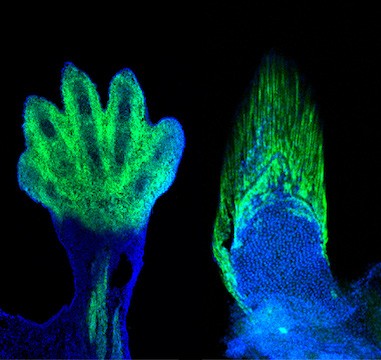 Caption: Markers of the wrists and digits in the limb of a mouse (left) are present in fish and demarcate the fin rays (right). The wrist and digits of tetrapods are the cellular and genetic equivalents of the fin rays of fish. 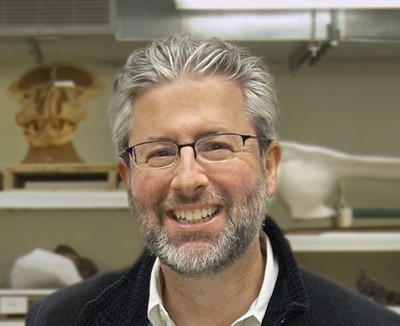