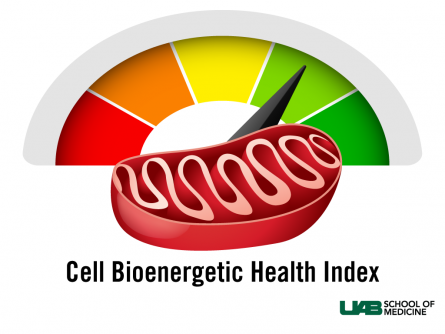 Newswise — BIRMINGHAM, Ala. – Researchers at the University of Alabama at Birmingham School of Medicine have created an experimental blood test that, for the first time, determines a “Bioenergetic Health Index,” or BHI, by gauging the performance of mitochondria, the cell’s energy powerhouses. They report their laboratory findings in a recent issue of the journal Clinical Science.

Until now, a test of mitochondrial health has been elusive, experts say; but it could prove to be a significant early warning system for people with chronic diseases known to damage the mitochondria, such as HIV, alcoholic hepatitis, age-related diseases and more.

“Over the past few years it has become clear that mitochondrial dysfunction is central to a wide range of important human diseases, ranging from diabetes, obesity and the metabolic syndrome to inflammatory and neurodegenerative diseases,” said Mike Murphy, Ph.D., group leader at the Medical Research Council’s Mitochondrial Biology Unit in Cambridge, United Kingdom, who was not an author on the study.

“In clinical settings, patients’ BHI could be measured to determine their bioenergetic health baseline before they undergo different procedures,” said Victor Darley-Usmar, Ph.D., a professor of pathology, director of the Mitochondrial Medicine Laboratory at UAB and lead author of the study.

BHI gauges mitochondria function by measuring oxygen consumption, which can be used as a measure of energy production, in peripheral blood cells. The concept is that as BHI declines it acts as a biomarker of the patient’s overall ability to provide sufficient energy to fight disease.

“Assessing the function of mitochondria in patients has the potential to be an early indicator of bioenergetics impairment, leading to earlier diagnosis, contributing to prognosis and helping to suggest appropriate treatments. However, routine testing has not been feasible due to a lack of instrumentation and assay standardization. Therefore, the development of simple and widely applicable methods to assess mitochondrial function, such as a Bioenergetic Health Index in blood samples, is a significant breakthrough,” Murphy said.

Russell Swerdlow, M.D., director of the University of Kansas Alzheimer’s Disease Center and the Neurodegenerative Disorders Program, said, “The search for a valid, comprehensive, accurate predictor of overall human health has been somewhat like the search for the Holy Grail. With this current piece of work, the UAB group shoots to the head of the pack.”

Swerdlow also was not an author of the paper.

“BHI is an especially important and timely measure that meets a large and growing unmet need because of the obesity epidemic in America,” Darley-Usmar said. “Obesity, and some of the medications used to treat it, can damage mitochondria, thereby reducing a person’s ability to combat the stress of disease.”

The biology of changing energetics and its role in disease has long been recognized; but it is not well-quantified and feasible, due in part to technological limitations in measuring mitochondrial function in small numbers of cells. “Previously it would take several million cells to accurately measure oxygen consumption, and this was not available from the typical clinical blood draw,” he said.

The UAB Mitochondrial Medicine Laboratory measured mitochondrial function in a simple blood sample using new technology by Seahorse Bioscience, which also participated in the study; Darley-Usmar is a member of the company’s scientific advisory board.

“Now that instruments are much more sensitive and standardized, we have been able to routinely generate BHI values from patient blood draws in a clinical setting,” said Darley-Usmar. “Now the question is, how do we use this in a way that is clinically relevant?”

The BHI could play a significant role in personalized medicine, the concept of tailoring medical interventions to individual patients based on patients’ genetic makeup and factors that influence their BHI, such as diet, exercise and environmental exposures.

Combining BHI with genomic and other genetic and cellular indicators could produce a personalized medicine profile, Darley-Usmar says. For instance, in patients with diabetes, a low BHI could signal an increased risk of kidney damage even if other clinical indicators are only slightly elevated. Armed with the patient’s BHI, a physician could modify treatment to decrease risk of kidney failure.

There are also specific implications for BHI in aging research, Swerdlow says.

“For decades now, mitochondria have been suspected to play a role in, as well as implicated in, aging,” Swerdlow said. “I don’t think this line of thinking is really that controversial at this point. Currently, we are also appreciating more and more the importance of mitochondria in a variety of diseases. This includes an expanding list of common diseases and conditions we classically would not have considered to be influenced by mitochondria.

“Overall, emerging research suggests mitochondria and bioenergetic function may represent a crucial link between aging and age-related diseases. I think, therefore, that in developing a mitochondrial biomarker-based approach to assessing health, as they do with their BHI assessment, Dr. Darley-Usmar and colleagues are spot-on.”

“The concept is in its early stages, and clinical trials are currently underway to determine how BHI changes with health and disease in individual patients,” Darley-Usmar said.

“It will be very interesting to see the outcome of applying the BHI approach to patient studies over the next few years and also to see how this seminal work accelerates the development of ever-improving ways of finding out how well our mitochondria are working,” Murphy said.