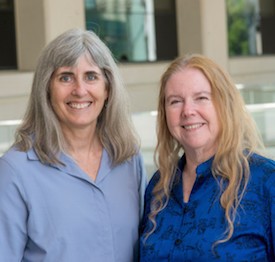 Newswise — DALLAS – July 21, 2016 ¬– UT Southwestern Medical Center researchers have identified a protein termed ASCL1 that is essential to the development of small cell lung cancer and that, when deleted in the lungs of mice, prevents the cancer from forming.

The new findings identify ASCL1 as an important therapeutic target for small cell lung cancer, for which there have been few changes in treatment for the past 30 years.

“Small cell lung cancer is a devastating disease that is diagnosed in 30,000 people a year in the U.S. and accounts for roughly 15 percent of lung cancer cases. Most patients survive one year or less and therapy has not changed significantly in 30 years. Our work shows the possibility of developing entirely new types of targeted therapies for small cell lung cancer by focusing on ASCL1,” said Dr. John D. Minna, Professor and Director of the Hamon Center for Therapeutic Oncology Research, and Director of the W.A. “Tex” and Deborah Moncrief Jr. Center for Cancer Genetics. He is Professor of Internal Medicine and Pharmacology, co-directs the Experimental Therapeutics of Cancer Program at the Simmons Cancer Center, and holds the Max L. Thomas Distinguished Chair in Molecular Pulmonary Oncology, and the Sarah M. and Charles E. Seay Distinguished Chair in Cancer Research.

Signs and symptoms of small cell lung cancer include coughing, shortness of breath, and chest pain, and the rapid development of widely spread disease around the patient’s body. Smoking is the major risk factor for small cell lung cancer according to the National Cancer Institute, which helped fund the study along with the Cancer Prevention and Research Institute of Texas. The team of researchers, which included Dr. Melanie H. Cobb, Interim Director of the Simmons Cancer Center and Professor of Pharmacology, determined that the ASCL1 protein found in most small cell lung cancer tumors is required for formation of the disease. When researchers deleted ASCL1 in the lungs of mice genetically engineered to develop small cell lung cancer, this loss prevented development of the cancer. Additionally, researchers were able to differentiate between the tumor-promoting function of ASCL1 and a related protein, NEUROD1, in small cell lung cancer. Some small cell lung cancers expressed ASCL1 whereas others expressed NEUROD1, and although the two genes regulate different processes in the cells, both appear to control genes that are important in driving this cancer. Dr. Johnson, holder of the Shirley and William S. McIntyre Distinguished Chair in Neuroscience, has been studying the roles of ASCL1 in the developing nervous system for many years , and was able to identify new roles for the protein in small cell lung cancer using UT Southwestern’s Genomics and Microarray Core facility, which provides cutting-edge molecular technologies and services to hundreds of investigators pursuing different research projects.

About UT Southwestern Medical CenterUT Southwestern, one of the premier academic medical centers in the nation, integrates pioneering biomedical research with exceptional clinical care and education. The institution’s faculty includes many distinguished members, including six who have been awarded Nobel Prizes since 1985. The faculty of almost 2,800 is responsible for groundbreaking medical advances and is committed to translating science-driven research quickly to new clinical treatments. UT Southwestern physicians provide medical care in about 80 specialties to more than 100,000 hospitalized patients and oversee approximately 2.2 million outpatient visits a year.###