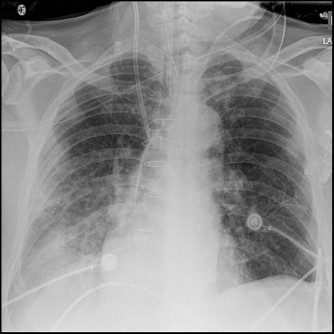 Newswise — A new prediction tool can help doctors better identify patients who are at highest risk for respiratory failure after surgery and therefore prevent the often deadly condition, suggest data from a large multi-center study published in the May issue of Anesthesiology.

Affecting nearly 200,000 Americans a year, acute respiratory distress syndrome (ARDS) is a sudden failure of the lungs caused by a number of issues ranging from smoke inhalation to pneumonia or blood infection. High-risk patients can develop ARDS after surgery. ARDS is difficult to treat once it develops and is fatal about 30 percent of the time.

Doctors may be able to take measures during surgery to prevent the condition, such as using blood products conservatively, restricting the volume of fluids administered and using different methods to ventilate the lungs. However, only about 3 percent of patients considered at risk actually develop ARDS and testing preventative measures is costly, time-consuming and may be less than ideal for patients not at high risk. Therefore, researchers in this study focused on identifying patients most likely to develop ARDS after surgery.

“It’s certainly true in this case that an ounce of prevention is worth a pound of cure,” said Daryl J. Kor, M.D., lead author of the study and associate professor of anesthesiology at Mayo Clinic, Rochester, Minn. “But our ability to predict who is at risk has been limited. By identifying those who are at highest risk with better accuracy, we can begin to take steps toward preventing this dangerous and costly surgical complication.”

The prediction tool could help doctors assign risk levels to patients by determining if they have one or more of nine predictors identified as most associated with the development of ARDS: blood infection (sepsis), liver disease, high-risk surgery on the heart or aorta (the body’s largest blood vessel), emergency surgery, admission from a location other than home (such as a nursing home or other hospital), an increased respiratory rate, and two measures that show the patient has lower-than-normal oxygen levels in the blood. The more factors that apply to the patient, the greater the risk of developing ARDS, and the more important it is to use preventive measures, Dr. Kor said.

In the study, researchers performed a secondary analysis of data from a trial at 22 medical centers, identifying 1,562 patients who prior to surgery were considered at risk for ARDS – for example, those who had a blood infection or pneumonia. Of those, 117 (7.5 percent) actually developed ARDS. Based on their findings, researchers revised an existing prediction tool (used for ARDS prediction in a patients undergoing elective surgery) so it was far more effective at identifying patients who were at greatest risk for ARDS after a wide variety of surgical procedures.

“Previous efforts have largely focused on treating ARDS well after it’s onset,” said Dr. Kor. “There has not been a lot of success with that strategy. If the new prediction tool is validated by other studies, it could be used as a screening mechanism to identify patients at greatest risk for ARDS, thereby facilitating it’s prevention as well as associated complications and death.”

For more information on the field of anesthesiology, visit the American Society of Anesthesiologists online at asahq.org. To learn more about the role physician anesthesiologists play in ensuring patient safety, visit asahq.org/WhenSecondsCount. Join the social conversation today. Like ASA on Facebook, follow ASALifeline on Twitter.