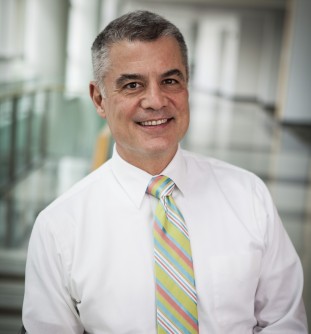 Petros Levounis is professor and chair of the Department of Psychiatry at Rutgers New Jersey Medical School and a member of the board of directors at the American Society of Addiction Medicine.

Newswise — Every day, 91 Americans die from an opioid overdose, according to the Centers for Disease Control and Prevention. Nationwide, physicians and legislators are ramping up efforts to stem the escalating heroin and prescription opioid addiction crisis. Gov. Chris Christie recently signed a bill requiring insurance companies to cover up to six months of inpatient and outpatient treatment for drug addiction and limit an opioid prescription to a five-day supply to strengthen efforts to prevent drugs from reaching children and other vulnerable populations.

Treatment methods, however, vary in efficacy – complicating the efforts of people with opioid use disorder to sustain recovery. Rutgers Today spoke to Petros Levounis, professor and chair of the Department of Psychiatry at Rutgers New Jersey Medical School and a member of the board of directors at the American Society of Addiction Medicine, about recent advancements in opioid treatment delivery methods and the most effective combination of therapies for recovery.

Where do we stand on new delivery methods of opioid addiction medication for improving recovery rates?Levounis: Traditionally, there were two main pharmacological approaches. We would prescribe agonist medications, like methadone, which activates the opioid system in a way similar to heroin or prescription opioids and allows the person to feel normal while reducing withdrawal symptoms. The other approach is an antagonist medication like naltrexone, which blocks the opioid systems and helps people to manage their addiction by stopping them from feeling high if they take a problem drug.

Over the past several years, we have developed a third strategy, a partial agonist – buprenorphine – which combines the two approaches to help people reduce their dependence and curb withdrawal symptoms. The downside is that patients must take the medication – typically a tablet or a film placed under the tongue – every day. If they forget, they are at risk for withdrawal and relapse.

In an exciting development, the FDA recently approved buprenorphine implants, which provide long-term maintenance. This is the first time an implant has been approved for the treatment of opioid addiction in the U.S. In this outpatient procedure, a small incision is made underneath the inner upper arm for four one-inch implants, providing a constant low-level dose of buprenorphine. After six months, the doctor assesses if another six-month dose is necessary.

Eligible patients are those who are already stable on low-to-moderate doses of other forms of buprenorphine. As doctors undergo training in the procedure, it is becoming more available. I expect this treatment method will be accessible to our patients by this summer.

What other improvements of delivery are on the horizon?Levounis: Buprenorphine injections, which will be effective for two weeks to a month, are in clinical trial, but have not yet been approved by the FDA.

What medical challenges do these advances in delivery resolve?Levounis: Patient adherence to a pharmacological regimen is crucial to success – but it is the most challenging for practitioners to uphold. When patients are ill, they readily accept medications. However, when they start to feel healthy, their inclination is to stop taking the medication. The implants allow the medication to do its job without people thinking about it, which substantially reduces the risk of relapse.

What is the most effective course of treatment for opioid use disorder? Levounis: Scientific evidence shows that a maintenance approach with medications used in combination with behavioral treatment and recovery support are more effective than detoxification programs aimed at abstinence. In fact, a vast majority of people who go through a detoxification program without continuing on with pharmacological treatment end up relapsing.

Going through detox only can be dangerous. What few people understand is that during detoxification the patient’s tolerance level to the opioids is reset. For example, heroin addicts know the exact dose they need to take each day to keep themselves from withdrawing or overdosing. If they go through detox, do not continue on with treatment and relapse, they likely will return to taking the same amount of heroin as before. However, because they have lost tolerance, that dose is now lethal.