Findings Are a Step Toward Longer-Lasting Vaccines 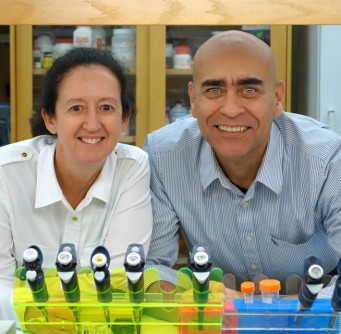 Courtesy of The Scripps Research Institute.

Newswise — LA JOLLA, CA – February 2, 2015 – The last time you were in the doctor’s office for a vaccine booster shot, did you wonder why you needed one? Exactly how booster shots offer long-term protection from viruses has long been a mystery to scientists.

Now, a new study from scientists at The Scripps Research Institute (TSRI) helps explain how booster shots prompt immune “memory” to improve, an important step toward the development of more effective, longer-lasting vaccines. The findings were published online ahead of print on February 2 in the journal Nature Immunology.

"We can now see the evolution of better protection in single memory cells as they respond to the boost,” said TSRI Professor Michael McHeyzer-Williams, senior author of the new study.

When a virus attacks the body, the immune system’s B cells produce antibodies to bind to and disable the current invader. At the same time, a squadron of memory B cells heads to special areas of the lymph nodes. These memory B cells will be trained to recognize even tiny amounts of the virus if it ever attacks again.

Once memory B cells arrive in the germinal centers of the lymph nodes, they are cloned, and each clone receives a random mutation to its B cell receptor (a protein that interacts with viruses). Although some of the mutations are useless, others lead to even more effective antibodies.

Each mutated memory B cell is then tested against a part of the virus. If its antibodies pass the test and bind even better to the virus, the B cell will eventually be released into the body to patrol for invaders. Memory B cells can go through the same process to train against bacteria, fungi and other pathogens.

Scientists have long known that memory B cells produce more effective antibodies each time they encounter a virus—that’s why most vaccines require “booster” shots. But until now, scientists didn’t know all the stages of training that take place in the lymph nodes.

“You develop memory so that the next time you see it, you clear the infection more quickly,” explained McHeyzer-Williams. “But the cellular and molecular details of memory are not well understood.”

In the new study, the researchers injected mouse models with a substance (“antigen”) to prompt an immune response. Using a technique called flow cytometry, they collected single memory B cells four and eight days after injecting an antigen boost.

After collecting about 700 individual memory B cells from germinal centers, the team directly associated the proteins expressed, sequenced the genes from the individual B cell receptors and measured 96 other genes from each single memory B cell. This approach provides a more complete picture of memory B cell evolution than previously possible.

The researchers demonstrated a wide range of mutations in responding memory B cells, showing that the body was trying out many different survival strategies—it was evolution on a cellular scale. “A diverse immune response may be advantageous because viruses and other pathogens are also continually evolving,” explained McHeyzer-Williams.

“The training is actually ongoing; they keep on training and keep getting better at their task,” said TSRI Senior Scientific Associate Louise McHeyzer-Williams, who was co-first author of the paper with Pierre Milpied, a TSRI research associate at the time of the study.

With these new findings, the researchers think booster shots could be better designed to manipulate the memory system. “What you add to the boost makes a difference to the balance of cells and the rate of mutation,” said Michael McHeyzer-Williams.

In addition to Michael and Louise McHeyzer-Williams and Milpied, the other author of the study “Switched-memory B cells remodel B cell receptors within secondary germinal centers” (DOI: 10.1038/ni.3095), was Shinji L. Okitsu of TSRI at the time of the study.

The research was supported by the National Institutes of Health (AI047231, AI040215 and AI071182), the Foundation Bettencourt-Schueller, the Swiss National Science Foundation, the Novartis Jubliaeumsstiftung and the Roche Research Foundation.