New fossil gives fresh insight into the evolution and diversity of the dinosaurs that once inhabited the Australian-Antarctic rift valley 113 million years ago. 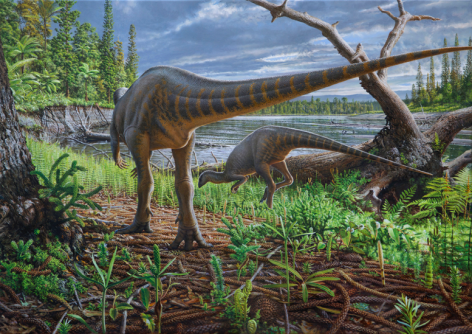 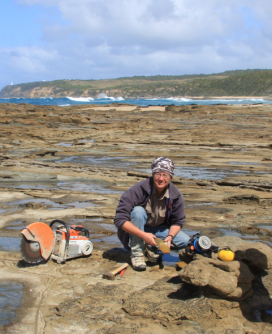 The late David Pickering on the coastal shore-platform near the fossil vertebrate locality of Eric the Red West, where Diluvicursor pickeringi was discovered.

Newswise — The partial skeleton of a new species of turkey-sized herbivorous dinosaur has been discovered in 113 million year old rocks in southeastern Australia. As reported in open access journal PeerJ, the fossilized tail and foot bones give new insight into the diversity of the small, bipedal herbivorous dinosaurs called ornithopods that roamed the great rift valley that once existed between Australia and Antarctica. The new dinosaur has been named Diluvicursor pickeringi, which means Pickering’s Flood-Running dinosaur.

Lower Cretaceous rocks of the deep sedimentary basins that formed within the Australian-Antarctic rift are now exposed as wave-cut rock platforms and sea-cliffs along the south coast of Victoria. The skeleton of Diluvicursor pickeringi was discovered in 2005 by volunteer prospector George Caspar, eroding from such a rock platform at a locality called Eric the Red West, near Cape Otway.

“Diluvicursor shows for the first time that there were at least two distinct body-types among closely related ornithopods in this part of Australia,” Dr Matt Herne, lead author of the new study said.

“One was lightly built with an extraordinarily long tail, while the other, Diluvicursor, was more solidly built, with a far shorter tail. Our preliminary reconstruction of the tail musculature of Diluvicursor suggests this dinosaur was a good runner, with powerful leg retracting muscles,” Dr Herne said.

“Understanding the ecology of these dinosaurs—what they ate, how they moved, where they roamed—based on the interplay between anatomy and the environment presents exciting challenges for future research.”

The species name honors the late David Pickering, who was Museums Victoria’s Collection Manager, Vertebrate Palaeontology. David contributed significantly to Australian paleontology in the lab and field, and tirelessly assisted countless students of paleontology and researchers to achieve their goals. Sadly, David passed away just over a year ago on Christmas Eve 2016.

The site of Eric the Red West has additional importance as it helps build a picture the ancient rift valley ecosystem. Fossil vertebrate remains at this site were buried in deep scours at the base of a powerful river, along with flood-transported tree stumps, logs and branches.

“The carcass of the Diluvicursor pickeringi holotype appears to have become entangled in a log-jam at the bottom of this river,” explained Dr Herne. “The sizes of some of the logs in the deposit and the abundance of wood suggest the river traversed a well-forested floodplain. The logs preserved at the site are likely to represent conifer forests of trees within families still seen in Australia today.”

“Much of the fossil vertebrate material from Eric the Red West has yet to be described, so further dinosaurs and other exciting animals from this site are now anticipated.”

Caption: The late David Pickering on the coastal shore-platform near the fossil vertebrate locality of Eric the Red West, where Diluvicursor pickeringi was discovered. Image credit: Matt Herne.

Caption: The holotype partial skeleton of Diluvicursor pickeringi after it was prepared from several blocks of sandstone by Lesley Kool of Monash University The fossil preserves most of the tail along with the right ankle and foot. Image credit: Steve Poropat and Museums Victoria (CC-BY).

PDF of this Press Release: http://static.peerj.com/pressReleases/2018/01/Press-Release-Herne.pdf

Link to the Published Version of the article (quote this link in your story – the link will ONLY work after the embargo lifts): https://peerj.com/articles/4113  your readers will be able to freely access this article at this URL.

About:  PeerJ is an Open Access publisher of two peer-reviewed journals and a preprint server. PeerJ’s mission is to help the world efficiently publish its knowledge. All works published by PeerJ are Open Access and published using a Creative Commons license (CC-BY 4.0). PeerJ is based in San Diego, CA and the UK and can be accessed at peerj.com

PeerJ has an Editorial Board of over 1,900 respected academics, including 5 Nobel Laureates. PeerJ was the recipient of the 2013 ALPSP Award for Publishing Innovation. PeerJ Media Resources (including logos) can be found at: peerj.com/about/press