New Way to Predict COPD Progression; New Treatment May Be on the Horizon 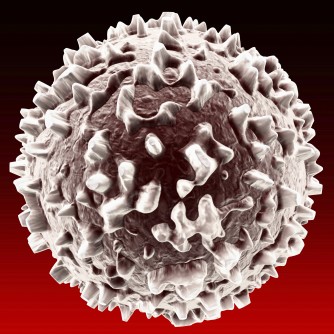 Neutrophils in white blood cells. When their bacteria-fighting ability is weakened, COPD patients have worse outcomes.

Newswise — ATS 2016, SAN FRANCISCO ─ New research has found that a process initiated in white blood cells known as neutrophils may lead to worse outcomes for some patients with chronic obstructive pulmonary disease (COPD). The discovery may help identify patients at higher risk for COPD progression, who might also show little benefit from standard treatments. The study was presented at the ATS 2016 International Conference.

“We have known for many years that neutrophils should be able to fight infection, but we haven’t fully understood why they don’t work in COPD,” said lead author James D. Chalmers, MD, PhD, from the University of Dundee, Scotland. “Our study found that a recently identified form of neutrophil behavior called neutrophil extracellular trap (NET) formation is present in the lungs of COPD patients, and may weaken their ability to eat and kill bacteria.”

“This marker may help us identify patients at higher risk of disease progression,” he said. “And it identifies a subset of patients who may need treatments other than corticosteroids. Our data show that inhaled steroids may even exacerbate NETs, so we need to identify new COPD treatments and discover whether inhibiting NET formation will result in improved clinical outcomes for patients with COPD.”

Dr. Chalmers and colleagues recruited 141 patients with stable COPD for the study. Sputum and blood were collected at the beginning of the study, during acute COPD exacerbations, and at the end of exacerbations. NETs were measured using a validated enzyme-linked immunosorbent assay targeting specific DNA associated NET/protein complexes.

The amount of NET complexes in the lungs of patients in the study was directly related to the severity of their COPD and the risk of exacerbations. NETs increased significantly during exacerbations that did not respond to corticosteroid treatment.

Neutrophilic airway inflammation has been known for some time to be a characteristic feature of COPD. NETs were discovered as an essential part of innate immune response to infection approximately 10 years ago, and scientists are only beginning to understand how NETs impact disease outcomes.

“Some recent studies described the presence of NETs in the COPD lung, so we wanted to know whether there was any relationship between NETs and outcomes in COPD patients,” said Dr. Chalmers. “We are now keen to find out if we can identify why NET formation occurs in these patients and whether it can be prevented or treated. While our new research is at an early stage, we hope that detecting NETs may be a biomarker that can identify patients at risk of deterioration, and that we can work toward testing whether inhibiting NET formation would be a beneficial treatment in COPD.”

Abstract BodyRationale: Neutrophilic airway inflammation is a characteristic feature of chronic obstructive pulmonary disease (COPD). Neutrophil extracellular traps (NETs) are an essential part of the innate immune response to infection and result from the release of a meshwork of neutrophil DNA components and enzymes, which act to capture and kill microorganisms. Recent studies have shown that NET formation has been detected in COPD sputum during stable periods. We investigated the association between NET formation and disease severity in COPD.

Methods: 141 stable patients with COPD were recruited. Induced sputum and serum was collected at baseline, during acute exacerbations and at the end of exacerbations. NETs were measured using a validated enzyme- linked immunosorbent assay targeting specified DNA associated NET/protein complexes.

Results: Mean age was 71 years, 66% were male and the mean FEV1 was 70.4%. NETs were detectable at levels >1000 fold higher in sputum than serum. In sputum from stable patients, NET formation was strongly correlated with airway infection with the strongest association with H. influenzae colonisation. NETS were a strong marker of disease severity, correlating with higher MRC dyspnoea score (P = 0.0045), GOLD 2011 class (P = <0.0001), SGRQ score (P = <0.0001), exacerbations per year (P = 0.0032) and 24hour sputum volume (P = 0.0035) whilst sputum NET concentration was negatively correlated with percent predicted FEV1 (P = 0.0041). Response of NETS during exacerbations were heterogeneous with increases in both serum and sputum NETS during some exacerbations, but no change during others.

Conclusions: Neutrophil extracellular traps are a key component of airway inflammation in COPD and correlate with disease severity and airway infection.