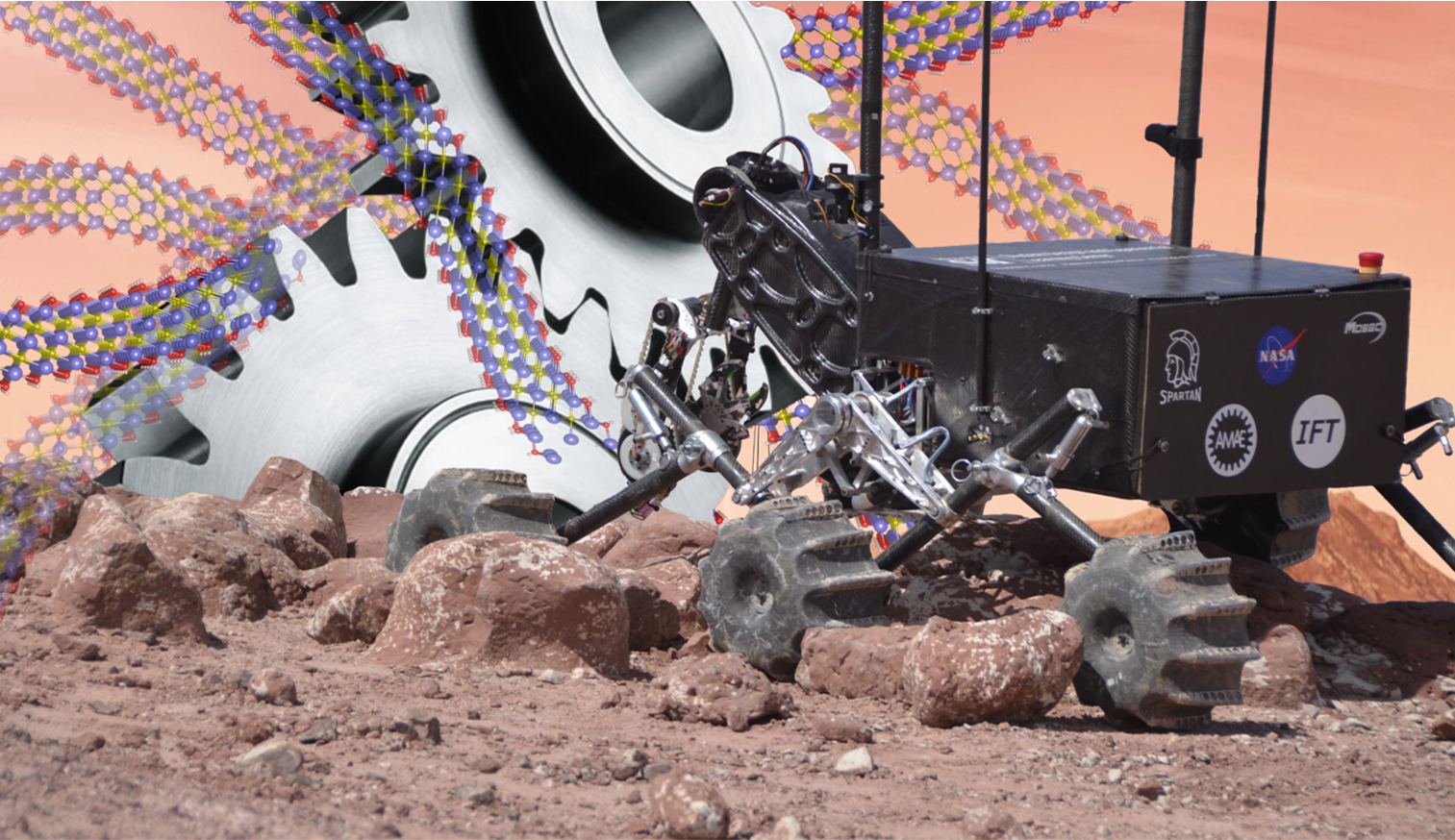 Photo illustration of a Mars rover designed by Missouri S&T students depicting the idea of MXene superlubric sheets applied to the machine’s moving parts to reduce friction and wear.

Newswise — As NASA’s Mars Perseverance Rover continues to explore the surface of Mars, scientists on Earth have developed a new nanoscale metal carbide that could act as a “superlubricant” to reduce wear and tear on future rovers.

Researchers in Missouri S&T’s chemistry department and Argonne National Laboratory’s Center for Nanoscale Materials, working with a class of two-dimensional nanomaterials known as MXenes, have discovered that the materials work well to reduce friction. The materials also should perform better than conventional oil-based lubricants in extreme environments, says Dr. Vadym Mochalin, associate professor of chemistry at Missouri S&T, who is leading the research.

“These superlubric materials are of special interest for advanced anti-wear and lubrication applications in extreme conditions, like those now experienced by the Perseverance rover on Mars,” Mochalin says. He and his colleagues describe their discovery in a paper published in the March 2021 edition of the journal Materials Today Advances (“Achieving superlubricity with 2D transition metal carbides (MXenes) and MXene/graphene coatings”).

Mochalin says he made the connection between this research and Perseverance’s journey to Mars after watching the rover landing.

“When I watched the landing of the rover on Mars, I thought: ‘What if the lubricant in one of its wheels fails? Then I made the connection with our work on MXenes, because it came to mind that we have just found that MXenes demonstrate superlubricity in an atmosphere devoid of oxygen and humidity, close to what is there on Mars,” Mochalin says.

MXenes (pronounced Maxines) are metal carbide materials that possess unusual properties. For example, their ability to conduct electricity makes them candidates for use in energy storage, sensing and optoelectronics. In this latest study of the materials, Mochalin and his team conducted a series of tests to determine how well they act as solid-state lubricants with certain materials.

The researchers conducted ball-on-disk friction tests at the nanometer scale by depositing a titanium carbide MXene onto a silicon substrate (the disk) that was coated with a thin layer of silica, which is the major ingredient of sand. They then tested the MXene’s ability to withstand wear by sliding it against a diamond-like carbon-coated steel ball. They conducted these tests in a dry nitrogen environment, which greatly reduces humidity.

Mochalin says the tests found that the MXene interface between the steel ball and silica-coated disk resulted in a friction coefficient in the “superlubric regime” of 0.0067 to 0.0017. Friction coefficient refers to the amount of friction between two objects and determined by a value that is usually between 0 and 1. The lower the value, the less friction.

When the team added graphene to the titanium carbine MXene, the results were even better. Adding graphene “further reduced the friction by 37.3% and wear by the factor of 2” without affecting the MXene’s superlubricant properties, the researchers write in their paper.

“These results open up new possibilities for exploring the family of MXenes in various tribological applications,” write Mochalin and his colleagues. Tribology is the study of friction, wear and lubrication of interacting surfaces.

While such superlubricants may prove useful for machines in extraterrestrial environments – from Mars rovers to asteroid mining equipment – they also may have more down-to-earth benefits. Unlike oil-based lubricants, MXenes would not rely on non-renewable energy sources such as coal or petroleum, Mochalin says.

Shuohan Huang, a Ph.D. candidate in chemistry at Missouri S&T, is the paper’s lead author and works closely with Mochalin on the study of MXenes. Mochalin’s Missouri S&T group studies the fundamental physics and chemistry of the materials and develops their properties and potential applications in optoelectronics, energy storage, sensing and mechanics.

Huang and Mochalin’s co-authors on the paper are K.C. Mutyala and A.V. Sumant of Argonne National Laboratory’s Center for Nanoscale Materials.

Founded in 1870 as the University of Missouri School of Mines and Metallurgy, Missouri University of Science and Technology (Missouri S&T) is a STEM-focused research university of over 7,600 students and part of the four-campus University of Missouri System. Located in Rolla, Missouri, Missouri S&T offers 99 different degree programs in 40 areas of study, including engineering, the sciences, business and information technology, education, the humanities, and the liberal arts. Missouri S&T is known globally and is highly ranked for providing a strong return on tuition investment, exceptional career opportunities for graduates, and an emphasis on applied, hands-on learning through student design teams and cooperative education and internship opportunities. For more information about Missouri S&T, visit www.mst.edu.