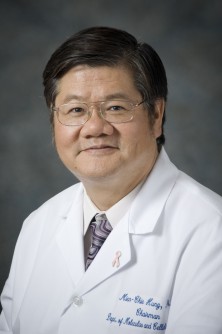 Newswise — Triple-negative breast cancer (TNBC), a highly aggressive, relapse-prone cancer that accounts for one-fourth of all breast cancers, could be the focus of a new area of study for immune checkpoint blockade therapy.  A team of researchers at The University of Texas MD Anderson Cancer Center revealed that in TNBC a cell process called glycosylation is required for PD-L1/PD1 molecules to interact and identified exactly how and why glycosylation is so crucial. Findings from the study were published in the Feb. 12 issue of Cancer Cell.

Immune checkpoint blockade therapy relies on connections between PD-L1 and its sister molecule, PD1, found on T-cell surfaces, allowing cancer cells to go undetected by the immune system. Blocking PD-L1 and PD-1 interaction has been the basis for successful immunotherapies already in use in other cancers.

“Glycosylation is a process that attaches portions of sugar molecules called moieties to the protein providing it fuel to grow and spread,” said Mien-Chie Hung, Ph.D., chair of Molecular and Cellular Oncology. “Glycosylation of PD-L1 in tumor cells stabilizes PD-L1, but it is largely unknown whether sugar moiety by itself is required for binding to PD-1 to suppress anti-tumor immunity.”

Hung’s research group shed further light in this area through discovery of glycosylated PD-L1 (gPD-L1), and worked with STCube Pharmaceuticals, Inc. to develop anti-gPD-L1 antibodies that recognize this glycosylated form of PD-L1, killing tumor cells while not harming healthy ones.

To improve the therapeutic efficacy of anti-gPD-l1 antibody, the team linked a potent small molecule chemotherapy agent, called MMAE, to the anti-gPD-L1, creating a new antibody drug conjugate (ADC), called anti-gPD-L1-MMAE, which resulted in higher therapeutic efficacy in animal models. Hung believes the development of this glycosylated PD-L1 ADC (anti-gPD-L1-MMAE) may represent a new generation of immunotherapy that is more targeted with fewer adverse effects.

“We demonstrated that gPD-L1 is an excellent candidate for ADC as sugar moiety is critical for PD-L1’s detrimental role in TNBC,” said Hung. “Immune checkpoint blockade treatment options remains limited in TNBC, so identifying new immune checkpoint targets to improve upon current therapy is urgently needed.”