“Designer Cardiovascular Therapies:” New Ways on the Horizon to Fix a Broken Heart

21-Feb-2017 11:05 AM EST, by Perelman School of Medicine at the University of Pennsylvania contact patient services
favorite_border 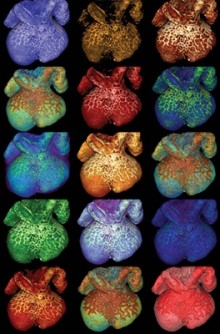 Newswise — Unlike the self-repair abilities of our skin, bone and other tissues, which can readily heal and rebuild themselves after injury, evolution has left the mammalian heart with relatively little regenerative capacity.

More than one million Americans have heart attacks each year. Although many will survive, damage to heart muscle is permanent, causing heart attack survivors to be at an increased risk of a repeated attack or other problems later in life, including congestive heart failure. During a heart attack, blocked arteries cause the heart muscle to become starved for oxygen, and eventually some muscle cells die. Finding new ways to repair and protect a broken heart is the core of labs like those of physician-scientists Jon Epstein, MD, executive vice dean and chief science officer at Penn Medicine, and Rajan Jain, MD an assistant professor of Cardiovascular Medicine.

Their labs are working on a suite of angles for future therapies for failing hearts that include immune cells involved in protecting heart muscle after an attack, stem-like cells and associated growth factors that may one day be able to regenerate heart muscle, and better understanding mutations that lead to heart failure.

Jain and Epstein are looking at how immune cells respond to the damage caused by a heart attack to begin the repair process, which can sometimes result in too much scar tissue. This over-reaction turns the heart into a stiff fibrous organ that can’t pump efficiently. Their work suggests that medicines that act on the immune system might be used to improve outcomes in some patients after a heart attack.

“We are hoping to harness the immune system, just as other research teams at Penn are doing to fight cancer, in order to improve the balance between scar formation and regeneration after a heart attack,” said Epstein. Jain’s work with Epstein on the heart’s interaction with the immune system in post-heart-attack responses hints at the possibility of developing designer cardiovascular therapies.

After a heart attack, cardiac muscle cells are sometimes injured beyond complete repair and having a way to regenerate or replace compromised tissue might extend or enhance the life of a person with heart disease. Studying the development from the stage of an embryo, when the heart forms from stem-like cardiac progenitor cells, is giving cardiologists new ideas for therapies. In particular, scientists want to identify progenitor cells that have matured just beyond the stem-cell stage when they become committed to making only one type of cardiac cell. “We want to one day produce progenitor cells that can be locally delivered or fabricated into transplantable tissue patches – like skin grafts – for heart patients,” Jain said.

In 2015, Jain and Epstein thought that the protein HopX would label a multipotent progenitor cell, but they were surprised to learn that it was marking only cells destined to make heart muscle. A Penn and Stanford group collaborated with many others a year later to describe a roadmap on how to steer one type of human embryo cell population – including those marked by HopX -- down a series of choices to make specific types of cells. This is the first step of many to make the transplantable heart cells that Jain would like to have for heart patients.

Genome OrganizationJain’s ideas for new ways to look at cardiovascular therapies is also informed by the time he has worked in the clinical arena with Anjali Owens, MD, an assistant professor of Cardiovascular Medicine who directs the Penn Center for Inherited Cardiovascular Disease. They were puzzled by the observation that some patients with heart failure had mutations in their lamin proteins –- support proteins that make up an architectural network of struts in a cell’s nucleus.

Researchers think lamins play an important role in organizing a cell’s genetic material and thereby which parts of the genome are available for translating into the collection of proteins that make one cell different from another. Certain lamin mutations that Jain and Owens observed translated into a particularly aggressive type of heart failure in young patients. “My lab’s mission is to better understand how genome organization establishes and maintains cellular identity – and what happens when that finely tuned system goes awry -- in order to guide the development of new therapeutics,” Jain said.

By delving into the unique biology of heart muscle cells, Jain and Epstein have myriad new places to find potential therapies for many Heart Months to come.