Next generation material that adapts to its history

Responsive material changes its behaviour based on earlier conditions 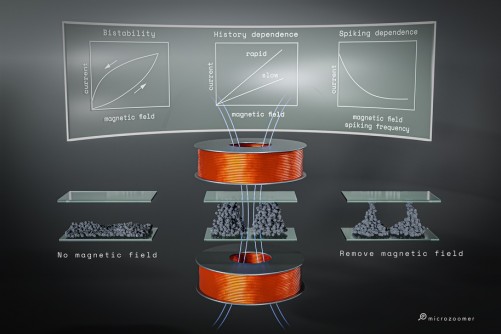 The shape and conductivity of the pillars formed by magnetic beads in a magnetic field depend on the fields' strength and history.

Newswise — Inspired by living systems, researchers at Aalto University have developed a new material that changes its electrical behaviour based on previous experience, effectively giving it a basic form of adaptive memory. Such adaptive materials could play a vital role in the next generation of medical and environmental sensors, as well as in soft robots or active surfaces.

Responsive materials have become common in a range of applications, from glasses that darken in sunlight to drug delivery systems. But existing materials always react in the same way – their response to a change doesn’t depend on their history, nor do they adapt based on their past.

This is fundamentally different from living systems, which dynamically adapt their behaviour based on previous conditions. ‘One of the next big challenges in material science is to develop truly smart materials inspired by living organisms. We wanted to develop a material that would adjust its behaviour based on its history,’ says Bo Peng, an Academy Research Fellow at Aalto University who was one of the senior authors of this study.

The researchers synthesised micrometre-sized magnetic beads which were then stimulated by a magnetic field. When the magnet was on, the beads stacked up to form pillars. The strength of the magnetic field affects the shape of the pillars, which in turn affects how well they conduct electricity.

The system’s memory also allows it to behave in a way that resembles rudimentary learning. Although learning in living organisms is enormously complex, its most basic element in animals is a change in the response of connections between neurons, known as synapses. Depending on how frequently they are stimulated, synapses in a neuron will become harder or easier to activate. This change, known as short-term synaptic plasticity, makes the connection between a pair of neurons stronger or weaker depending on their recent history.

The researchers were able to accomplish something similar with their magnetic beads, even though the mechanism is totally differently. When they exposed the beads to a quickly pulsing magnetic field, the material became better at conducting electricity, whereas slower pulsing made it conduct poorly.

‘This is reminiscent of short term-synaptic plasticity,’ says Aalto’s Distinguished Professor Olli Ikkala. ‘Our material functions a bit like a synapse. What we’ve demonstrated paves the way for the next generation of life-inspired materials, which will draw on biological process of adaptation, memory and learning.’

‘In the future, there could be even more materials that are algorithmically inspired by life-like properties, though they won’t involve the full complexity of biological systems. Such materials will be central to the next generation of soft robots and for medical and environmental monitoring,’ adds Ikkala.

The findings were published in the journal Science Advances.