NIH Awards Up to $130 Million for Flu Vaccine Development

Most people infected with influenza will recover, but it can be deadly. 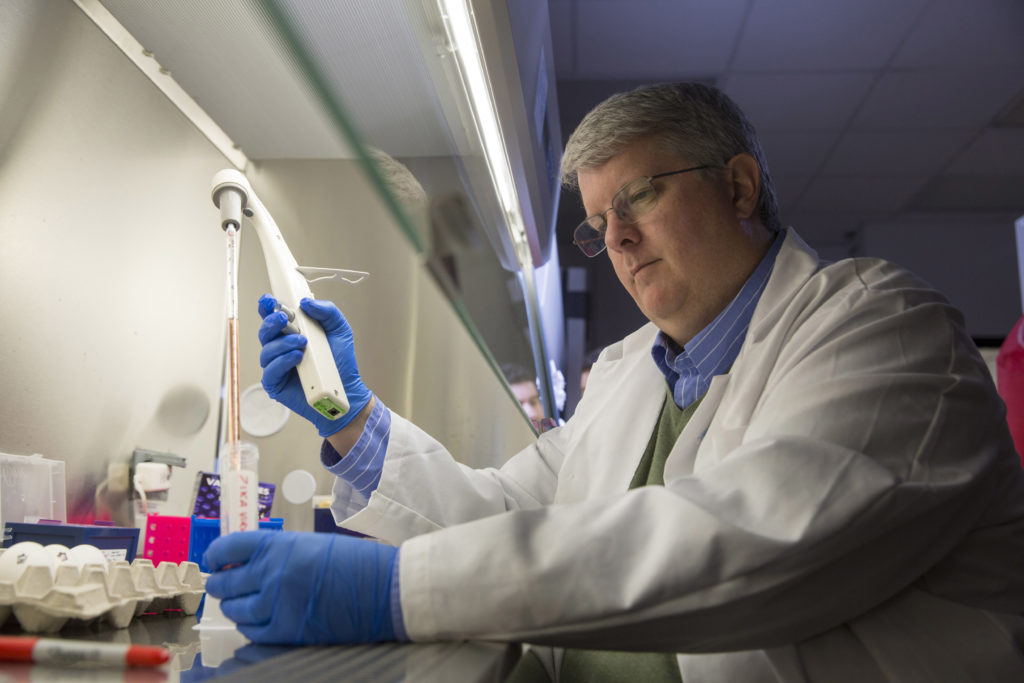 Newswise — Athens, Ga. –The University of Georgia has signed a contract with the National Institutes of Health for an initial award of $8 million to develop a new, more advanced influenza vaccine designed to protect against multiple strains of influenza virus in a single dose. The total funding could be up to $130 million over seven years if all contract options are exercised.

UGA faculty will lead one of NIH’s new prestigious Collaborative Influenza Vaccine Innovation Centers (CIVICs) and collaborate with teams from 14 other universities and research institutes to create and test new vaccines that may one day replace seasonal vaccines administered every year during flu season.

The university expects that over the seven-year contract span, the project will be the largest award ever received by the University of Georgia.

“As we continue to build the research enterprise at the University of Georgia, we are increasing the ability of our faculty to make a profound impact on the world,” said President Jere W. Morehead. “UGA’s investments in biomedical sciences, particularly in the area of infectious diseases, make us eminently qualified to be part of this national initiative.”

The project, led by Ted M. Ross, Georgia Research Alliance Eminent Scholar of Infectious Diseases in UGA’s College of Veterinary Medicine and director of UGA’s Center for Vaccines and Immunology, will include specific attention to vaccine research for high-risk populations.

“The main goal of our project is to identify vaccines that are broadly protective, meaning that they will protect people against most of the versions of the influenza virus that infect humans,” said Ross. “But we are particularly interested in developing a vaccine that protects the most vulnerable people in our population, including children, the elderly or people with weakened immune systems.”

Most people infected with influenza will recover, but it can be deadly.

During the 2017-2018 flu season, for example, influenza killed more than twice the number of people who died in motor vehicle accidents in the U.S. An estimated 48.8 million people were infected, 959,000 were hospitalized and about 79,400 died from influenza, according to the Centers for Disease Control and Prevention.

“People with weakened immune systems, such as those who are undergoing chemotherapy treatments, are particularly vulnerable to influenza, but so are people who are obese, diabetic or have heart disease,” Ross said. “Influenza can also be dangerous for pregnant women or women who have recently given birth.”

“We need better vaccines to protect these populations because our seasonal vaccines are not always as effective as we would like them to be,” he said.

Every year, epidemiologists around the world monitor the influenza viruses circulating in the human population.  About eight to nine months in advance of the next influenza season, public health scientists use this data to select influenza virus strains to make the annual seasonal influenza vaccine.

It then takes many months and considerable amounts of money to make the annual seasonal influenza vaccine. Unfortunately, the manufacturing process cannot quickly pivot to a different vaccine if a new strain emerges during that time period.

“The vaccines we will develop could eliminate some of the guesswork in this process by protecting against multiple forms of influenza, even those we don’t know exist yet,” Ross said.

Ross and his collaborators will use a computational algorithm to analyze all of the genetic versions of a particular flu type and bundle the results into a single molecule—like taking every novel in a library and combining them into one giant book.

The researchers can then use these large molecules to create vaccines that recognize most or all the different iterations of the influenza virus, meaning that one dose could protect against many strains over several years.

Ross will direct the program in conjunction with Dr. Stacey Schultz-Cherry, an infectious disease expert at St. Jude Children’s Research Hospital. They will lead a team of clinicians, immunologists, virologists, data managers and statisticians to identify the most promising vaccine candidates for human trials.

“Opportunities such as this one are exactly why we are committed to building UGA’s research enterprise,” said David Lee, vice president for research. “I’m confident that, under Dr. Ross’ leadership, this project will make significant strides toward developing a reliable vaccine that will protect millions of Americans against potentially deadly flu infections.”

The contract includes a base budget of $8 million for the first year of work, which begins   this month. With NIH approval, the project is expected to continue at the same base amount of approximately $8 million per year for a total of seven years, through 2026.

In addition, UGA and NIH have also negotiated 33 expanded budget options, which NIH may exercise for up to a total of $130 million over the seven years of the project.

This project has been funded by the National Institute of Allergy and Infectious Diseases, a component of the NIH, Department of Health and Human Services, under contract 75N93019C00060.