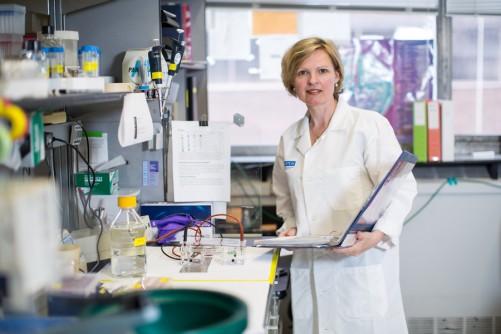 Newswise — August 29, 2016—(BRONX, NY)— Tuberculosis (TB) is the leading cause of death worldwide among people infected with HIV. But as yet, no test can reliably show when latent (inactive) TB infections in people with HIV starts progressing to active—and potentially fatal—TB disease. Now, a researcher at Albert Einstein College of Medicine has received a five-year, $3.7 million National Institutes of Health grant to identify biomarkers that signal an increase in activity by Mycobacterium tuberculosis (Mtb), the bacterium that causes TB, in people with HIV.

“While infection with HIV or TB is usually manageable, the combination of the two diseases is particularly deadly,” said the study’s principal investigator, Jacqueline M. Achkar, M.D., M.S., associate professor of medicine and of microbiology & immunology at Einstein and attending physician, medicine at Montefiore. “There is an urgent need for a test that can detect increasing Mtb activity in people with HIV, which could help optimize the timing of preventive TB therapy and may increase its effectiveness.”

Dr. Achkar’s team previously used novel screening technology to find more than 200 proteins that appear in the blood of HIV-positive individuals who have active TB infection but not in those with latent TB. The current study seeks to build on those findings by identifying a specific set of host proteins and antibodies that directly correlate with increasing Mtb infection activity in people infected with HIV but who don’t yet have symptoms of TB disease. The findings will then be used to develop prototype tests that can be validated in clinical trials. The researchers will also create a multi-platform model for predicting which individuals with HIV are at risk for developing active TB.

Approximately 34 million people worldwide are infected with HIV, and at least one-third of them are co-infected with Mtb, according to USAID (the U.S. Agency for International Development). Co-infection with HIV and TB is especially common in Africa and is a growing concern in Asia, where TB now accounts for 40 percent of AIDS deaths. HIV infection weakens the immune system, increasing the risk that latent TB infections will become active. Conversely, TB infection promotes the replication of HIV and accelerates the progression of HIV to AIDS. People co-infected with Mtb and HIV are 30 times more likely to develop active TB than are those infected with Mtb alone.

Clinical trials have shown that TB medications can prevent latent TB infections from progressing to active TB. “The problem is that it’s not practical or even possible to give these medications to all those who are co-infected with HIV and TB. In addition, the protective effects are often not durable.” said Dr. Achkar. “If we could measure the Mtb activity level in co-infected individuals and determine who is at risk for progression to active TB, we would have a better idea of when to intervene with TB drugs.”

About Albert Einstein College of MedicineAlbert Einstein College of Medicine is one of the nation’s premier centers for research, medical education and clinical investigation. During the 2015-2016 academic year, Einstein is home to 731 M.D. students, 193 Ph.D. students, 106 students in the combined M.D./Ph.D. program, and 278 postdoctoral research fellows. The College of Medicine has more than 1,900 full-time faculty members located on the main campus and at its clinical affiliates. In 2015, Einstein received $148 million in awards from the National Institutes of Health (NIH). This includes the funding of major research centers at Einstein in aging, intellectual development disorders, diabetes, cancer, clinical and translational research, liver disease, and AIDS. Other areas where the College of Medicine is concentrating its efforts include developmental brain research, neuroscience, cardiac disease, and initiatives to reduce and eliminate ethnic and racial health disparities. Its partnership with Montefiore Medical Center, the University Hospital and academic medical center for Einstein, advances clinical and translational research to accelerate the pace at which new discoveries become the treatments and therapies that benefit patients. Through its extensive affiliation network involving Montefiore, Jacobi Medical Center—Einstein’s founding hospital, and three other hospital systems in the Bronx, Brooklyn and on Long Island, Einstein runs one of the largest residency and fellowship training programs in the medical and dental professions in the United States. For more information, please visit www.einstein.yu.edu, read our blog, follow us on Twitter, like us on Facebook, and view us on YouTube.