NIH grant will give professor, undergraduates a boost in researching riboswitches 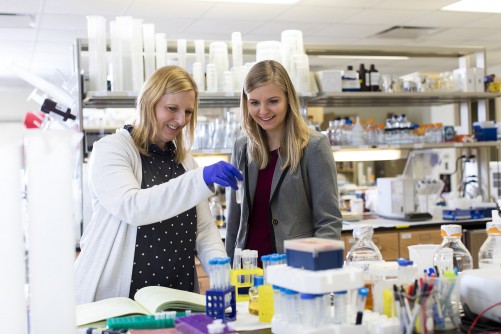 Creighton biochemistry professor Juliane Strauss-Soukup and her lab staffed by undergraduates have earned an NIH grant to study riboswitches.

Newswise — Not so very long ago, when Juliane Strauss-Soukup, PhD, was studying biochemistry in graduate school, it was known that DNA is translated into RNA that plays various roles in coding for protein, but beyond that, much was still left to be discovered.

Only about 2 to 5 percent of DNA codes for proteins, and in more recent years it has been determined the rest of our genome is translated into RNA called noncoding RNA (ncRNA). Soukup, a Creighton University professor of biochemistry and director of the Center for Undergraduate Research and Scholarship (CURAS), has spent her career exploring the functions of these noncoding RNAs.

In June, Soukup and her lab earned a three-year, $436,000 grant from the National Institutes of Health to study the structure and function of ncRNAs, with the long-term goal of developing antibiological agents, including the potential for some cancer-fighting applications.

“The involvement of undergraduates in this cutting-edge work is essential to their training as scientists,” said Soukup, whose lab is usually staffed by 10-16 undergraduate students, and the students did a lion’s share of the work collecting preliminary data for this proposal. “Taking classes is just one part of a biochemistry major’s curriculum. Designing experiments, analyzing data and critically thinking about results is an exhilarating and exciting part of learning science. When you discover something that no one else in the world yet knows, it’s an awesome feeling. I am so glad undergraduates get to experience this in my research group.”

Soukup and her lab are studying the non-coding parts of RNAs called riboswitches. When small molecules, ligands or metabolites bind to riboswitch RNAs they induce a structural change in the RNA that “switches” the production of protein up or down. Although riboswitches are widespread among bacteria, none have been found in animals.

The NIH grant will specifically aid Soukup’s lab in looking at the potential, in humans, for RNA riboswitches to affect protein production. She said there is reason to think such a possibility exists and the opportunity could mean big things for clinical applications.

“In bacteria, riboswitches control a number of essential metabolic pathways,” Soukup said. “If we are somehow able to dysregulate genes controlled by riboswitches, such as those involved in cancer progression or those needed for the increased metabolism of tumor cells, we may have a new target for chemotherapy.”

Soukup and her team will do the majority of their experiments in her lab, but they will also collaborate with scientists at the University of Nebraska Medical Center, where undergraduate researchers will have access to X-ray crystallography.

As collaborations are often essential in science, Soukup said students will get an invaluable opportunity to experience a cooperative project as undergraduates. For undergraduate researchers on the project, an opportunity to not only work on a potentially groundbreaking study but also receive a grant from arguably the world’s most prestigious health sciences research body has given a positive jolt to their work and aspirations.

“I would do research wherever, whenever,” said Zach Frevert, a senior biochemistry major from Papillion who has worked in Soukup’s lab for two years and plans to go on to graduate school. “But having a chance to work on this National Institutes of Health-funded project is really exciting. I’ve absolutely loved every minute of my time in Dr. Soukup’s lab so far.”

Creighton has continued to become known for undergraduate research opportunities, like the ones now funded in Soukup’s lab by this NIH R15 grant. Soukup said experiences like these are essential for students like Frevert who wish to go on to graduate school, and the emphasis on undergraduate research have set Creighton apart on a national scale. For the past four years, Creighton has been named one of U.S. News & World Report’s Top Schools for Undergraduate Research/Creative Projects. Creighton is the only Catholic school appearing on the list.