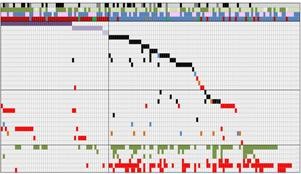 Newswise — Scientists have mapped the genetic changes that drive tumors in rhabdomyosarcoma, a pediatric soft-tissue cancer, and found that the disease is characterized by two distinct genotypes. The genetic alterations identified in this malignancy could be useful in developing targeted diagnostic tools and treatments for children with the disease. The study, by researchers at the National Cancer Institute (NCI), part of the National Institutes of Health, and their colleagues, appeared in the Jan. 23, 2014, issue of the journal Cancer Discovery.

Rhabdomyosarcoma is the most common soft-tissue sarcoma in children and affects muscles in any part of the body. Among patients diagnosed with non-metastasized disease, about 80 percent survive at least five years, although they may experience substantial treatment-related toxic effects. However, for those with metastatic disease, the five-year survival rate is about 30 percent even with aggressive treatment.

NCI’s effort to characterize the genetic events that contribute to rhabdomyosarcoma was led by Javed Khan, M.D., head of the Oncogenomics Section, Pediatric Oncology Branch, Center for Cancer Research, and Jack Shern, M.D., a clinical fellow.

“These studies are very difficult to do because tissue acquisition and validation is so complex,” said Khan. “It must be noted therefore that this work would not have been possible without our brave pediatric patients and their families. In the face of their life-threatening disease, they offered their tumors for study knowing that they would not personally benefit from this work but in the hope that investigators might learn lessons that would help children diagnosed with rhabdomyosarcoma in the future.”

Khan’s team used a number of advanced sequencing techniques to investigate the genetic changes in a total of 147 rhabdomyosarcoma tumors which were paired with normal tissue samples. These sequencing tools allowed them to unravel the complex molecular events that occur in tumor cells, compare normal DNA with tumor DNA, identify mutations in genes, and determine exactly which genes are turned on (activated) or turned off (deactivated), leading to progression of this cancer.

Through their studies, they identified two distinct genotypes of rhabdomyosarcoma tumors. The first genotype is characterized by either a PAX3 or PAX7 fusion gene; a fusion gene is a gene made by joining parts of two different genes. The second genotype lacks a PAX fusion gene but harbors mutations in key signaling pathways; a signaling pathway is a group of proteins that work together to regulate one or more cell functions, such as cell division or cell death.

The researchers also found that, as in other types of pediatric cancers, the overall number of alterations in tumor DNA that develop over the children’s lifespan (known as somatic mutations) were relatively low compared to DNA alterations that children were born with. The somatic mutation rate was especially low in tumors with a PAX fusion gene. Nevertheless, they did find relatively frequent somatic mutations in several genes, including NRAS, KRAS, HRAS, FGFR4, PIK3CA, CTNNB, all of which had previously been found to be mutated in rhabdomyosarcoma, as well as the genes FBXW7 and BCOR, which had not been previously associated with this disease.

Moreover, they identified mutations in additional genes in the RAS/PIK3CA signaling pathway. Overall, alterations in this pathway were found in 93 percent of rhabdomyosarcoma tumors. Intriguingly, many of the genes mutated in the tumors that did not have a PAX fusion gene were found to be turned on or off by proteins produced by PAX fusion genes.

“Although more work is needed, our study may provide researchers with the rationale to develop genomics-guided therapeutic interventions with greater efficacy and fewer side effects than the treatments options currently available for pediatric patients with rhabdomyosarcoma,” Shern said.

Building on this research, Khan and his team will design and test interventions that target the genetic drivers identified in this genomic analysis of rhabdomyosarcoma.