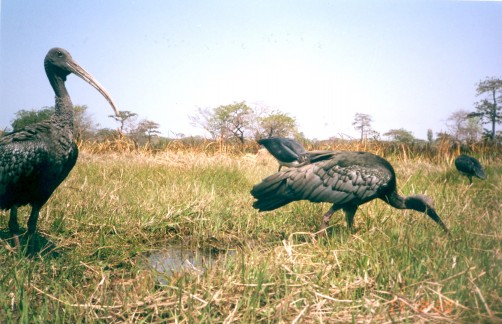 Newswise — Preah Vihear (August 1, 2017) –The Wildlife Conservation Society (WCS), working in collaboration with Cambodia’s Ministry of Environment (MoE), announced today that 19 nests of the giant ibis (Thaumatibis gigantea) have been discovered during the current breeding season in the Northern Plains of Cambodia in Preah Vihear Province. Community members and conservationists are working together under the Bird Nest Protection Program to protect these nests from human disturbances and other threats.

The giant ibis, Cambodia’s national bird, is listed as Critically Endangered on the IUCN Red List, and occurs only in Cambodia and the Lao People’s Democratic Republic. About 99 percent of the global population, estimated to contain 194 mature individuals, lives in Cambodia, making it the most important country in the world for giant ibis conservation.

WCS, in collaboration with MoE, has been involved in the conservation of the giant ibis and its natural habitat in the Northern Plains of Cambodia through various activities. These include the Bird Nest Protection Program, in which local people and contracted community wildlife rangers are rewarded with ‘direct conservation payments’ when they locate nests, and receive a bonus if nestlings successfully fledge. The program also promotes awareness about the importance of this species, and installs protective measures on nesting trees that prevent small carnivores from eating eggs.

Nest protection in the Northern Plains of Cambodia is supported by the Akron Zoo, Sam Veasna Centre, the European Union, and Margaret A. Cargill Philanthropies.