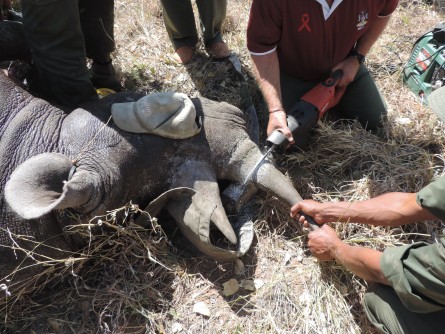 A sedated black rhino in the process of being dehorned, with a cap over its eye to protect it from the dust 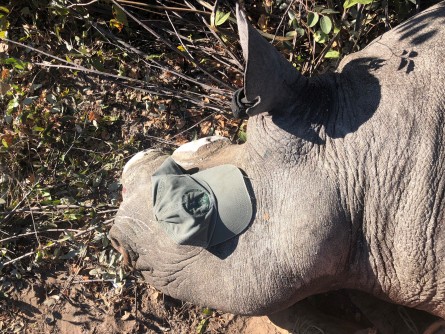 A black rhino that has just been dehorned, with a cap over its eye to protect it from the dust

Newswise — There are no statistically significant differences in key factors of population growth - breeding, birth, survival, life span and death -  between dehorned or horned black rhinos new research, conducted by the University of Bristol Vet School, Namibian Ministry of Environment, Forestry and Tourism, and Save the Rhino Trust has found.

The black rhino is critically endangered, with poaching one of several threats to the species’ survival. Many reserves across a number of African countries, including Namibia, South Africa, and Zimbabwe, now dehorn their rhinos in an attempt to reduce poaching but few studies have looked at the impacts of dehorning, particularly in black rhinos.

The study aimed to build on existing knowledge of population productivity between dehorned and horned individuals in four sub-populations of black rhino (of the sub-species Diceros bicornis bicornis) in Namibia.

Three of the populations had undergone some level of dehorning at least once while one of the populations had never been dehorned. The measures investigated included: age of females at the birth of their first calf (age at first reproduction or AFR); average time between the birth of calves for each female (inter-calving interval); birth sex ratios, calf survival, life span and cause of death

The study found no evidence that dehorning has a negative impact on black rhinos, which is encouraging for the continued use of dehorning as an anti-poaching technique in this species. It is vital that anti-poaching measures themselves do not compromise the population growth of rhinos.

Previously it has been suggested that dehorning could have some effect on rhino behaviour and biology, either through the consequences of not having a horn or the dehorning process itself, where the animal has to be sedated.

Lucy Chimes, former MSc student from the University of Bristol Veterinary School, said: “In an ideal world no one would want to remove arguably one of the most iconic features of a rhino, its horn, but unfortunately this is not an ideal world and relentless poaching has forced many reserves to resort to dehorning.

“Our study found there were no statistically significant differences in any of the measures of population productivity evaluated between dehorned and horned rhinos, which is reassuring for the use of dehorning as an anti-poaching deterrent in black rhinos.”

Due to the small sample size, more research is needed following the findings. It is particularly important for future studies to collate data from as many reserves, conservancies and national parks across as many countries as possible, so a larger analysis not only on the effects of dehorning but also its effectiveness as an anti-poaching deterrent can be conducted. Sharing of data will also allow for larger studies across wider areas on other aspects such as rhino behaviour, habitat use and management practices.

The research was approved by the University of Bristol Animal Welfare and Ethical Review Body (AWERB) (reference number: UIN/21/049) and the Namibian National Commission on Research, Science and Technology (permit number: RPIV01042026).