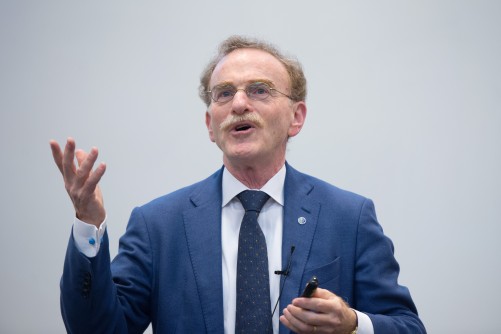 Newswise — Nobel Prize winner Dr Randy Schekman has given the keynote speech at the opening of the latest addition to Warwick Medical School.

Dr Schekman, who was honoured for his pioneering work in the fields of cell physiology and genetics flew in from the States on 11 August to mark the official opening of the Mechanochemical Cell Biology Building (MCBB) extension.

The MCBB extension houses an extensive tissue culture and microscope facility and will pave the way for the discovery and design of new diagnostics and treatments for human disease. It will enable researchers to uncover the cytoskeletal and molecular motor-based mechanisms driving cell division, migration, organisation and macromolecular transport using novel imaging, computational and biophysical approaches. Warwick Medical School is part of the University of Warwick and the MCBB is on the Medical School’s campus at Gibbet Hill.

Dr Randy Schekman is a University Professor in the Department of Molecular and Cell Biology, University of California, Berkeley, and an Investigator at the Howard Hughes Medical Institute. In 2013 he shared for the Nobel Prize in Physiology or Medicine with two other scientists, James Rothman and Thomas Südhof, for their discovery of the machinery that regulates vesicle trafficking, a major transport system in all cells. Dr Schekman’s discoveries have had a direct impact on the medical and biotechnology fields, for example through the molecular engineering of yeast to release therapeutically useful agents, such as insulin and human growth hormone.

Following the official opening by the Vice Chancellor Professor Stuart Croft, Dr Schekman delivered his key note speech in which he discussed the scientific and personal influences that led him to the many key discoveries of his 40-year career.

Dr Schekman said: “It’s been a pleasure to be invited to help commemorate the opening of the new extension and to meet a host of outstanding cell biologists and biophysicists at Warwick Medical School. It is extremely encouraging to see the University invest in this vital field of research.”

Notes to editorsAbout Dr Randy SchekmanDr Randy Schekman is a University Professor in the Department of Molecular and Cell Biology, University of California, Berkeley, and an Investigator of the Howard Hughes Medical Institute. He studied the enzymology of DNA replication as a graduate student with Arthur Kornberg at Stanford University. His current interest in cellular membranes developed during a postdoctoral period with S. J. Singer at the University of California, San Diego. At Berkeley, he developed a genetic and biochemical approach to the study of eukaryotic membrane traffic.Among his awards are the Eli Lilly Award in microbiology and immunology, the Lewis S. Rosenstiel Award in basic biomedical science, the Gairdner International Award, the Amgen Award of the Protein Society, the Albert Lasker Award in Basic Medical Research, the Louisa Gross Horwitz Prize of Columbia University, the Dickson Prize in Medicine from the University of Pittsburgh, the Massry Prize, the E.B Wilson Award of the American Society of Cell Biology, the Kornberg-Berg lifetime achievement award from Stanford Medical School and the Otto Warburg Prize of the German Society for Biochemistry and Molecular Biology. In 2013, he shared the Nobel Prize in Physiology or Medicine with James Rothman and Thomas Südhof.

He has been awarded honorary doctorate degrees from the University of Geneva, the University of Regensburg, The Pontificia Universidad Católica de Chile, the University of Chile and the Chinese University of Hong Kong. He is a member of the National Academy of Sciences, the American Academy of Arts and Sciences, the American Philosophical Society, a Foreign Associate of the Accademia Nazionale dei Lincei and a Foreign Associate of the Royal Society of London. In 1999, he was elected President of the American Society for Cell Biology and was appointed Editor of the Annual Review of Cell and Developmental Biology. From 2002-2012, he served as the Scientific Director of the Jane Coffin Childs Memorial Fund for Biomedical Research. In 2006 he was appointed Editor-in-Chief of the Proceedings of the NAS. In 2011, he stepped down from the PNAS position to become Editor-in-Chief of an Open Access journal, eLife, sponsored by the HHMI, Wellcome Trust and the Max Planck Society.

At UC Berkeley, Schekman has assumed a number of leadership positions in Departmental and campus affairs. In addition to serving a five-year term as Biochemistry Division Head, Schekman served as Chair of the Department of Molecular and Cell Biology. From 2002–2012, he served as Chair of the Chancellor’s Advisory Council on Biology, a virtual College of Biology that represents all 250 life science faculty distributed within the College of Letters and Science, School of Public Health, School of Optometry, School of Engineering, College of Chemistry, and College of Natural Resources. In 2004, Schekman organized a campus-wide stem cell biology center to capitalize on California’s investment in the application of human embryonic stem cells to regenerative medicine.