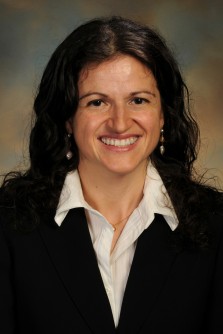 Marisa Roberto, PhD, is an associate professor in the addiction research department, known as the Committee on the Neurobiology of Addictive Disorders, at The Scripps Research Institute.

Newswise — LA JOLLA, CA — January 8, 2014 — Collaborating scientists at The Scripps Research Institute (TSRI), the National Institutes of Health (NIH) and the University of Camerino in Italy have published new findings on a system in the brain that naturally moderates the effects of stress. The findings confirm the importance of this stress-damping system, known as the nociceptin system, as a potential target for therapies against anxiety disorders and other stress-related conditions.

“We were able to demonstrate the ability of this nociceptin anti-stress system to prevent and even reverse some of the cellular effects of acute stress in an animal model,” said biologist Marisa Roberto, associate professor in TSRI’s addiction research department, known as the Committee on the Neurobiology of Addictive Disorders.

Roberto was a principal investigator for the study, which appears in the January 8, 2014 issue of the Journal of Neuroscience.

A Variety of Effects

Nociceptin, which is produced in the brain, belongs to the family of opioid neurotransmitters. But the resemblance essentially ends there. Nociceptin binds to its own specific receptors called NOP receptors and doesn’t bind well to other opioid receptors. The scientists who discovered it in the mid-1990s also noted that when nociceptin is injected into the brains of mice, it doesn’t kill pain—it makes pain worse.

The molecule was eventually named for this “nociceptive” (pain-producing) effect. However, subsequent studies demonstrated that, by activating its corresponding receptor NOP, nociceptin acted as an antiopioid and not only affected pain perception, but also blocked the rewarding properties of opioids such as morphine and heroin.

Perhaps of greatest interest, several studies in rodents have found evidence that nociceptin can act in the amygdala, a part of the brain that controls basic emotional responses, to counter the usual anxiety-producing effects of acute stress. There have been hints, too, that this activity occurs automatically as part of a natural stress-damping feedback response.

Scientists have wanted to know more about the anti-stress activity of the nociceptin/NOP system, in part because it might offer a better way to treat stress-related conditions. The latter are common in modern societies, including post-traumatic stress disorder as well as the drug-withdrawal stress that often defeats addicts’ efforts to kick the habit.

For the new study, Roberto and her collaborators looked in more detail at the nociceptin/NOP system in the central amygdala.

First, Markus Heilig’s laboratory at the National Institute on Alcohol Abuse and Alcoholism (NIAAA), part of the NIH, measured the expression of NOP-coding genes in the central amygdala in rats. Heilig’s team found strong evidence that stress changes the activity of nociceptin/NOP in this region, indicating that the system does indeed work as a feedback mechanism to damp the effects of stress. In animals subjected to a standard laboratory stress condition, NOP gene activity rose sharply, as if to compensate for the elevated stress.

Roberto and her laboratory at TSRI then used a separate technique to measure the electrical activity of stress-sensitive neurons in the central amygdala. As expected, this activity rose when levels of the stress hormone CRF rose and started out at even higher levels in the stressed rats. But this stress-sensitive neuronal activity could be dialed down by adding nociceptin. The stress-blocking effect was especially pronounced in the restraint-stressed rats—probably due to their stress-induced increase in NOP receptors.

Finally, biologist Roberto Ciccocioppo and his laboratory at the University of Camerino conducted a set of behavioral experiments showing that injections of nociceptin specifically into the rat central amygdala powerfully reduced anxiety-like behaviors in the stressed rats, but showed no behavioral effect in non-stressed rats.

The three sets of experiments together demonstrate, said Roberto, that “stress exposure leads to an over-activation of the nociceptin/NOP system in the central amygdala, which appears to be an adaptive feedback response designed to bring the brain back towards normalcy.”

In future studies, she and her colleagues hope to determine whether this nociceptin/NOP feedback system somehow becomes dysfunctional in chronic stress conditions. “I suspect that chronic stress induces changes in amygdala neurons that can contribute to the development of some anxiety disorders,” said Roberto.

Compounds that mimic nociceptin by activating NOP receptors—but, unlike nociceptin, could be taken in pill form—are under development by pharmaceutical companies. Some of these appear to be safe and well tolerated in lab animals and may soon be ready for initial tests in human patients, Ciccocioppo said.

Other contributors to the study, “Restraint stress alters nociceptin/orphanin FQ and CRF systems in the rat central amygdala: significance for anxiety-like behaviors,” were Giordano de Guglielmo and Massimo Ubaldi of the University of Camerino; Anita Hansson, who worked in the Heilig laboratory at NIAAA during the study; Marsida Kallupi, who worked in both the Roberto laboratory at TSRI and the Ciccocioppo Laboratory at the University of Camerino during the study; and Maureen Cruz and Christopher Oleata of TSRI. See http://www.jneurosci.org/content/34/2/363.abstract