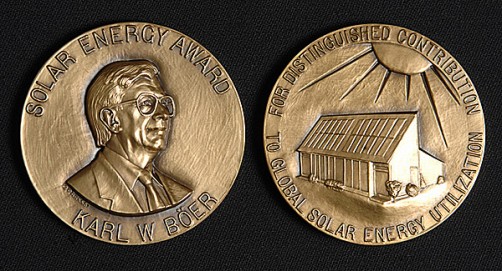 Front and back of the Karl W. Böer Solar Energy Medal of Merit, to be presented in 2015, along with a $60,000 cash prize, in a ceremony at the University of Delaware.

Newswise — The University of Delaware invites nominations for the 2015 Karl W. Böer Solar Energy Medal of Merit. The formal announcement and nomination form are available at this website: http://www.energy.udel.edu/boer.html

The announcement was made by Michael T. Klein, Dan Rich Chair of Energy and director of the University of Delaware Energy Institute. Klein serves as the executive director of the Karl W. Böer Solar Energy Medal of Merit Trust, which funds the prestigious award.

The medal of merit is named in honor of Karl Wolfgang Böer, Distinguished Professor Emeritus of Physics and Solar Energy at UD and founder of the Institute of Energy Conversion (IEC). Since its founding in 1972, IEC has been at the forefront of photovoltaic research. It is the oldest solar cell institution in the world and is a U.S. Department of Energy-designated University Center of Excellence for Photovoltaic Research and Education.

The first Karl W. Böer Solar Energy Medal of Merit was presented in 1993 to former U.S. President Jimmy Carter, who was cited as “the one individual who, more than anyone else, spurred development and focused world attention on the relatively unknown technology for safe and environmentally sound energy production from the sun.”

In 2013, the medal recipients were Zhores I. Alferov, Nobel Laureate, professor and president of the St. Petersburg Academic University of the Russian Academy of Sciences, and Viacheslav M. Andreev, professor and head of the laboratory of the A.F. Ioffe Physico-Technical Institute in St. Petersburg. They were honored for their pioneering contributions to the investigation and development of semiconductor device technology and physics, which have improved the performance and efficiency of solar cells for both space and terrestrial applications.

2013, Zhores I. Alferov and Viacheslav M. AndreevFor their contributions to the investigation and development of semiconductor device technology and physics, which have led to greater performance and efficiency of solar cells and arrays.

2011, Richard M. SwansonFor his innovation in the field of photovoltaics and for his tenure as president of SunPower Corporation.

2009, Hermann Scheer For his long-lasting and worldwide commitment to the dissemination of solar energy.

2007, Lawrence Kazmerski For his leadership in the field of solar electricity from its infancy.

2005, Yoshihiro Hamakawa For his significant pioneering contributions to the development of high-efficiency thin-film solar cells and the advancement of solar photovoltaic science and technology as a clean energy source.

2003, Martin A. Green For his innovative research efforts in the development of high performance crystalline silicon solar cell technology.

1999, Stanford R. Ovshinsky For pioneering the science of amorphous semiconductors resulting in the development of low-cost thin-film silicon solar cells.

1997, Adolf Goetzberger For his leadership in the international solar energy community, his research accomplishments and for founding the eminent Fraunhofer Institute for Solar Energy Systems.

1993, President Jimmy Carter The one individual who, more than anyone else, spurred development and focused world attention on the relatively unknown technology for safe and environmentally sound energy production from the sun.