The legendary producer, filmmaker and activist will receive the Rod Serling Award for Advancing Social Justice Through Popular Media from Ithaca College. 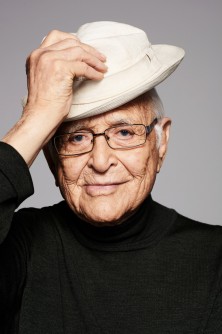 Newswise — Norman Lear, the producer and filmmaker who transformed the American cultural landscape with television shows like “All in the Family” and “The Jeffersons,” will be presented with the 2018 Rod Serling Award for Advancing Social Justice Through Popular Media on Thursday, Nov. 15.

Established by Ithaca College, the Serling Award is given to contemporary media industry professionals whose work highlights prejudice, inequality and evolving social norms. The award is presented in honor of “The Twilight Zone” creator Rod Serling and his pioneering efforts in the television industry. Serling taught at the college from 1967 to 1975.

“Perhaps the most powerful thing that popular media can do for today’s society is to spark difficult and meaningful conversations in families, communities, and among friends,” said Diane Gayeski, dean of the Roy H. Park School of Communications. “Over the past 50 years, Norman Lear’s work has done just that. Like Serling, Norman Lear seduces the audience with creative story-telling and induces them to look deep inside themselves to find both the glimmers of humanity and the dark coals of hatred.”

Lear’s iconic 1970s television shows, including “Maude,” “Good Times,” “Sanford and Son” and “Mary Hartman, Mary Hartman,” brought social and cultural issues into America’s living rooms for the first time. At 96 years old, Lear has no plans to retire. He serves as executive producer for the critically acclaimed “One Day at a Time” on Netflix and the award-winning docuseries “America Divided” on Epix. He is currently developing an animated series with Nickelodeon, called “Man of the House.”

Lear entered the world of political activism in 1980, when he put his television career on hold and founded People for the American Way with the late Congresswoman Barbara Jordan. The organization fights right-wing extremism and defends constitutional values under attack, including free expression, religious liberty, equal justice under the law, and the right to meaningfully participate in our democracy.

Lear was among the first group of television pioneers inducted into the Television Academy Hall of Fame in 1984. In 1999, he was awarded the National Medal of Arts. In 2017, Lear was a Kennedy Center honoree and received a Peabody Lifetime Achievement Award.  The following year, the City of Boston designated Oct. 4, 2018 as “Norman Lear Day.”

Television producer Mike Royce ’86 will speak at the ceremony. Royce works with Lear as an executive producer and co-showrunner of “One Day at a Time.”

The award ceremony will be live streamed on Thursday, Nov. 15 through the Park Media Network at approximately 7:30 p.m. PST. Lear will receive his award at the Paley Center for Media in Los Angeles.

The winners will receive prizes of $250, $150 and $100, respectively. The competition is open to non-produced or non-optioned writers only. Entries are judged by a panel of industry professionals, as well as Carol Serling, widow of the late Rod Serling.