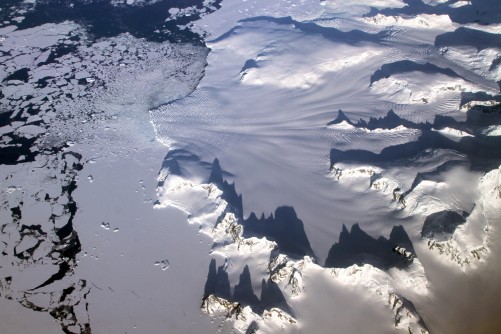 The gradual warming of the North and Tropical Atlantic Ocean is contributing to climate change in Antarctica, a team of NYU scientists has concluded. The findings, which rely on more than three decades of atmospheric data, show new ways in which distant regional conditions are contributing to Antarctic climate change. Below, several glaciers in the Antarctic Peninsula pass between sharp mountain peaks and converge in a single calving front, as seen by Operation IceBridge while returning from a survey of the Ronne Ice Shelf on Nov. 1, 2012. NASA's Operation IceBridge is an airborne science mission to study Earth's polar ice. For more information about IceBridge, visit: www.nasa.gov/icebridge.

Newswise — The gradual warming of the North and Tropical Atlantic Ocean is contributing to climate change in Antarctica, a team of New York University scientists has concluded. The findings, which rely on more than three decades of atmospheric data and appear in the journal Nature, show new ways in which distant regional conditions are contributing to Antarctic climate change.

“Our findings reveal a previously unknown—and surprising—force behind climate change that is occurring deep in our southern hemisphere: the Atlantic Ocean,” says Xichen Li, a doctoral student in NYU’s Courant Institute of Mathematical Sciences and the study’s lead author. “Moreover, the study offers further confirmation that warming in one region can have far-reaching effects in another.”

Over the past few decades, Antarctica has experienced dramatic climate change, with itspeninsula exhibiting the strongest warming of any region on the planet. During its summer, Antarctic changes have been attributed to greenhouse gas increase and stratospheric ozone loss. However, less clear are the forces behind climate changes that occur during its winter. In addition, the effects of these changes during the cold season are complex, further stifling efforts to find the atmospheric culprit.

It has long been known that the region’s climate is affected, in part, by changes in the distant Pacific Ocean climate. But the phenomena brought on by the Pacific have shorter-term influences—for instance, due to El Niño. Less understood are the longer-term forces that have produced warming along the Antarctic Peninsula or the sea-ice redistribution in the southern hemisphere’s winter over many decades.

To address this question, the NYU researchers focused on a different candidate: the Atlantic Ocean, which has been overlooked as a force behind Antarctic climate change.

Specifically, the scientists studied the North and Tropical Atlantic’s Sea Surface Temperature (SST) variability—changes in the ocean’s surface temperature—focusing on the last three decades. This metric, the Atlantic Multidecadal Oscillation (AMO), had previously not been considered in seeking explanations for Antarctic climate change.

Using a time-series analysis, in which the scientists matched changes in the North and Tropical Atlantic’s SST with subsequent changes in Antarctic climate, the researchers found strong correlations. Specifically, they observed that warming Atlantic waters were followed by changes in sea-level pressure in the Antarctic’s Amundsen Sea. In addition, these warming patterns also preceded redistribution of sea ice between the Antarctic’s Ross and Amundsen-Bellingshausen-Weddell Seas. David Holland, co-author of the study, a professor at NYU's Courant Institute and past director of NYU's Center for Atmospheric Ocean Science, explained that the research consisted of two parts, which incorporated both the use of observational data and computer modeling.

The first part of the study, using the observational data, found a link, or correlation, between the Atlantic and Antarctic data sets. But a correlation means simply that two things appear to happen in conjunction and does not explain what may be causing a phenomenon.

The second used a global atmospheric model, which allowed the researchers to create a simulated warming of the North Atlantic. The model responded, as the researchers had suspected, by "changing" the climate in Antarctica.

"While our data analysis showed a correlation, it was the use of a state-of-the-art computer model that allowed us to see that North Atlantic warming was causing Antarctic climate change and not vice versa," he said.

The study’s findings raise a number of deeper questions, such as, is Antarctic sea-ice change fundamentally different from the well-reported changes in the Arctic? In contrast to the sea-ice decline over the Arctic, Antarctic sea ice has not diminished. Rather, it has redistributed itself in ways that have perplexed scientists, with declines in some areas and increases in others.

Holland observes: “From this study, we are learning just how Antarctic sea-ice redistributes itself, and also finding that the underlying mechanisms controlling Antarctic sea ice are completely distinct from those in the Arctic.”

The study’s other authors included: Edwin Gerber, an assistant professor at the Courant Institute; and Changhyun Yoo, a Courant post-doctoral fellow.