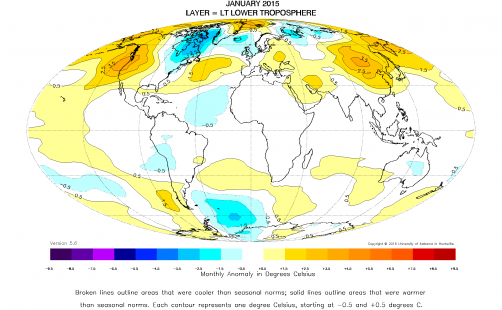 The northern portion of the globe saw its warmest January in the 36-year satellite record last month, according to Dr. John Christy, a professor of atmospheric science and director of the Earth System Science Center at The University of Alabama in Huntsville. “A large band of warmer than normal air stretched from China, and across the northern Pacific into western Canada and the western third of the U.S., which brought warm temperatures to the western U.S. and dry air to California. This was somewhat offset by the large area of much cooler than normal air that stretched from the eastern U.S. through Hudson Bay into the Arctic.”

Compared to seasonal norms, the warmest average temperature anomaly on Earth was off the west coast of the U.S. near Eugene, Oregon. The January temperature there was 4.03 C (about 7.25 degrees F) warmer than seasonal norms.

The northern extratropics (the non-tropical northern region) extends from 20 degrees to 85 degrees north latitude, or from about the latitude of Mexico City and the island of Hawai’i to a latitude a couple of degrees north of an island off the northern tip of Greenland — the northernmost tip of land on Earth.

At the same time, the anticipated El Niño Pacific Ocean warming event seems to be beginning to fizzle, with the warm temperature anomaly in the tropics falling 0.17 C — from +0.30 C in December to +0.13 C in January.

Compared to seasonal norms, the coolest average temperature on Earth in January was over southern Baffin Island, by Canada’s Auyuittuq National Park. The average January 2015 temperature there was +3.59 C (about 6.46 degrees F) cooler than normal.

Anyone accessing the satellite temperature anomaly dataset through the website should be aware that a problem in the code creating the USA49 column of numbers has been identified and corrected, changing the values reported for that column alone. 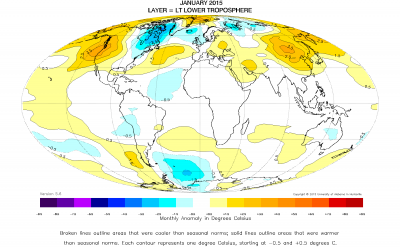