Students depart for selective universities in Midwest, Pennsylvania on April 17 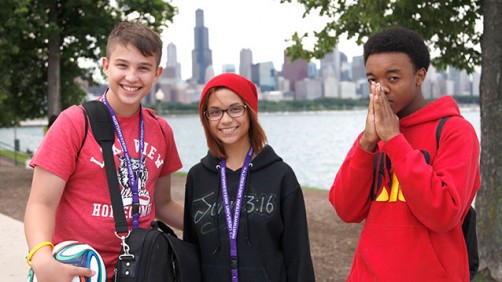 As part of Northwestern Academy for Chicago Public School’s first trip to research colleges, the high school juniors -- some joined by their parents -- will depart from Chicago April 17; one group will head to schools in Pennsylvania, while the other will tour top Midwest schools. A third group will explore college campuses this summer. Students are available for interviews.

The students are all first-generation college-bound, come from a low-income family or are part of a group traditionally underrepresented in higher education. These are the highly motivated teenagers who qualified for, but aren’t enrolled in, selective enrollment high schools.

The Academy’s goal is to provide rigorous college-prep work and personal enrichment at no cost to ambitious students who may need a boost to enroll in selective four-year colleges. Launched in 2013 by Northwestern’s School of Education and Social Policy, the partnership with Chicago Public Schools involves year-round tutoring, leadership training, confidence building, counseling, family workshops and field trips to cultural institutions such as the Steppenwolf Theatre and The Adler Planetarium.

“A firsthand look at what colleges have to offer is sure to inspire them even more,” said Northwestern Academy Director Cassandra Geiger. “It’s an essential part of their college process and in making decisions about future goals.”

Now in its third year, the Academy has two classes of students for a total enrollment of 129. The new freshman class is being selected, and the Academy will be running at full capacity in the summer of 2016.

Eight-four percent of the new students are first-generation, college-bound, and 97 percent come from low-income households. “All the students are academically high-achieving and motivated to pursue rigorous course work,” Geiger said.

The support extends well beyond academic advising and tutoring in math, chemistry and physics. The students also work on developing leadership and social skills and are exposed to cultural and civic programs.

During the last two years, in weekend and summer sessions held at Northwestern’s Center for Talent Development, the students worked on improving improvisational skills, critical thinking, writing, speaking and presentation. They explored Chicago’s cultural gems, including the Art Institute of Chicago, the Field Museum, the Alvin Ailey American Dance Theater and the Steppenwolf Theatre. And they have attended events on the Northwestern campus and Chicago Humanities Festival sessions.

“We stress exposure and exploration, trying to offer enriching experiences they might not have access to at home or at school,” Geiger said.

Northwestern Academy, which costs an estimated $5,000 to $6,000 per student per year to operate, is free for the students. The program is funded by Northwestern and donations. Prior to the college visits, the Academy students received a behind-the-scenes tour of Northwestern University, which included attending TEDxNorthwesternU sessions with the student group Promote 360 and eating lunch in the dining hall with undergraduates.

Northwestern is one of several top-caliber schools providing college access support. Northwestern’s program is unusual in that “we have group-based assignments which allows us to service more students and provide an individualized experience,” Geiger said.

"We are excited to be able to give our Northwestern Academy rising seniors the opportunity to visit excellent colleges and universities so that they can get a taste of life on different college campuses,” said Penelope Peterson, Dean of Northwestern’s School of Education and Social Policy.