Enhancement made possible thanks to gift from trustee Howard Trienens 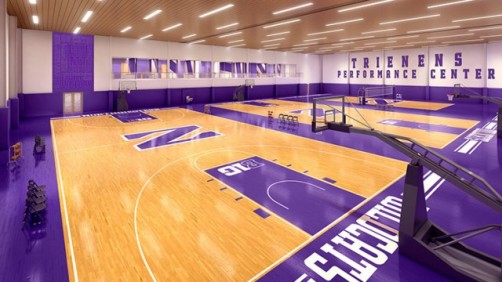 The Trienens Performance Center will feature a fieldhouse with three courts.

Newswise — EVANSTON, Ill. --- Northwestern University’s upcoming renovation of Welsh-Ryan Arena will include a state-of-the-art practice facility for basketball, volleyball and other Wildcats programs, the University announced Feb. 7. The enhancement is possible thanks in large part to a gift of up to $20 million from University trustee and alumnus Howard J. Trienens. In recognition of his continuing generosity, the facility will be named the Trienens Performance Center.

“Howard Trienens has been an enthusiastic supporter of Northwestern and our Athletics and Recreation programs for decades,” Northwestern President Morton Schapiro said. “These programs — and the entire University — have benefited significantly from his guidance and generosity. We are grateful for his continued leadership and for his years of service to Northwestern.”

The Trienens Performance Center will feature a fieldhouse with three courts constructed inside the existing Trienens Hall, adjacent to Welsh-Ryan Arena. The facility will allow for construction of larger team locker rooms inside the arena for men’s basketball, women’s basketball and volleyball. It also will include:

“Throughout the Welsh-Ryan Arena design process that began last summer, we have aggressively sought ways to maximize space available for our student-athletes on non-game days,” said Jim Phillips, Northwestern vice president for athletics and recreation. “Thanks to the incredible and lifelong generosity of the Trienens family, our basketball, volleyball and other Wildcats teams will have a first-class development facility to use 365 days each year.”

“The Trienens Performance Center is a game changer for the development of our student-athletes,” said Sullivan-Ubben Head Men’s Basketball Coach Chris Collins. “What was already a dramatic transformation for our Wildcats now has been elevated even further.”

Following the conclusion of the 2016-17 basketball season, Welsh-Ryan Arena and McGaw Hall will undergo a complete, $110-million renovation. The venue is slated to re-open in autumn of 2018. A leadership gift from Patrick G. and Shirley W. Ryan, along with a $10 million gift from Stephen R. and Susan K. Wilson, gifts from other loyal Northwestern benefactors and the existing athletics maintenance and equipment budget, will fund the project.

“The new Welsh-Ryan Arena will transform our game days, but this new facility will enhance the lives of our young women on a daily basis,” said Joe McKeown, Northwestern head women’s basketball coach. “This is just the latest example of how this University pursues excellence in all areas.”

“We promise recruits the premier student-athlete experience in the nation here at Northwestern,” said Shane Davis, Wildcats head volleyball coach. “The evolution of Welsh-Ryan Arena and the new Trienens Performance Center are enormous steps forward for our program and this community.”

Howard J. Trienens is a partner of Sidley Austin and former chair of Sidley’s executive committee. He practices corporate law and litigation in antitrust, regulatory and other matters. Trienens joined the firm in 1949 as an associate and became a partner in 1956. From 1980 to 1986 he also served as vice president and general counsel for AT&T.

Trienens received two degrees from Northwestern, a bachelor’s degree in 1945 and a J.D. in 1949, and was editor in chief of the Illinois Law Review. After graduating, he taught a course in criminal law at Northwestern University Pritzker School of Law and was clerk to Fred M. Vinson, former chief justice of the United States. Trienens received an honorary law degree from Northwestern in 1995 and was awarded the Alumni Medal, the University’s highest alumni honor, the following year. In 2013, he was the first recipient of the law school’s Distinguished Alumni Award.

Trienens is a platinum member of NU Loyal, Northwestern’s giving society honoring consistent annual giving to the University, with 44 consecutive years of giving to Northwestern. His support has benefited numerous areas across Northwestern, including Athletics and Recreation; Northwestern Medicine; the Bienen School of Music; the Medill School of Journalism, Media, Integrated Marketing Communications; University Libraries; Kellogg School of Management; and Pritzker School of Law. In addition, Trienens’ colleagues at Sidley Austin established the Howard J. Trienens Chair and the Howard J. Trienens Visiting Judicial Scholar Program at the law school to honor Trienens’ service to the firm and to Northwestern University.

Trienens’ latest gift counts toward the University-wide fundraising initiative We Will. The Campaign for Northwestern. Publicly launched in 2014, the “We Will” Campaign has raised more than $3.3 billion from more than 126,000 supporters.

During the renovation, Northwestern men’s basketball will host home games at Allstate Arena in Rosemont.

The funds raised through the “We Will” Campaign are helping realize the transformational vision set forth in Northwestern’s strategic plan and solidify the University’s position among the world’s leading research universities. More information on We Will. The Campaign for Northwestern is available at wewill.northwestern.edu.