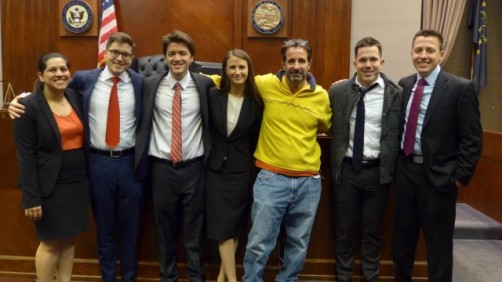 Newswise — CHICAGO - A team from Northwestern University Pritzker School of Law’s Bartlit Center on Trial Advocacy will compete for the national championship of the National Trial Competition in Fort Worth, Texas, in March after capturing first place at the Midwest regionals held at Valparaiso University Law School.

Another Bartlit Center team with Natasha Karamally (JD ’18), Deven Klee (JD ’18) and Brendan Gerdes (JD ’18) took second place in the other bracket of the same tournament. Both teams were coached by Rick Levin of the Levin Riback Law Group.

“Our students are extremely talented and dedicated,” Levin said. “In 10 years of coaching, Stacy Kapustina is the only student who has qualified for the national finals in both her 2L and 3L years.”

Over the same weekend, the Law School’s ABA Labor Law team advanced to the final round and captured second place at the national ABA Labor Law Competition in New Orleans after winning the Midwest regional in the fall.

The team was coached by Robert Robertson and Marko Duric (JD ’12) of Robertson Duric, and Kendrick Washington (JD ’10) of the U.S. Department of Education, Office for Civil Rights.

“This has been a year of tremendous success for our ABA Labor Law teams, who have put in countless hours perfecting their skills, while maintaining the highest standards of professionalism,” Washington said.

Added Duric: “What stood out about these exceptional students, among many other things, was that they possess the skill and the character to enter any courtroom in the country and try real cases.”

Steven Lubet, the Williams Memorial Professor of Law and the director of the Bartlit Center for Trial Advocacy, said it was the first time that three Bartlit Center trial teams have reached competition finals in a single weekend.

“Our students are outstanding and our coaches are exemplary,” Lubet said. “We are tremendously proud of all of them.”