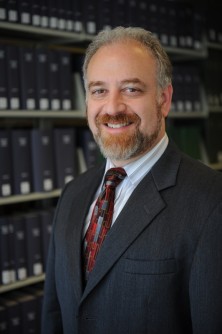 Garon is currently a tenured professor of law and founding director of the Chase Law + Informatics Institute (an interdisciplinary program in law, business and technology) at Northern Kentucky University in Highland Heights, Ky. He will commence his appointment on July 1.

In his role, Garon will serve as the chief academic and administrative officer of the Law Center, working with a remarkably diverse community of scholars and students in the creation of new programs and initiatives for its students, graduates, and members of the bar.

Garon succeeds Athornia Steele, J.D., who stepped down in September 2013, but will return to teaching at the Law Center after a short sabbatical. Elena B. Langan, J.D., professor of law and associate dean for academic affairs has served as interim dean and will return to her previous duties.

“Mr. Garon’s academic achievements, engaging vision, and passion for the law and the future of legal education, make him ideally suited to build upon the excellent work of his predecessors and to further advance the visibility of the Law Center,” said President Hanbury.

Previously, Garon served as dean of the Hamline University School of Law in St. Paul, Minn., where he also served as interim dean of its School of Business. Prior to that, he served as a member of the faculty at the University of New Hampshire School of Law in Concord. At Hamline University, Garon created and advanced law school programs to national ranking and secured approval for two joint degree programs. In his relatively brief time at Northern Kentucky University, he grew the Chase Law + Informatics Institute to national acclaim as one of the top 13 law school’s nationwide teaching law practice technology and securing the school’s first $1 million donation to name the W. Bruce Lunsford Academy for Law, Business and Technology.

A noted authority in the study of the future of legal education, having served as past chair of the American Bar Association’s Law School Administration Committee and American Association of Law Schools Section on Part-Time Legal Education, Garon’s scholarship extends broadly over the areas of emerging technologies, and their impact on business, society, the practice of law and delivery of legal education, as well as the field of entertainment law.

Garon received his Bachelors of Arts in Psychology and Theater from the University of Minnesota in Minneapolis and his Juris Doctor from Columbia Law School in New York where he was a Harlan Fiske Stone Scholar.

About the Shepard Broad Law Center: Nova Southeastern University’s Law Center offers a rigorous traditional academic program in three-year day and four-year evening versions. NSU Law prides itself on preparing graduates to make a smooth transition from the classroom to the courtroom or boardroom. Lawyering Skills and Values (LSV)-Every student completes a four-semester LSV sequence that combines traditional legal reasoning, writing, and research with an introduction to lawyer interviewing, counseling, negotiating, mediating, advocating, and other critical skills in a simulated law firm experience.

About Nova Southeastern University: Situated on 314 beautiful acres in Ft. Lauderdale, Florida, Nova Southeastern University (NSU) is a dynamic fully accredited research institution dedicated to providing high-quality educational programs at all levels. NSU is a not-for-profit independent institution with 27,000 students. NSU awards associate’s, bachelor’s, master’s, specialist, doctoral and first-professional degrees in a wide range of fields. NSU is classified as a research university with “high research activity” by the Carnegie Foundation for the Advancement of Teaching, and it is one of only 37 universities nationwide to also be awarded Carnegie’s Community Engagement Classification. For more information, please visit www.nova.edu. Celebrating 50 years of academic excellence!