31-May-2016 9:05 AM EDT, by University of Chicago Medical Center contact patient services
favorite_border 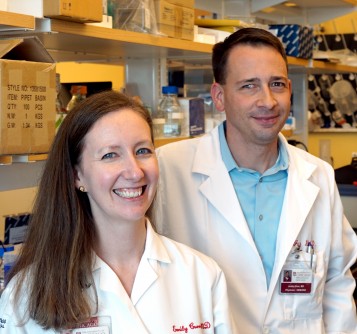 Newswise — A protein known as STING plays a crucial role in the immune system’s ability to “sense” cancer by recognizing and responding to DNA from tumor cells. Injection of compounds that activate the STING pathway directly into solid tumors in mice has been shown in prior studies to result in very potent anti-tumor immune responses.

In the June 14, 2016, issue of Cell Reports, researchers from the University of Chicago show that by injecting substances that mimic tumor-cell DNA into the bloodstream, they could stimulate STING to provoke a life-extending immune response in mice with acute myeloid leukemia (AML), the most common type of acute leukemia seen in adults.

This is the first demonstration that activating the STING pathway could be effective not only in solid, localized tumors such as melanoma, but also in widely disseminated “liquid” cancers, such as leukemia.

“Delivery of these substances into the blood led to massive immune responses,” said Justin Kline, MD, assistant professor of medicine at the University of Chicago and senior author of the study. “I’ve worked extensively with animal models of this disease, and have never seen responses like this.”

STING – short for STimulator of INterferon Genes – plays a central role in detecting threats, such as viral infections or cancer. STING is activated when DNA turns up in the wrong place, inside the cell but outside the nucleus.

When it encounters such misplaced DNA, STING induces the production of an immune stimulant, interferon-beta, as well as other chemical signals that recruit certain components of the immune system to manage the threat, such as leukemia-specific killer T cells.

Emily Curran, MD, a clinical instructor in hematology/oncology working in Kline’s laboratory, and first author of the study, found that mice with established AML were rarely able to launch an effective immune response against the disease. But when the researchers exposed mice with AML to DMXAA (5,6-dimethylxanthenone-4-acetic acid), a molecule that activates STING, the immune system responded aggressively, culminating in the activation of highly potent, cancer-cell killing T cells.

This response prolonged survival and, in some cases, cured the mice of their leukemia. About 60 percent of DMXAA-treated mice survived long-term. They were even able to protect themselves when “re-challenged” with AML cells.

Because of significant differences between mice and humans, DMXAA does not activate the human STING pathway, but researchers have found that several cyclic dinucleotides – signaling molecules produced by bacteria – have a comparable effect in stimulating the STING pathway. This leads to an immune response that begins with the production of type I interferons and proceeds to later, more powerful stages, ultimately including leukemia-specific T cells.

Kline emphasizes that their approach is “not without risk.” It can induce “a lot of inflammation, fever, even shock.” Such a stimulated immune system can be “too effective,” he said, especially when the therapy is given through the blood stream, rather than injected into a solid tumor.

“I think drug makers will want to focus on intra-tumoral injection studies before they are ready to bet on systemic infusion,” he said. “But this is an important first step.”

The National Institutes of Health, the University of Chicago Institute for Translational Medicine and the Cancer Research Institute funded this study. Additional authors were Emily Curran, Xiufen Chen, Leticia Corrales, and Douglas Kline from the University of Chicago; Thomas Dubensky from Aduro Biotech Inc., Berkeley Calif.; and Priyanka Duttagupta and Martin Kortylewski from the Beckman Research Institute at City of Hope, Duarte, Calif.