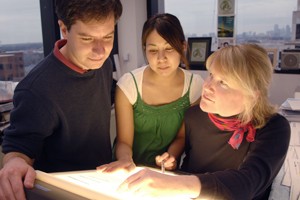 Dr. David Corey, professor of pharmacology, graduate student Rosalyn Ram and Dr. Bethany Janowski, assistant professor of pharmacology, have activated certain genes in cultured cells using strands of RNA to perturb the mixture of proteins that surround chromosomal DNA, proteins that control whether genes are turned on or off. The new technique could lead to therapeutics for conditions in which nudging a gene awake would help alleviate disease.

Newswise — A new technique that employs RNA, a tiny chemical cousin of DNA, to turn on genes could lead to therapeutics for conditions in which nudging a gene awake would help alleviate disease, researchers at UT Southwestern Medical Center say.

The gene-activating method, which is being developed by UT Southwestern scientists, also is providing researchers with a novel research tool to investigate the role that genes play in human health.

In a paper appearing online at Nature Chemical Biology and in an upcoming edition of the journal, lead author Dr. Bethany Janowski, assistant professor of pharmacology at UT Southwestern, and her colleagues describe how they activated certain genes in cultured cells using strands of RNA to perturb the delicately balanced mixture of proteins that surround chromosomal DNA, proteins that control whether genes are turned on or off.

Dr. David Corey, professor of pharmacology and the paper's senior author, said the results are significant because they demonstrate the most effective and consistent method to date for coaxing genes into making the proteins that carry out all of life's functions " a process formally called gene expression.

In any medical specialty, Dr. Janowski said, there are conditions where increased gene expression would prove beneficial.

"In some disease states, it's not that gene expression is completely turned off, but rather, the levels of expression are lower than they should be," she said. As a result, there is an inadequate amount of a particular protein in the body. "If we can bring the level up a few notches, we might actually treat or cure the disease," Dr. Janowski said.

For example, some genes are natural tumor suppressors, and using this method to selectively activate those genes might help the body fend off cancer, Dr. Janowski said.

Genes are segments of DNA housed in chromosomes in the nucleus of every cell and they carry instructions for making proteins. Faulty or mutated genes lead to malfunctioning, missing or over-abundant proteins, and any of those conditions can result in disease.

Surrounding the chromosome is a cloud of proteins that helps determine whether or not a particular gene's instructions are "read" and "copied" to strands of messenger RNA, which then ferry the plans to protein-making "factories" in the cell.

In its experiments, the UT Southwestern team used strands of RNA that were tailor-made to complement the DNA sequence of a specific gene in isolated breast cancer cells. Once the RNA was introduced into the protein mix, the gene was activated, ultimately resulting in a reduced rate of growth in the cancer cells.

Dr. Corey said that while it's clear the activating effects of the new technique are occurring at the chromosome level, and not at the messenger RNA level, more research is needed to understand the exact mechanism.

Although the RNA strands the researchers introduced " dubbed antigene RNA " were manufactured, Dr. Corey said the process by which they interact with the chromosome appears to mimic what naturally happens in the body.

"One of the reasons why these synthetic strands work so well is that we're just adapting a natural mechanism to help deliver a man-made molecule," Dr. Corey said. "We're working with nature, rather than against it."

Drs. Corey's and Janowski's current results are built on previous work, published in 2005 in Nature Chemical Biology, in which they found that RNA strands could turn off gene expression at the chromosome level.

The new UT Southwestern research, coupled with that from 2005, demonstrates a shift away from conventional thinking about how gene expression is naturally controlled, as well as how scientists might be able to exploit the process to develop new drug targets, Dr. Corey said.

For example, current methods to block gene expression, such as RNA interference, rely on using RNA strands to intercept and bind with messenger RNA. While RNA interference is an effective tool for studying gene expression, Dr. Janowski said, it's more efficient to use RNA to control both activation and de-activation at the level of the chromosome.

Dr. Corey said many researchers have the ingrained idea that RNA only targets other RNA " such as what occurs when messenger RNA is targeted during RNA interference. "That's what everyone is familiar with," he said. "But the idea of RNA being used as a sort of nucleic acid modulator of chromosomes, at the level of the chromosome itself, is novel and unexpected, and it's going to take some getting used to."

The study was supported by the National Institutes of Health, Susan G. Komen for the Cure and the Robert A. Welch Foundation.

UT Southwestern Medical Center, one of the premier medical centers in the nation, integrates pioneering biomedical research with exceptional clinical care and education. Its more than 1,400 full-time faculty members " including four active Nobel Prize winners, more than any other medical school in the world " are responsible for groundbreaking medical advances and are committed to translating science-driven research quickly to new clinical treatments. UT Southwestern physicians provide medical care in 40 specialties to nearly 89,000 hospitalized patients and oversee 2.1 million outpatient visits a year.