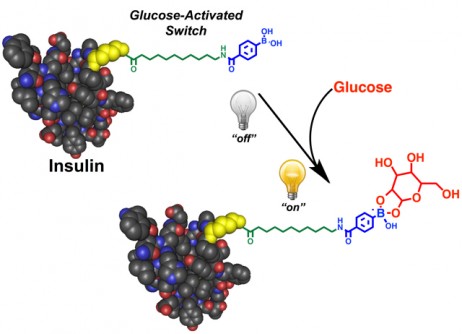 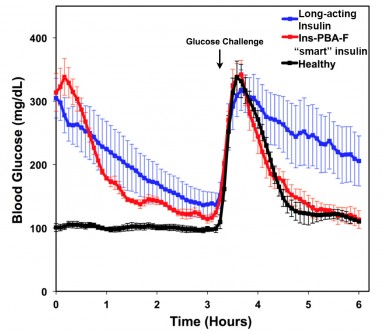 At time 0 mouse with a diabetes-like condition were given a long-acting insulin that is currently prescribed to diabetics (blue), or Ins-PBA-F “smart” insulin (red) and compared to healthy mice that were not injected with insulin (black). At 3 hours, the mice were given a dose of sugar. Blood glucose levels were monitored every 5 minutes. Blood sugar returns to normal as quickly in diabetic mice treated with Ins-PBA-F “smart” insulin as in healthy mice.

Newswise — For patients with type 1 diabetes (T1D), the burden of constantly monitoring their blood sugar and judging when and how much insulin to self-inject, is bad enough. Even worse, a miscalculation or lapse in regimen can cause blood sugar levels to rise too high (hyperglycemia), potentially leading to heart disease, blindness and other long-term complications, or to plummet too low (hypoglycemia), which in the worst cases can result in coma or even death.

To mitigate the dangers inherent to insulin dosing, a University of Utah biochemist and fellow scientists have created Ins-PBA-F, a long-lasting “smart” insulin that self-activates when blood sugar soars. Tests on mouse models for type 1 diabetes show that one injection works for a minimum of 14 hours, during which time it can repeatedly and automatically lower blood sugar levels after mice are given amounts of sugar comparable to what they would consume at mealtime.

Ins-PBA-F, acts more quickly, and is better at lowering blood sugar, than long-acting insulin detimir, marketed as LEVIMIR. In fact, the speed and kinetics of touching down to safe blood glucose levels are identical in diabetic mouse models treated with Ins-PBA-F and in healthy mice whose blood sugar is regulated by their own insulin. A study showing these findings will be published Feb. 9 in PNAS Early Edition.

"This is an important advance in insulin therapy," says co-first author Danny Chou, Ph.D., USTAR investigator and assistant professor of biochemistry at the University of Utah. “Our insulin derivative appears to control blood sugar better than anything that is available to diabetes patients right now.” He will continue evaluating the long-term safety and efficacy of Ins-PBA-F. The insulin derivative could reach Phase 1 human clinical trials in two to five years.

“At present, there is no clinically approved glucose-responsive modified insulin,” says Matthew Weber, Ph.D., co-first author with Chou and Benjamin Tang, Ph.D., who performed the work together while postdoctoral fellows at MIT in collaboration with senior authors and MIT professors Robert Langer, Ph.D., and Daniel Anderson, Ph.D. “The development of such an approach could contribute to greater therapeutic autonomy for diabetic patients.”

The hallmark symptom of diabetes is inadequate control of blood sugar. The deficit is most pronounced in type 1 diabetes, which develops when insulin-producing beta-cells of the pancreas are destroyed. Without insulin, there is no way to shuttle sugar out of the blood and into cells, where it is used for energy. T1D patients depend on daily insulin injections for survival.

Despite advances in diabetes treatment such as insulin pumps and the development of four types of insulin, patients must still manually adjust how much insulin they take on a given day. Blood sugar levels vacillate widely depending on a number of factors such as what someone chooses to eat and whether they exercise.

A glucose-responsive insulin that is automatically activated when blood sugar levels are high would eliminate the need for additional boosts of insulin, and reduce the dangers that come with inaccurate dosing. Various such “smart” insulins under development typically incorporate a protein-based barrier, such as a gel or coating, that inhibits insulin when blood sugar is low. However, such biologically based components are often sources of trouble, provoking unwanted side effects such as an immune response.

Ins-PBA-F differs in that it was created by chemically modifying insulin directly. Ins-PBA-F consists of a long-acting insulin derivative that has a chemical moiety, phenylboronic acid (PBA), added to one end. Under normal conditions, Ins-PBA-F binds to serum proteins that circulate in the bloodstream, blocking its activity. When blood sugar levels are high, glucose sugars bind PBA, which acts like a trigger to release Ins-PBA-F so it can get to work.

“Before, a ‘smart’ insulin really meant delivering insulin differently,” says Chou. “Ins-PBA-F fits the true definition of ‘smart’ insulin, where the insulin itself is glucose responsive. It is the first in its class.”

Chou explains that because Ins-PBA-F is a chemically modified version of a naturally occurring hormone, he thinks it is likely to be safe enough to use on a daily basis, similar to other insulin derivatives that are on the market today.

“My goal is to make life easier, and safer for diabetics,” he says. 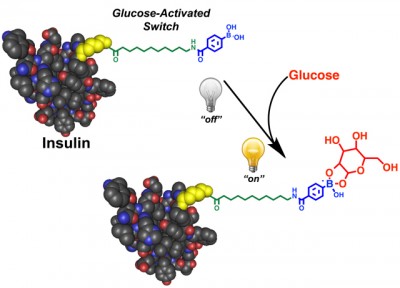 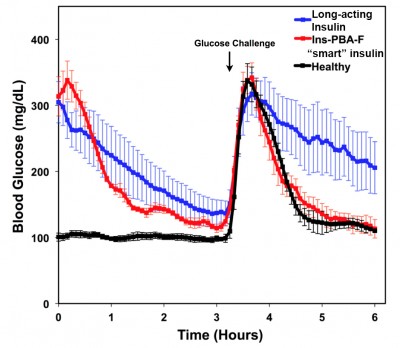 Caption: At time 0 mouse with a diabetes-like condition were given a long-acting insulin that is currently prescribed to diabetics (blue), or Ins-PBA-F “smart” insulin (red) and compared to healthy mice that were not injected with insulin (black). At 3 hours, the mice were given a dose of sugar. Blood glucose levels were monitored every 5 minutes. Blood sugar returns to normal as quickly in diabetic mice treated with Ins-PBA-F “smart” insulin as in healthy mice.