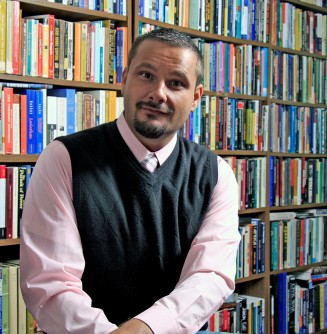 NSU is home to a Subject Matter Expert Who Can Speak to Islamic Fundamentalism, Terrorism, ISIS and Middle Eastern Politics

Newswise — FORT LAUDERDALE/DAVIE, Fla. – Nova Southeastern University (NSU) is home to Dustin Berna, Ph.D., an expert in the areas of ISIS (ISIL) Middle Eastern politics, Islamic fundamentalism and terrorism. Dr. Berna is available to talk with reporters who are working stories related to the tragic incident that occurred in New York.

Dr. Berna has extensive experience working with the media – print and broadcast – in front of a camera or via telephone. If you are looking for an expert who can talk about ISIS, who they are, where they came from, what they want and how they are infiltrating the U.S. borders to influence domestic terrorism, Dr. Berna can help.

Dr. Berna is an assistant professor of Conflict Resolution and Political Science at Nova Southeastern University's (NSU) College of Arts, Humanities, and Social Sciences. He is also the director of Assessment and Planning for the college.

Dr. Berna has written numerous articles on topics that range from terrorism and Islamic fundamentalism to Iranian political institutions and Islamic democracy. He has recently finished a book on ISIS, Ignorance, Isis, and Indoctrination: The World of Islamic Fundamentalism. His book is currently under review at Duke University Press and is expected to be published in 2016.

Dr. Berna earned his doctorate from the University of New Orleans in 2008. His two major fields of study were Middle Eastern politics and international relations. American political institutions were third and minor field. His dissertation was a quantitative study that evaluated the causes and electoral success of Islamic fundamentalist movements. Berna has collected and coded every Islamic fundamentalist group that is, or has been, in operation in the Islamic world since 1970.

About Nova Southeastern University (NSU): Ranked among US News & World Report’s Top 200 National Research Universities and located in beautiful Fort Lauderdale, Florida, Nova Southeastern University (NSU) is a dynamic research institution dedicated to providing high-quality educational programs at the undergraduate, graduate, and first-professional degree levels. A private, not-for-profit institution, NSU has campuses in Fort Lauderdale, Fort Myers, Jacksonville, Miami, Miramar, Orlando, Palm Beach, and Tampa Bay, Florida, as well as San Juan, Puerto Rico, while maintaining a presence online globally. For more than 50 years, NSU has been awarding degrees in a wide range of fields, while fostering groundbreaking research and an impactful commitment to community. Classified as a research university with “high research activity” by the Carnegie Foundation for the Advancement of Teaching, NSU is 1 of only 50 universities nationwide to also be awarded Carnegie’s Community Engagement Classification, and is also the largest private, not-for-profit institution in the United States that meets the U.S. Department of Education's criteria as a Hispanic-serving Institution. Please visit www.nova.edu for more information about NSU and realizingpotential.nova.edu for more information on the largest fundraising campaign in NSU history.