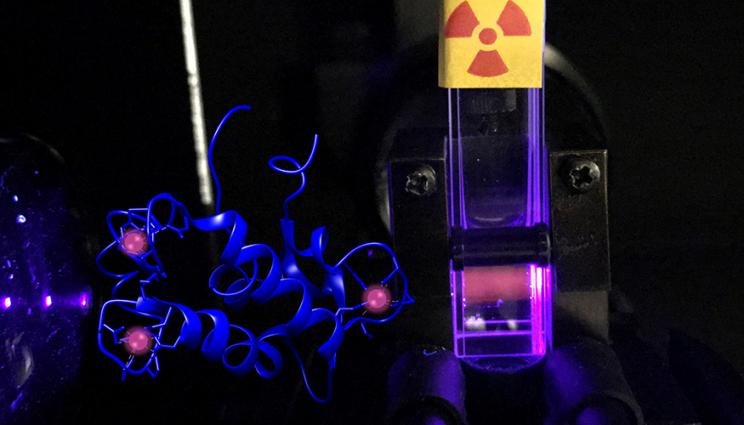 The glowing/pinkish sample on the right side is an actual sample containing radioactive curium and the protein lanmodulin, during a fluorescence spectroscopy experiment at LLNL. The protein makes curium glow when exposed to UV light. In the presence of the protein, curium luminescence becomes strong enough to be observed by the naked-eyes. The schematic represents the structure of the curium-protein complex, with three curium atoms bound per molecule of protein.

Newswise — Lawrence Livermore National Laboratory (LLNL) scientists and collaborators proposed a new mechanism by which nuclear waste could spread in the environment.

The new findings, that involve researchers at Penn State and Harvard Medical School, have implications for nuclear waste management and environmental chemistry. The research is published in the Journal of the American Chemical Society.

“This study relates to the fate of nuclear materials in nature, and we stumbled upon a previously unknown mechanism by which certain radioactive elements could spread in the environment,” said LLNL scientist and lead author Gauthier Deblonde. “We show that there are molecules in nature that were not considered before, notably proteins like ‘lanmodulin’ that could have a strong impact on radioelements that are problematic for nuclear waste management, such as americium, curium, etc.”

Past and present nuclear activities (energy, research, weapon tests) have increased the urgency to understand the behavior of radioactive materials in the environment. Nuclear wastes containing actinides (ex: plutonium, americium, curium, neptunium...) are particularly problematic as they remain radioactive and toxic for thousands of years.

However, very little is known about the chemical form of these elements in the environment, forcing scientists and engineers to use models to predict their long-term behavior and migration patterns. Thus far, these models have only considered interactions with small natural compounds, mineral phases and colloids, and the impact of more complex compounds like proteins has been largely ignored. The new study demonstrates that a type of protein that is abundant in nature vastly outcompetes molecules that scientists previously considered as the most problematic in terms of actinide migration in the environment.

“The recent discovery that some bacteria specifically use rare earth elements has opened new areas of biochemistry with important technological applications and potential implications for actinide geochemistry, because of chemical similarities between the rare earths and actinides” said Joseph Cotruvo Jr., Penn State assistant professor and co-corresponding author on the paper.

The protein called lanmodulin is a small and abundant protein in many rare earth-utilizing bacteria. It was discovered by the Penn State members of the team in 2018. While the Penn State and LLNL team has studied in detail how this remarkable protein works and how it can be applied to extract rare earths, the protein’s relevance to radioactive contaminants in the environment was previously unexplored.

“Our results suggest that lanmodulin, and similar compounds, play a more important role in the chemistry of actinides in the environment than we could have imagined,” said LLNL scientist Annie Kersting. “Our study also points to the important role that selective biological molecules can play in the differential migration patterns of synthetic radioisotopes in the environment.”

“The study also shows for the first time that lanmodulin prefers the actinide elements over any other metals, including the rare earth elements, an interesting property than could be used for novel separation processes,” said LLNL scientist Mavrik Zavarin.

Rare earth element biochemistry is a very recent field that Penn State and LLNL have helped to pioneer, and the new work is the first to explore how the environmental chemistry of actinides may be linked to nature’s use of rare earth elements. Lanmodulin’s higher affinity for actinides might even mean that rare earth-utilizing organisms that are ubiquitous in nature may preferentially incorporate certain actinides into their biochemistry, according to Deblonde.

The LLNL portion of the work is partially funded by LLNL’s Laboratory Directed Research and Development program. The DOE Office of Science funded the Penn State work and the National Institutes of Health funded the Harvard research.