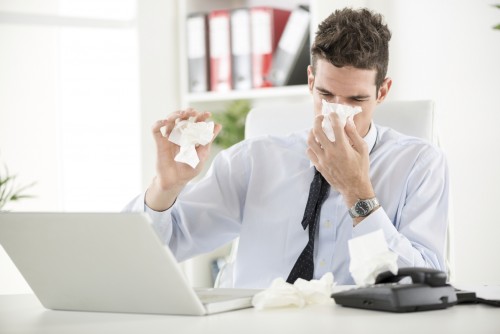 Unlike most industrialized countries, in the U.S, paid sick leave is inconsistently included as part of workplace benefits packages, and only 72 percent of working Americans have access to this benefit. Furthermore, some localities mandate the provision of a range of paid sick leave days annually depending on employer size.

Newswise — How much is enough? That is what researchers from Florida Atlantic University and Cleveland State University wanted to find out in the first study to measure the link between an employee’s number of paid sick leave days and the use of vital preventive health care services like getting a flu shot.

By measuring specific preventive health care services among American workers age 49 to 57, the researchers have figured out the optimal range of paid sick leave days that will make a difference in how these workers take care of themselves. They have found that it takes at least 10 or more paid sick leave days to significantly increase the odds that American workers get a flu shot, check their cholesterol, check their blood pressure, and get a fasting blood sugar test to check for diabetes. For female workers, they need at least six to nine paid sick leave days to see significantly increased odds of getting a mammogram.

Results from this study provide compelling evidence that workers in the United States with paid sick leave are significantly more likely to engage in preventive health care behaviors than those without paid sick leave.

Prior research has only focused on the consequences of the presence or absence of paid sick leave days. This study, “How Many Sick Days Are Enough?,” published in the Journal of Occupational and Environmental Medicine, helps to fill that gap. Findings also reveal a disconnect between the number of days typically offered to workers in the U.S. and the number of days where the researchers observed changes in preventive health care use.

“It took 10 or more days — more days than are mandated in any of the local U.S. paid sick leave laws – for us to see statistically significant increases in the likelihood of reporting having received a flu vaccination, mammography, and screenings for blood sugar and blood pressure,” said LeaAnne DeRigne, Ph.D., lead author of the study and an associate professor in the Phyllis and Harvey Sandler School of Social Work within FAU’s College for Design and Social Inquiry. “For policy makers who want to increase preventive health care services use in this age group, a longer and more generous paid sick leave plan of at least 10 days should be considered.”

“Preventive care is intended to catch medical conditions before they progress as well as preventing the spread of contagious diseases like influenza, which has reached epidemic proportions this year,” said DeRigne. “Despite having access, Americans only get half of the recommended requirements for preventive health care services. There are many factors that contribute to this dilemma, including adequate paid sick leave days.”

Unlike most industrialized countries, in the U.S, paid sick leave is inconsistently included as part of workplace benefits packages, and only 72 percent of working Americans have access to this benefit. Furthermore, some localities mandate the provision of a range of paid sick leave days annually depending on employer size.

DeRigne and Patricia Stoddard-Dare, Ph.D., co-author of the study and an associate professor of social work at Cleveland State University, caution that unless benefits are made equitable across employer size, Americans working for smaller companies will always have fewer paid sick leave days. On the clinical side, they suggest expanded evening and weekend office hours and bringing routine preventive care services to the workplace. They also urge service related industries like restaurants and day care providers to give their employees adequate time off when they are sick as these employees typically have very low rates of paid sick leave days.

“Lack of paid sick leave not only influences work health, it also influences public health,” said Stoddard-Dare. “Workers who lack paid sick leave are more likely to go to work when they are sick and spread contagious diseases, such as influenza, in the workplace. Paid sick leave is incredibly valuable because it provides both job protection and pay during times when employees must miss work for health related reasons.”

the Journal of Occupational and Environmental Medicine