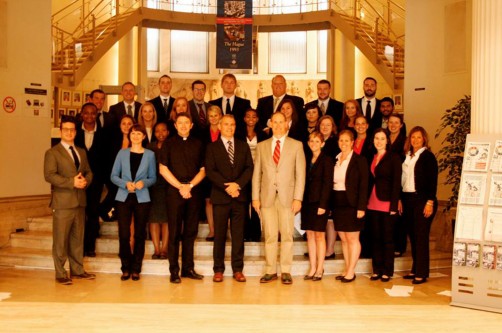 The 2014 participants in Creighton's Nuremberg trip. 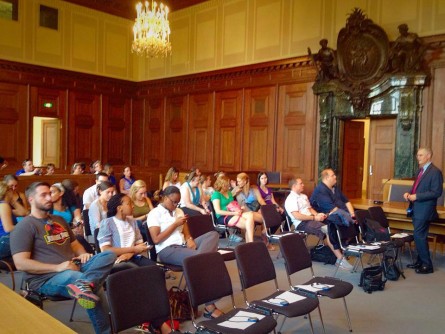 Creighton students listen to a lecture in the Nuremberg Palace of Justice, site of the trials of Nazi war criminals who perpetrated the Holocaust. 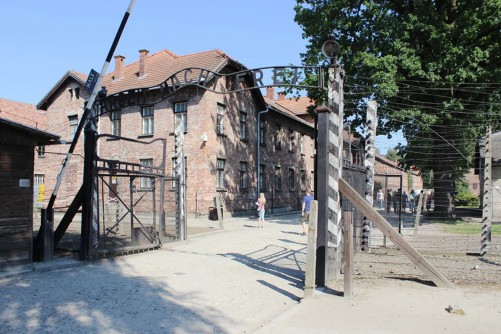 The gates to the Auschwitz concentration camp in Poland. Along with educational sessions in Nuremberg, Creighton students also visit scenes of the crime and make a trip to The Hague, to observe international criminal proceedings there.

This is the evidence confronting visitors to the world’s largest murder scene at Auschwitz, the Nazi concentration camp in Poland where more than 1 million people, most of them Jews, were systematically killed for no offense but their race. For the past three years — in the only program of its kind in the U.S. — Creighton University law students have been traveling to Auschwitz as part of a month-long summer study abroad session in Nuremberg, where the crimes of the Holocaust were prosecuted, to bear continued witness to the workings of international law and how its emergence in the aftermath of World War II brought justice to the murderers and shed light on their crimes for all the world.

“As far as an educational experience, it’s about as powerful as it gets,” said Billy McCroy, a second-year law student on the 2014 trip. “Standing in the courtroom at Nuremberg or standing in the gas chambers at Auschwitz, you realize that this is what we did to try to stop something like the Holocaust from happening again. We were going to have a trial, there would be evidence, there would be a verdict and justice would be served. As a law student, you are consumed by that, but as a human being, you are moved by what transpired in those places.”

The aim of the program has been to open law students to the idea of international law, a concept pioneered by the U.S. in the aftermath of World War II, largely through the efforts of Supreme Court Justice Robert Jackson, who took a one-year sabbatical from the Court to serve as chief prosecutor at Nuremburg. Students take classes on international law, participate in a moot court session in the very room where Jackson argued at the Nuremberg Palace of Justice and interact with other students and professors from around the world.

“We thought going to Nuremberg to see what Justice Jackson had done and what it meant to show the world what a democratic system of justice looked like was an experience that every legal scholar should have,” Kelly said. “In truth, it’s an experience all of us, as human beings, should have.”

This year, the 70th anniversary of the onset of the Nuremberg trials, another contingent of Creighton students will head overseas for an experience that’s educational, emotional and world-enlarging.

They will also take in court sessions at the International Criminal Court in The Hauge, Netherlands. Last year, students witnessed a portion of the trial for Ratko Mladić, a military officer accused of genocide in the Bosnian War.

In all those moments, even watching as Mladić openly mocked his prosecutors, there was a clear lesson in why war crimes are prosecuted through the due process of a trial.“To have an experience where you are seeing history played out in an international courtroom like that was really unbelievable,” said Kimberly Jeter, who graduated from the law school this spring and was on last summer’s Nuremberg trip. “As American law students, that might be the closest we get to international law. Like everything on that trip — Nuremberg, Dachau, Auschwitz — it’s something that’s going to stick with me.”

While Kelly’s students approach Nuremberg and Auschwitz with the specially sharpened minds of lawyers, taking in the crime scene and the evidence there, along with the defendants and the witnesses, he said they also have another purpose.

“One is the human experience of being there, in what is still intact as a crime scene at Auschwitz,” he said. “On another level, these students will one day be lawyers. They are being trained to look at evidence and to view a crime scene with a certain set of eyes. Auschwitz is the most extant, most extensive crime scene in the world and it is impossible not to be moved by what you see there, even as legal scholars in training. Perhaps the most teachable moment of my career is standing in a gas chamber at Auschwitz in complete silence. People ask me, ‘How can that be a teachable moment, when you’re not saying anything at all?’ It just is. There’s nothing more that can or needs to be said.” 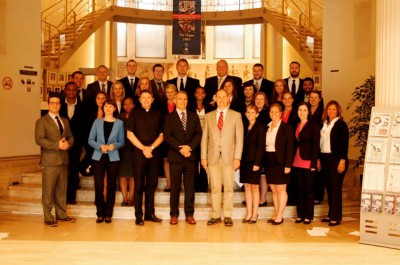 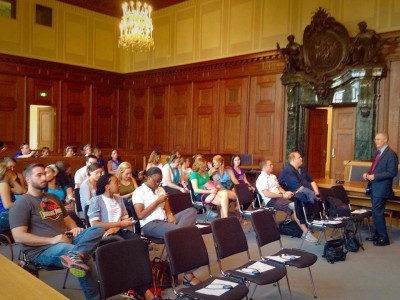 Caption: Creighton students listen to a lecture in the Nuremberg Palace of Justice, site of the trials of Nazi war criminals who perpetrated the Holocaust. 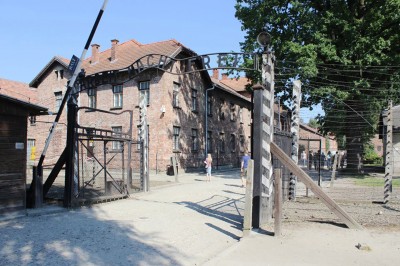 Caption: The gates to the Auschwitz concentration camp in Poland. Along with educational sessions in Nuremberg, Creighton students also visit scenes of the crime and make a trip to The Hague, to observe international criminal proceedings there.